The football legend goes for his third act. 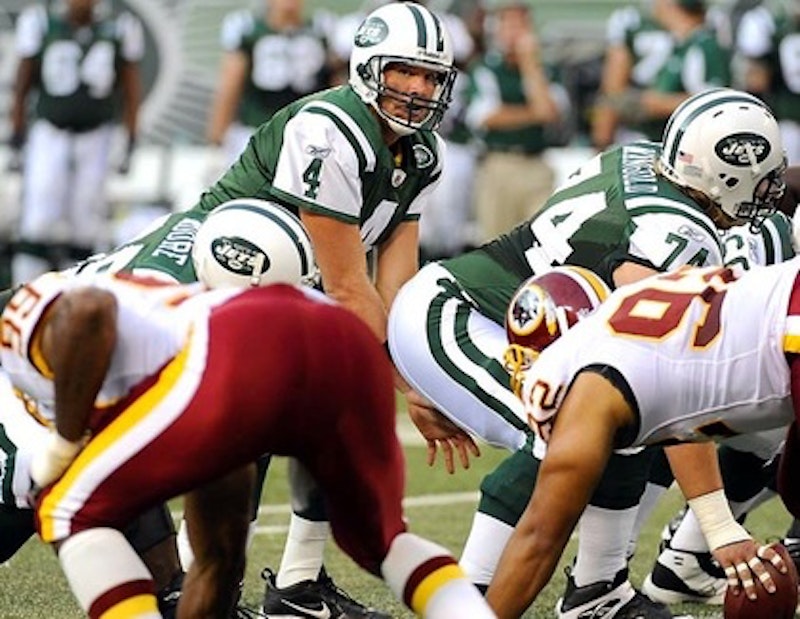 With both his retirements still fresh in the minds of football fans everywhere, Brett Favre is packing up his bags once again, this time on his way to joining the United Football League for its inaugural 2009 season. Many people predicted Favre would not be inactive for long, but few could have anticipated he would jump so quickly at an offer from a developmental league that plans to rent out MLS stadiums and whose season runs just seven weeks long.

The length and financial details of the contract have yet to be disclosed but many believe it will be the most expensive deal to date for the UFL franchise. When asked to give a general price range of the contract, Favre’s agent James “Bus” Cook responded, “It’s really a ton of money and since we are in a financial crisis right now it would be a pretty awful thing for me to say out loud just how many tens of millions of dollars they’re throwing at us.”

Favre is not the only big name NFL star the young football league has attracted thus far. In August of 2008, SI.com’s Peter King reported that UFL commissioner Michael Huyghue was courting disgraced former quarterback Michael Vick as a possible sign-on. Huyghue said, “Michael’s not going to be able to walk right back into the NFL. He’s going to need some kind of buffer before he signs in the NFL, and we’ll be able to provide that for him.” When asked if the term “NFL buffer” reflected his general position toward the league, Huyghue responded, “I know we’re not going to compete on the exact same level as the NFL. But I do believe we can win over some big name players, just like Olympiacos picked up Childress, you know what I mean? Flash some cash, some ladies. Show them pictures of Orlando. It’s not Greece, but fuck, it it’s close.”

Favre cited the upcoming UFL draft as one of the biggest draws to switching leagues. “Ever since I was drafted by Atlanta in ’91, I’ve thought, man, I’m better than the second round. This new draft gives me the opportunity to prove all my critics wrong.” Favre went on to later say, “Besides, I retired twice. Why the hell can’t I do the draft again?”

Among the four current teams set to compete during the UFL’s experimental premier season, one team in particular has been especially vocal in pursuing Favre. Chip Wallaumbergh, coach of the Hartford franchise, has left countless messages on Favre’s answering machine and Facebook wall, inviting the NFL legend to various social engagements in order to discuss the 2009 season. “I’m confident he’ll be in a Hartford uniform next fall,” Wallaumbergh said during a phone interview. “It’s pretty frickin’ cold here and I know Brett is in to that. Plus, we don’t have a team name yet and it’s the fans who decide. If it just so happens to be the Hartford Favres I think he’ll have a tough time turning down that offer.” Wallaumbergh is still waiting for a reply from Favre to his invitation to attend next week’s Hartford Wolf Pack hockey game.

For more information on the United Football League and its inaugural season, go to www.ufl-football.com. Do not confuse this address with www.ufl.com, in which case you’ll be guided to a completely different and much more legitimate football program.