MLB Takes Its Fans For Fools

A pair of insulting new ads makes baseball seem a little more storied than it is. 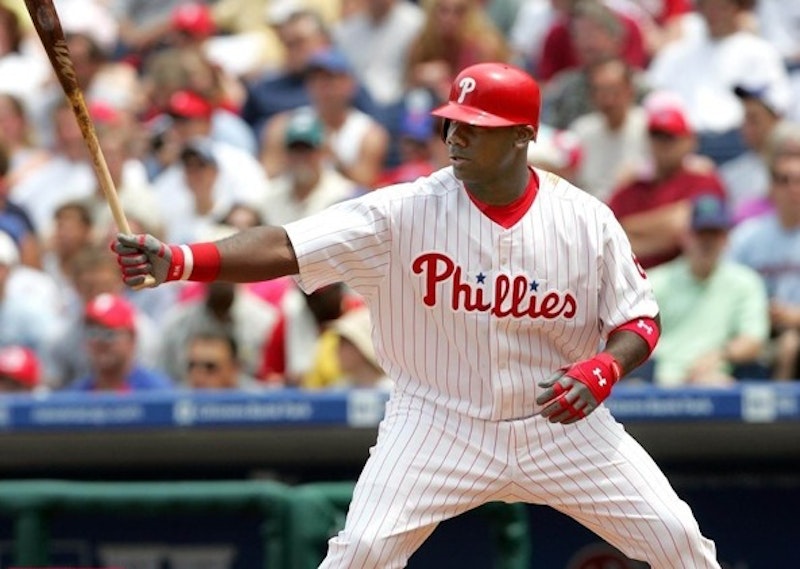 No one dares accuse Bud Selig and his yes-men of running a classy operation, and as the 2009 season progresses into its second month, there’s one glaring example of lousy taste that really sticks in my craw. If you follow games on ESPN, Fox, TBS, MLB.com or any number of local broadcasts, there’s a ubiquitous television commercial, a branding spot for MLB, alternately featuring Ryan Howard and Tim Lincecum, that flirts with vulgarity. The advertisement featuring the Phillies’ slugger is the worst: it opens with a pictorial tribute to his parents’ involvement in the civil rights movement in the early 1960s, and goes on to say how this has shaped Howard, so much so that it resulted in his lifting the World Series trophy last fall. “This is beyond baseball,” is the tagline, and if you can figure out the connection between the men and women who died or risked their lives during that pivotal turning point in American society and the game of baseball, your imagination belongs in the Smithsonian.

Not quite as appalling is the Lincecum spot, in which we learn that the ace Giants’ pitcher was, under his father’s tutelage, a ferociously devoted ballplayer from the time he was wearing short pants to his storied present career. I like watching Lincecum pitch a lot, but how in the world is the history of his training regimen “beyond dedication” and “beyond baseball”? It’s not, of course, and that’s the disconnect between Selig, who at least tacitly approved (and could’ve kiboshed) the spots by McCann-Erickson and the public at large. Howard and Lincecum are gifted athletes, but they’re not heroes; rather, they’re wealthy entertainers, and the idea that MLB is trying to sell the sport by pretending that baseball is somehow a noble vocation—on the level of civil rights advocates, no less—leaves this fan just shaking his head in disgust.

McCann-Erickson’s Pete Jones, in standard ad-speak, or doubletalk, depending upon how charitable you feel, said, “Baseball is special. There’s so much about this game that transcends beyond the field. Whether you’re in the lineup or a fan watching, the game has an ability to connect you in a way that does not appear in a box score.” That pitch, to recall another annoying advertisement, is priceless.

However, this unforgivable lapse of manners notwithstanding, I’m pleased to resume the six-month routine of the season, following the unexpected implosion of the Boston Red Sox’s staring rotation—maybe Josh Beckett will never become a year-in, year-out ace after all—and marveling that the Toronto Blue Jays can win so many games with half of its roster on the disabled list. After all these years, it still amazes me how the results of a game can, at least temporarily, alter one’s mood. Watching the Bosox play, for example, is usually a grueling process, especially when they grind out four-hour contests against the Yanks, and if the team loses I’ll be in a foul, grumbling state. Fortunately, at least for my family, this condition seldom lasts for more than 30 minutes—and conversely, when they win, the excitement is short-lived—and then it’s back to reality.

When my wife, two teenaged sons and I go to Baltimore’s Camden Yards for a Sunday afternoon game, it’s a swell occasion, but the dynamics are somewhat different than if I’m in attendance with a buddy who shares a long history of the sport. As sure as David Ortiz can be counted upon to whiff with the bases loaded these days—this Sox icon’s precipitous decline is sad to watch, as his nickname has changed from Big Papi to Big Popout—my 16-year-old, after he’s had his fill of overpriced stadium grub, will nudge me around the third inning and wonder whether we can skedaddle. “Let’s beat the traffic, Dad,” he jokes, as if the roads are mobbed in Baltimore on a weekend. My wife and younger son are paying attention to the action on the field, and while making cracks with them, say about the ineptitude of Felix Pie or O’s manager Dave Trembley trying to conjure up the hijinks of Earl Weaver when disputing an umpire’s call, I try to keep our oldest engaged in conversation.

Two weeks ago, on the rare occasion that the Orioles won a game, this time with a dramatic homer from budding superstar Adam Jones, Nick and I traded rock ‘n’ roll chatter. I asked what live show, from any period, would be number one on a time-travel wish list. As it turned out, we came up with the same selection: one of Bob Dylan’s ’66 concerts on his tour with the Hawks, the electric portion that opened every night with the explosive “Tell Me, Momma.” The singer’s still-mysterious motorcycle accident in August of that year—which I think was a convenient way to leave the spotlight and thus not lose his mind, or life—finished that tour and he didn’t go the road again until 1974, a somewhat unsatisfying return, at least when I saw him in New York. After that, the generational divide took over, as Nick talked about seeing Nirvana pre-Nevermind or very early Animal Collective, and I mentioned how incredible it would be to see Otis Redding before his untimely death or maybe Stevie Winwood when he sang in the Spencer Davis Group before turning 20.

Turning to economics, one of the most pressing question MLB faces in 2009 is whether the sport is recession-proof or not. ESPN.com’s Jayson Stark, last Thursday, ran the stats on April attendance this year compared to last, and found that, discounting the Yankees and Mets, that on average just 287 fewer people went to games this year. I doubt that’ll continue, but it’s not so surprising: one, when the season starts, baseball fans, weather permitting, are eager to get back to the ballpark; two, a lot of franchises have lowered prices and have upped the number of stretch-the-dollar promotions. Let’s see where the year-to-year figures are in July, after half the teams are out of contention and fans are content to watch on the tube rather than live.

The New York Times, a company that has its own daunting economic difficulties, took a swipe at both of that city’s teams in an editorial on Sunday, correctly scolding billionaire mayor Michael Bloomberg for allowing the grand new stadiums built by the Yanks and Mets to be partially taxpayer-funded. And, like so many others, this particular editorialist delighted in noting the number of empty $2500 “teak-trimmed” seats, while offering this advice: “New York has a lesson to learn from Toronto, where the Blue Jays are already offering ‘Messing With Recession’ games with tickets as low as $5 and hot dogs for $1.”
Never mind that, according to Stark, the Jays averaged 6468 fewer fans this April than last, even with those dollar dogs. After all, it’s anti-Yankees dig that counts for most of us.