Find This Man a Job

The print-media scramble has robbed some of the best young sports journalists of their positions. 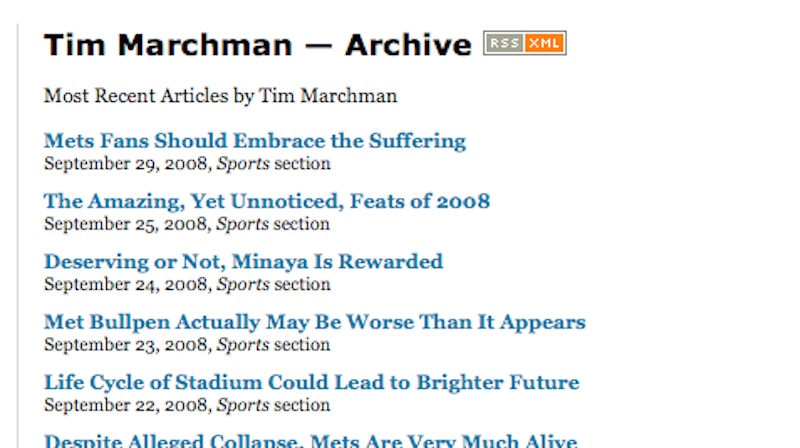 Broadly speaking, the decimation of the print newspaper (and magazine) industry doesn’t really bother me anymore. Like many adults who learned to read by opening up the comics or entertainment section of the hometown daily, today’s turmoil isn’t what I imagined or desired several years ago, but I’ve adjusted and moved on. Do I care, for example, if Newsweek’s political hack Howard Fineman is wondering if his home base (and catalyst for his ubiquitous television appearances) is about to go the way of Look and Life? No. Nevertheless, just as Fineman no doubt has family, friends and perhaps even admirers who are justifiably concerned about his future, I’m saddened by the departure of many journalists—onetime vibrant Masters of the Keyboard turned overnight into Old Man Grumpuses—whom I’m acquainted with.

One fellow, a friendly rival at my college newspaper, is an editor at one of the country’s most troubled dailies, and, at 53, who knows what his next career move might be. Public relations hound or the spokesman for a politician? Nah, not his style. This is a guy who entered the profession right after graduation more than 30 years ago, played by the elite media rules, which meant covering zoning disputes and robberies for a smaller paper (a farm team or “feeder”), quickly moved up the ranks to a prestigious newspaper, enjoyed a three-year stint as a Mideast correspondent in the 1980s, and then, brimming with bona fides, settled into the comfy (although taxing) job as a metro editor.

Likewise, when The New York Sun, a great newspaper, folded last September, my favorite baseball writer, Tim Marchman—who absolutely creamed his competition at The New York Times, although he’s far too polite to say so—was left to scrounge up assignments here and there. He’s written for Slate, Sports Illustrated’s website and The Wall Street Journal—not shabby at all—and though it’d be presumptuous to start a Save Tim Marchman fund, for he’s a resourceful guy, I mostly miss the certainty of knowing where and when to find his uncommonly literate essays about my favorite sport.

The Journal’s recent addition of one sports page has afforded Marchman at least a semi-regular outlet, and his effort of April 16, “Tall Catchers, Managers in Uniform, Pitchers Batting 9th, and Other Bad Ideas in Baseball,” was, as usual, an article that left me thinking long after I’d finished reading. (The same can’t be said, and never was, about 99 percent of baseball beat writers, and I’m specifically thinking of the entire sports department at The New York Post, ludicrously promoted by that paper’s publicists—if they still have any such flacks—as “the best in town.)

As usual, there was plenty to chew over in Marchman’s fine piece. I’m in complete agreement with him that the all-too-common crutch of a team using its closer to finish a game in which they’re leading by three runs (the maximum allowed to qualify for a “save,” a stat that was somewhat arcane a generation ago, back when starting pitchers often went the distance, win or lose), is a waste of resources. Marchman scolds Yankees manager Joe Girardi for summoning Mariano Rivera to “save” an April 10 game in which the Yanks were leading 4-1. Every contending team is stocked with more than one premier reliever, so why wear out Rivera’s arm? Similarly, last night, Boston’s manager Terry Francona had his closer Jonathan Papelbon mop up a game against the Twins, even though the Sox were leading 7-3. Ostensibly, this was to give Rivera’s heir as the top reliever in baseball “some work,” as the NESN announcers said, since he hadn’t appeared since last Saturday.

On the other hand, I part company with Marchman on the subject of a manager’s attire. Long ago, it wasn’t uncommon to see the skipper outfitted in a suit—Philadelphia’s Connie Mack is the most iconic of that breed—but that style went the way of the men’s hat industry. Now, my view on this is a bit screwy, mostly because it drives me nuts that today each team has about half a dozen different uniforms—Friday night tops, Sunday home dress, different logos depending upon whether a team is on the road or home, and so on. The Sox, again last night against the Twins, wore shamrocks on their sleeves and green lettering; catcher Jason Varitek even had a green chest protector. What, is Boston an Irish town that’s also home to the Celtics?

That said, I really think it’d be swell to see managers in Sunday church threads, making their way to the mound with a tie blown by the wind. The Cardinals’ Tony LaRussa would, guaranteed, be dressed like a mafia thug; Tampa Bay’s Joe Maddon might warm to the idea and sport a boater; old-schooler Jim Leyland of the Tigers would, it says here, set the pace for sartorial dominance, perhaps with a three-piece blue pinstripe suit, marred only by a few stray ashes of his last cigarette. Francona, no clotheshorse, is the logical candidate for the American League’s schlub award, but at least he’d be good-natured about it.

I must scoot—still haven’t read Rob Neyer’s blog on ESPN.com (he’s by far the best they have, with his combo of odd links, chats with readers and any number of pop culture diversions)—but two more quibbles this lifelong fan has with modern baseball. One: too much damn bling—and, belying my age, I still cringe upon typing that word. I’ve kvetched about this before, but if it’s distracting to me as a television viewer seeing the Angels’ Jered Weaver’s dangling jewelry, for example, what does the batter make of it? Actually, he probably doesn’t give it a second thought, since he’s inevitably got his own Tiffany’s showcase around his neck.

Two: the abundance of sabermetrics is fine by me—you either pay attention or don’t—but I don’t at all like play-by-play announcers wasting time by citing very obscure facts that are handed to them by researching gofers. A hypothetical: It’s near the end of a game, and one of the co-telecasters says, “George, do you realize that until today you’d have to go back to 1952 when a player tripled, doubled, and then hit into two double plays?” “Incredible,” says his partner, and then segues into an on-air advertisement for a bank (okay, that’s more rare this season) or fast-food chain.

Oh, and finally, I’m really tired of players pointing skyward to whatever god they worship upon swiping a bag or even just beating out an infield chopper. David Ortiz, I believe, popularized this motion, but that was when he blasted a homer, and it’s been explained that his signal is a nod to his deceased mother up in the sky. But when the O’s Luke Scott—granted, a devout Christian—thanks the Lord in postgame interviews (and he’s not alone by any means), I start talking to myself.