A Red Sox fan living in Manhattan battles his way into the new stadium. 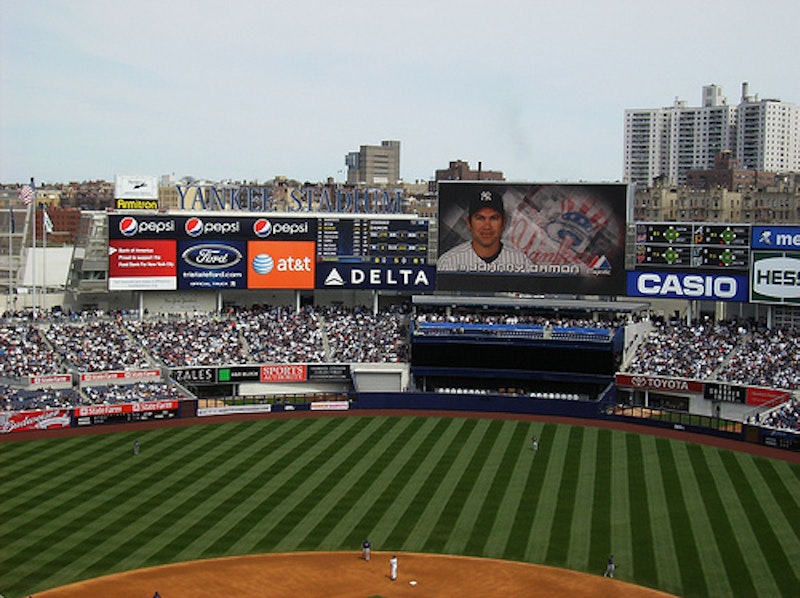 It’s not breaking news that sports can create a bridge between men and women of divergent backgrounds, lifestyles, professions and political beliefs, but I still like to be reminded of that fact now and again. As a young man starting out in business—in my case, owning and editing a weekly newspaper—I learned that if you had even a rudimentary knowledge of baseball or football it was a well of small talk to draw upon in communicating with potential clients. Likewise, talking about the game from the night before often broke the ice in bars, cabs or even with scowling IRS officials who came knocking on your door.

Happily, a common devotion to baseball usually trumps politics. This was particularly true when I lived in Manhattan for some 16 years, where, as an economic conservative, it wasn’t prudent to crack jokes about Bill Clinton’s unapologetic hypocrisy—my favorite howler was the then-President’s mantra about his devotion to those Americans who “played by the rules”—unless I really wanted to piss somebody off. One of my best friends in the city, a Tribeca neighbor whose kids are the same age as mine, are polar opposites on the political spectrum (he thinks Barack Obama is a Republican in disguise, so you get the drift) but as fellow longtime Red Sox fans who shared childhood memories of the 1967 “Impossible Dream” season and Tony Conigliaro’s tragic beaning, we have plenty to talk about.

Even after we moved to Baltimore several years ago, Dan and I would keep in touch by email, and during the baseball season usually several times a day. Pre-2004 Sox fans of a certain age are fatalists and the team’s recent success hasn’t changed that one iota; anyone who witnessed the horror of the ’86 World Series took every Sox misfortune after that year in stride. So, this year Dan and I moan and groan about GM Theo Epstein’s cautious dealings in the off-season, not picking up a slugger to replace the punch of David Ortiz or finding a catcher to supplant the girly-swinging Jason Varitek, and even when the team wins there are quibbles galore.

I’ve yet to visit the Yankees’ new “cathedral,” but of course have relished the difficulties encountered by the Steinbrenner Bros. not only on the field but with the unexpected—at least by them—rumpus from their fans about the exorbitant prices for the privilege of watching Derek Jeter not quite reaching a grounder hit to the left of him. The kids and I will get up there some time this summer, but in the meantime, Dan gave me a rundown on his experience at the Stadium, last Tuesday night when the Sox won their fifth str aight over the Yanks this season. Here’s what he wrote:

Was at the House That Greed Built last night. First, checking the Yankees website, I learn that small bags and backpacks are permitted. I throw a newspaper, sweater, small bottle of water, glasses, and asthma meds into paper-thin mini-backpack that, when empty, rolls up into something slightly thicker than wet paper towel and can fit in your jacket pocket.  Get to the gate, and one of Herr Steinbrenner's jackbooted minions tells me I can’t bring the bag in. I say the website says I can. He says look at the sign, pointing to about 100 rules in script no middle-aged man can read without glasses. I say I'll take everything out of the bag, chuck the paper, put the rest in my pockets, including bag. He says that’s no good. People behind me, Sox and Yank fans, agree it’s ridiculous, since the bag is empty and can fit in my pocket, so what’s the problem? The attendant says sorry, but nothing doing. I say I was planning on filling bag with $500 worth of valuable and classic, historic Yankee memorabilia for kids at home. He says I can go down the block and across the street, check my rolled up paper towel at the bowling alley. I ask to speak to a manager. He says he is the manager. I say I have to meet my son, who, of course, despite my reminding him 20 times, forgot his phone, so I need to be nearby to hook up with him, and can’t go to the bowling dump. He says tough. I pay him polite respects, walk to next gate, take off my Sox hat, fold up paper towel/huge backpack, stick it in my pocket, and walk through the gate with no problem. Get to seats (the Jim Beam Suite, though not a suite at all, just rain-soaked seats), find my son there with 60 pounds of dynamite, er, schoolbooks and dirty clothes. I ask how he got that backpack in. He says they asked what was in the bag: Osama bin Rosenthal says books (Koran?), and they wave him through. Would the result have been different if they'd seen Sox shirt under his jacket? Think I smell class action discrimination suit. Once inside Der Stade, great to see the timeless traditions endure: Yanks fans booing Joba (in first inning, after that he was Cy Young); cursing Teix (more music to my ears); calling for Girardi's head, yelling to bring St. Joe back, the (now half-hearted) "Boston sucks" chants; the $11 beers ($16 if you want it in the "commemorative" Yankee cup); the nonstop hagiography, albeit now in monumental Albert Speer-like setting. Not to mention the hallowed fan favorites that baseball purists adore: Cotton-Eyed Joe, the race of the subway cars, the relentless entreaties to make noise, cheer, clap, fart, breathe, the constant camera panning to preening fans, etc. Truly a true fan's delight. And, of course, a ballgame was in there somewhere. Will take 5-0 vs. Yanks anytime, but lineup w Bailey, Van Every, Green (though better than Lugo, at least on offense, to be sure), Tek, Popup and Beckett of the 7.40 ERA not exactly awe-inspiring. Still, the old hostility, tension, edge between them and us just isn’t there anymore. Yanks fans seem beaten down, defeated. Not that the Sox are much better, but still something to enjoy for now.

Now that’s a game re-cap that far surpasses any I read the following day, proving that “citizen journalism,” even in private form, isn’t all bad, The Huffington Post notwithstanding.