The 40 Year Old Virgin of the NBA

Because Glen "Big Baby" Davis gives us all hope. 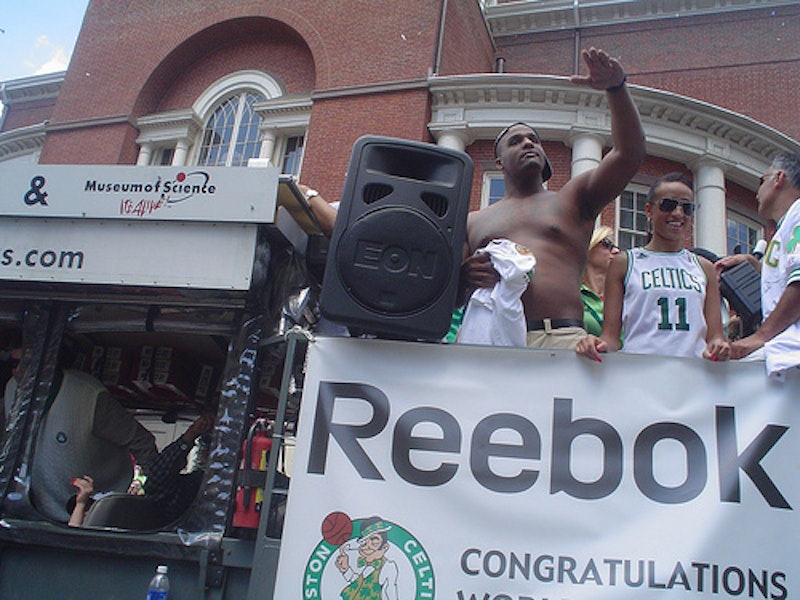 I may not be completely qualified to write about basketball. I played Catholic league at seven and am the only person that I know that’s never scored a basket playing competitive hoops. But I do know that Big Baby Glen Davis will single-handedly redefine the role of the fat man in sports as we know it.

I unabashedly love Kevin Garnett. He’s inspired me to become a bandwagon Celtics fan. He plays with unparalleled intensity and is more athletic than any seven-footer to ever hit the parquet floor. Garnett combines athletic, hardcore, badass, and intense into one word. He basically ran too hard and fractured his head’s tibia and fibula, and Baby now plays instead of him.

Baby earned his nickname because he has a young looking face and a doughy body type. He couldn’t post up on my grandmother and shoots a 15-foot jumper like one of those eighth grade girls on the Texas Christian team that lost 100 to nothing. Nothing.

Shaq is fairly fat also, but dominatingly so. He ran Yao Ming over for six years or so, and pretty much every other big man for the duration of his career. He leveraged his mass into pure power.

Babe Ruth pioneered this sort of leveraging. He threw his fat behind him while he pitched for the Red Sox. No one could touch him. He launched his mass behind every swing to smash 714 home runs. He drank barrels of whisky and smoked cigars two at a time and ate hot dogs instead of protein bars. The Babe made fatness tough. Shaq embraced this persona. So did David Wells.

Wells tossed a perfect game following a Ruthian bender and said so in his autobiography. I wouldn’t call Wells an athlete any more than Ruth, Shaq or Big Baby, but he took his handle bar mustache and gut and made it tough as shit. Tough to the point where in one game not a single Minnesota Twin could touch the ball.

I seriously doubt if Boomer or the Babe ever cried. Garnett only cried once, and I think it was an accident. See Chuck Norris. See Patrick Swayze (circa Point Break).

Baby’s redefinition of the big man isn’t glorious. It’s not epically athletic like Garnett or tragically heroic like Ruth. His success is despite his persona, which is why I love him. Baby never hits the clutch shot, and the point guard on his own team boxes him out on rebounds when times get tough. No one trusts him, and Baby is void of allure. He doesn’t have the swagger of a drinker and breathes too easily to get pegged as a smoker. He averages the softest 20 points per game in the history of NBA big men and can only snag a board when there isn’t anyone around.

Baby’s limited success seems due to the fact that every player around him feels sorry for him and gets out of his way when it matters the least. After Garnett went down, Baby played so pitifully that Garnett had to yell at him and Baby cried. He bawled like a three-year-old who fell down on a rough porch and lodged a bunch of splinters in his leg. Baby looked physically hurt and demoralized by Garnett, and rightfully so.

Now, I don’t really have a problem with Baby’s empty stats. I guess other Celts would pick up more of his slack but given his averages, Baby stands to make $6-$8 million a year next time is contract his up. This example of the economics of professional basketball speaks to a larger societal norm that pervades society.

Fat people can succeed, athletically and otherwise. I know a bunch of fat lawyers who are great at what they do, but what Baby’s potential (and inflated value) proves is that even the slightest, softest, emptiest performances are championed. Baby is the NBA’s version of a sub-prime mortgage. Overvalued, packaged up with a bunch of other worthless pieces of crap, and sold to dumb investors.

Baby’s example, and all of the other not-so-fat mediocre performers out there, shows that we haven’t been forced to exceed our limitations and leverage them into something better than they what they actually are worth.

Garnett represents the freak of nature, something that shouldn’t be that is. The Babe and Boomer to a lesser extent succeeded at a spectacularly high level because of their faults to spite those grinding, athletic dudes around them. Baby reached his mediocrity despite himself.

Not out of fear or sheer will. It just kind of happened, and I love him for it. I love the fact that by no effort of his own and based purely on the pity of everyone around him, Big Baby Glen Davis will become a multimillionaire. He is the “40 Year Old Virgin” of the NBA.

Baby gives hope to the skinny white boy who never sunk a regulation basket. The hope that maybe one day, if I could look pathetic enough that some large athletic man will get out of my way, set up a ladder in front of the hoop, and let me throw down a charity dunk.