Meet Me at the Bullfight

The sporting ritual of matador vs. bull, long a cultural staple in Spain and Mexico, is slowly fading to the annals of history. 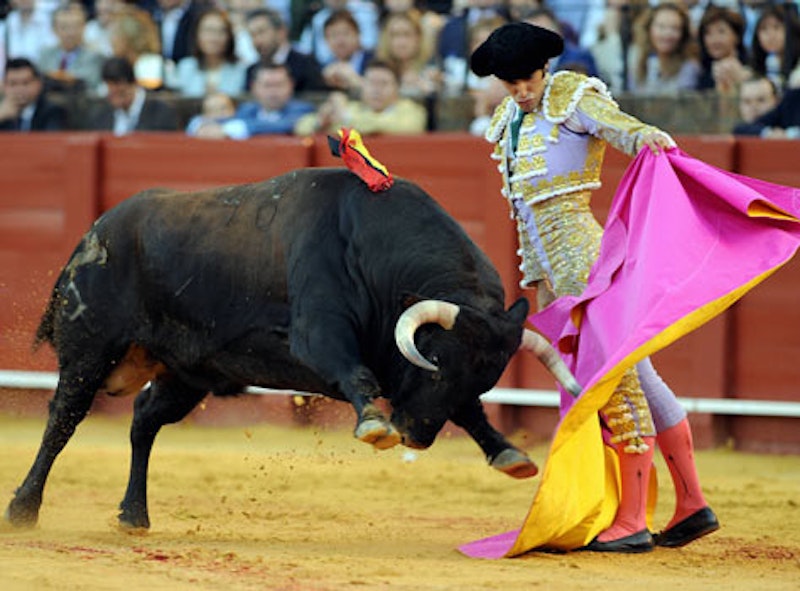 There were far, far more important stories in the diligent media last week—leaked details of Chelsea Clinton’s rehearsal dinner menu, the revelation that Matt LeBlanc dyed his hair during his years on the ridiculous sitcom Friends, the Charlie Rangel/Maxine Waters Corruption Revue and ornery Roy Oswalt getting lit up in his first start for the Phillies—but for a provincial snoot like myself, nothing came close to the disturbing news that politicians in Spain’s Catalonia region voted to ban bullfighting, effective in 2012. According to a story in The New York Times, this edict was intertwined with separatist groups attempting to break off Catalonia from the rest of Spain, and the sop to animal rights do-gooders was largely a tactic to gather votes. A score, finally, for the shell of a group known as PETA. So the grand and noble sport, and art, of bullfighting is cast aside to accommodate more “dignified” measures like having 50 percent of foreign films dubbed or subtitled in Catalan.

I’ll leave the implications of the mess in Spain to writers at The Economist—although should Catalonia eventually achieve a large degree of independence it can’t augur well for that country’s already-in-the-toilet economy—and simply express my dismay from afar that bullrings in Barcelona will be shuttered, no doubt razed for Climate Change reeducation centers, ending the grand fiestas centered around the chess match between a matador and bull. (Fine, it’s sort of rigged, but the bull wins once in awhile.) One despairs that this might become a trend—will Madrid and Mexico City follow suit in the next couple of years? It’s a victory for those who believe that anything that occurs between man and animal is “barbaric,” a supposedly enlightened view that really just means there’s a little less fun and camaraderie in the world.

I love going to bullfights, as well as baseball games, horse races, boxing matches and casinos. A paramount disappointment in several trips to Bangkok is that I never could find the right guy who’d give me the password to attend an illegal cockfight. (In 1987, in battle-torn Manila, I also had no luck on that front.) That’s a minority view, at least in the United States, but it’s part of an unknown culture and raised my curiosity. Similarly, it’s not likely I’ll ever tag along on a fox hunt in England, one, because I wouldn’t qualify as a British patrician with ancestors descended from Oliver Cromwell, and two, the woebegone Prince Charles and like-minded subjects in that country have put a whammy on the longtime tradition.

Sorry, but I don’t feel bad for the bull who’s inevitably gored at the end of a fight, and anyone who eats a ham or roast beef sandwich yet screams “animal rights” when it comes to bulls isn’t reading from a kosher rulebook. I’ve been to about a dozen bullfights, and aside from one long afternoon/early evening at Madrid’s world-renowned Plaza de Toros de Las Ventas, when sitting in the third row and seeing the bloody ear of a bull presented to a Spanish royal was a touch gruesome, it’s been a marvelous way to pass some time and soak up the pageantry that surrounds the events.

About 10 years ago, while vacationing in Puerto Vallarta for a week or so, I took my then pre-teen sons to a bullfight in a picturesque, if relatively small, ring on the outskirts of town. My wife was a good sport and though passing on the outing and quietly apprehensive about the potential for “night frights” haunting the boys, she didn’t raise a rumpus, and when we returned, all three of us a bit sunburned but exhilarated from the action, she simply said to me, “Good, I’m glad that’s out of your system for this year.” I made sure we had nosebleed seats, so it didn’t get too gory for the kids, but they were fascinated not only by the four matches and bursts of color that seemed like silent fireworks, but also the vendors hawking posters depicting that day’s star matador and the bottles of Coke that must’ve been recycled from 1959. At least that’s what it seemed like: I’d told them about the standard Coca Cola of my youth, those 6.5 ounces of soda in the thick green glass bottles, and their eyes widened upon seeing the real thing.

Still on the modern sensitivity beat, do you even know who the world’s heavyweight boxing champ is today? I don’t. (So it’s 30-year-old Brit David Haye, as I just found out. Never heard of the guy.) This sport has been in the crosshairs of busybodies for decades now, and while I understand the serious injuries that these extraordinary athletes can suffer, especially when their brains are scrambled after too many blows to the head, no one forced them to pursue that line of work. My first brush with the crusade against prize fighting was in the early 60s when Davey Moore was killed in the ring at Dodger Stadium, giving Bob Dylan prime current material to write about, and stirringly in his “Who Killed Davey Moore?” I’ve no idea whether this is true or not, but 100 smackers says that Dylan (who later lionized boxer Hurricane Carter in an explosive song that nonetheless butchered the facts) was certain, like millions in the United States, to make any Cassius Clay/Muhammad Ali view championship fight appointment viewing. Could be wrong, but I don’t think there’s the same enthusiasm for boxing today; maybe it was Mike Tyson and Leon Spinks who spoiled the sport. But when Ali was in the ring—before he was suspended for refusing to fight in Vietnam—it was an event as highly anticipated as the Super Bowl. I’d often watch Ali dispatch the likes of Floyd Patterson, Ernie Terrell, Henry Carter and George Chuvalo at the home of my Italian friends Frankie and Tony, whose father was a wealthy developer, on their big (for the time) RCA color tv. In the mid-60s, the sports world at didn’t have anyone to compare with Ali, although perhaps Sandy Koufax (the exact opposite of Ali in demeanor), Joe Namath and Wilt Chamberlain weren’t far behind.

Bullfighting, fox hunts and boxing will inevitably go the way of the printed newspaper, as fans die off and aren’t replaced by kids who’ve never heard of Sonny Liston, let alone Joe Louis and Jack Dempsey. In fact, a lifelong pal of mine, who has about as much in common with animal activists as he does with Harry Reid, has jumped the fence on this question. He emailed the other day: “As a kid of 16 at a bullfight in Mexico City the apparent risk for the matador and pageantry of the show was thrilling. What I don’t like today, many decades later, is the slaying of the bull in front of a raucous crowd, slaking their thirst for death. I feel the same way about the hunting for all types of wildlife. It reminds me that we live in a dangerous, unkind world, and I have no desire to be around it when it’s happening. How about Capture the Flag or Dodgeball as demonstration sports for the next Olympics?”

My friend’s joke about dodgeball, which is slammed by Boomer parents in most parts of the country as excessively violent and too competitive, is evidence that he hasn’t slipped into unfortunate political territory. I was a bit surprised at his ambivalence about bullfighting, but I guess that’s indicative of why attendance is slipping even in cities where the ancient ritual is still allowed. And he makes some valid points, but I’m just not buying. The killing of a bull doesn’t raise my pulse, but put smack in the middle of a delirious crowd, ebullient and friendly, it’s a lively and exuberant few hours that I’m glad to be part of.