It's Always Raining at the Orioles' Camden Yards

Baltimore's baseball team is so wretched, that it'll take a complete turnover of management to reach even a .500 record three years from now. 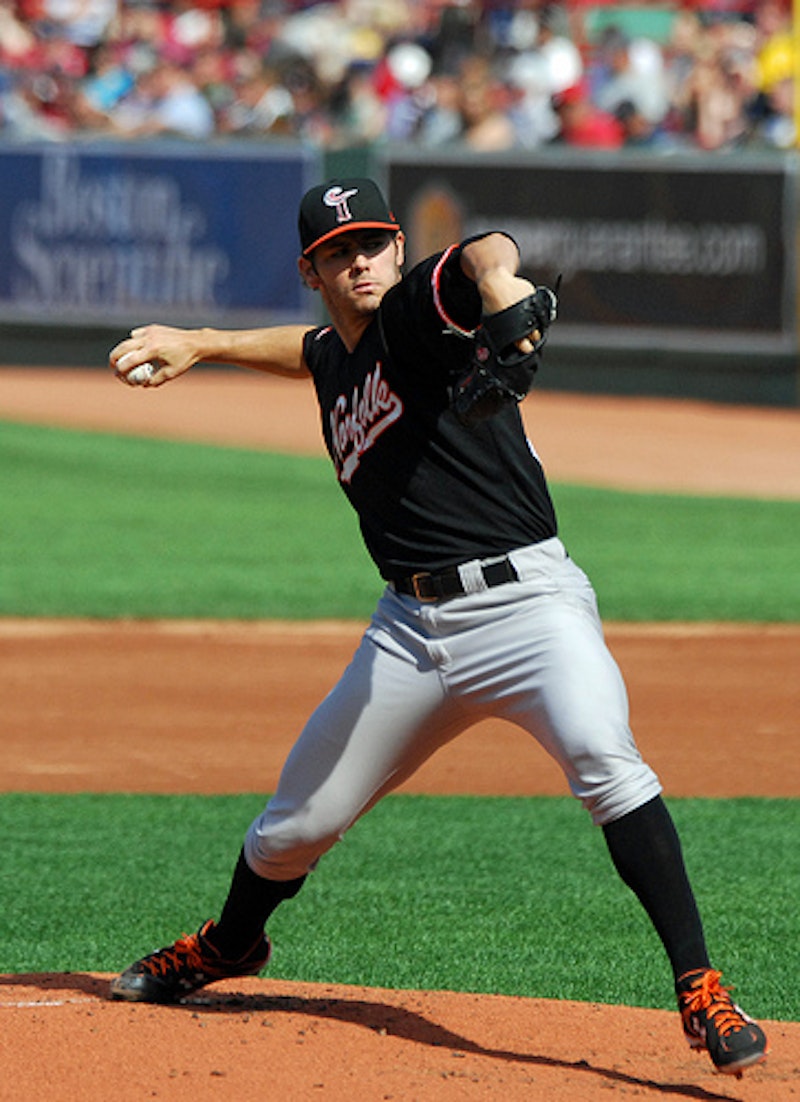 It was nearing the end of another Orioles loss at Camden Yards yesterday—this time a 10-4 thrashing by the Minnesota Twins—when I heard a patient father sitting behind me with his pre-teen son, both wearing O’s caps, explaining the rudiments of baseball. I didn’t have the nerve, or desire to interrupt the tutorial, to suggest that perhaps this fellow ought to be down in the Orioles’ dugout where his advice was clearly more necessary. Anyway, I especially liked this snippet: the Twins were up in the 7th inning, just before a thunderstorm whipped through the park, and the young boy was anxiously awaiting—God knows why—the ritual broadcast of the very late John Denver’s horrific “Thank God I’m a Country Boy.” The father, who was scoring the game, explained, “It’ll come soon, Joey. Once Minnesota is finished doing battle in this inning, it’ll be time for the 7th inning stretch.”

It was a lovely minute or two of civility, and though I’m lucky enough not to be an Orioles fan it was still reassuring that some of the dwindling masses that attend home games in Baltimore aren’t completely downtrodden. As noted many times previously, I’m a Red Sox fan, as is my 15-year-old son Booker, but in the summer going to a Sunday afternoon ballgame, no matter who’s playing, is an incalculable pleasure, one that I miss sorely during the winter. Besides, my wife, who used to read books when we watched games at Yankee Stadium during the 90s, has a soft spot for the O’s, and grimaces when the other team scores a ton of runs, which happens nearly every time we park ourselves in Section 246.

In the July 26 Baltimore Sun, O’s beat writer Dan Connolly (who may take solace that the Orioles are in as bad shape as his newspaper) threw in the obligatory fact of how many people attended, using the euphemism “announced crowd” in front of the number 17, 408. I’m a fairly decent head-counter, so I’d lop off at least 7000 as people who for whatever reason bought season tickets but didn’t make it to the park. There was one malcontent, however, leaning over us from the outside portion of a luxury box, who made his feelings known several times. Out of nowhere, in the early innings, I saw this guy, not visibly intoxicated, yelling, “Can’t you run all the way to first base, you bastard Corey Patterson,” so vehemently that his face turned red and veins were bulging from his neck. There’s no connection, I think, but the next time Patterson was introduced at the plate, maybe 10 people clapped their hands. And, to be fair, Patterson is having a decent season, at least by the low bar set by the rest of his teammates. I mean, the Twins’ Jason Kubel—Jason Kubel!—was the recipient, in comparison, to a thunderous welcome when he settled in, and unlike when the Sox or Yanks take over Camden Yards, there was scant evidence of a large Minnesota contingent.

The Orioles desperately need a new manager but even a handsome salary is unlikely to entice a proven commodity, since what veteran skipper wants to taint his resume with three losing seasons? As Peter Schmuck noted in his blog, that’s likely the holdup on the speculated Buck Showalter hiring. I’m hardly an expert, just a fan of the game, but it seems that interim manager Juan Samuel is making a huge mistake by pulling his young starters if they give up a number of run in the first four innings. Yesterday, for example, the highly touted (at one time, at least) Jake Arrieta was sent to the showers after giving up five runs in four innings. This makes no sense: if pitchers like Arrieta, Brian Matusz, Chris Tillman or Brad Bergesen are going to reach their potential, it’s better they go deeper into the game, take the knocks, inflate the ERA, but learn more about pitching in the major leagues. Saving the bullpen from exhaustive duty isn’t even key, since the O’ pen really sucks, but the team is heading for a 100-loss season so why not treat the remainder of the schedule as extended spring training?

In the meantime, Orioles GM/President of Operations Andy MacPhail, who came to the team with a record of success and respect from his peers, is squandering that history by his insistence on rebuilding the franchise in a methodical (which is a more polite word than glacial) manner. Once again, in the off-season, the Orioles, who have some dough to spread around, will be shut out from attracting any impact free agents since a star like, say, Jayson Werth, while digging for gold, isn’t so much of a mercenary that he’d sign a multi-year deal with the doormat of the American League.