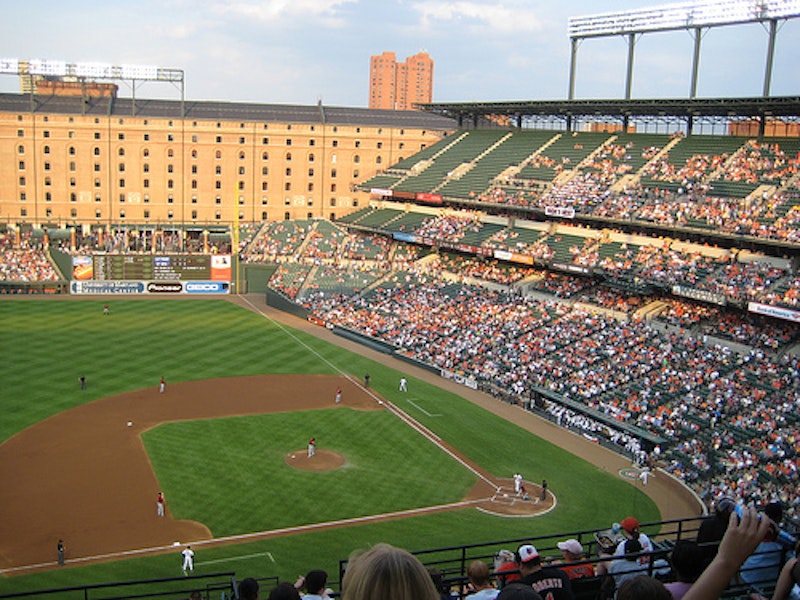 When you root for a sports team, you take on an identity. Things that happened before you were born shape the way you think about, interact with, and follow your team. It’s about where you’re from, who you are, and who your family is. I am a Baltimore Orioles fan. I was born in Baltimore. I was raised with the O’s. My dad, originally from Boston, chose to adopt them when he came here, chose to raise me with them. Without that personal history, without my dad being who he is, then I probably wouldn’t be an Orioles fan. I’d be like my cousin, who—despite growing up in the same place—was always raised Red Sox first. Or maybe I’d be a Phillies fan. My parents could have stayed in Philadelphia, where they lived before moving to Baltimore.

I suppose it would be easier if I’d been lucky enough to have the Red Sox or Phillies, combined winners of three of the last six titles. Instead, I have the O’s. In the 24 years I’ve been alive, the Orioles have had 18 losing seasons. They’ve made the playoffs only twice, once being ousted by an out-of-nowhere sweep and once losing to the hated Yankees after one of the worst officiating calls of all time. Yet, I’ve always been there, always hoped, always cared. No matter what happened, the Orioles were mine. Until this year. This year, as we trot along, on pace for the worst season in our history, I find myself drifting away. The empty seats make me anxious. The 13th consecutive losing season is starting to feel like a turning point. All I want to do is care, but something is stopping me, a defense mechanism of sorts. You see, there is something dark in my sports history. I am haunted by a team I never knew, a sports trauma from before my birth.

Exactly two years before I was born, the Baltimore Colts snuck out of town in the middle of a wintry night. Mayflower moving trucks showed up at their practice facility and, without a word to the mayor or anyone else in the city, transported the team to Indianapolis. Twelve years later, the Ravens returned NFL football to the Baltimore, even winning a Super Bowl in 2000, a happy ending for a city that had a piece of its heart ripped out back in 1984.

But those 12 years produced a gap, a Lost Generation of which I am a part. I was just a little too old by the time the Ravens came to town, and while I love the team, they’ve never felt quite mine. I’ve never quite lived and died with the team, the way I see my younger brothers (the youngest was only four when the Ravens came). Instead, my childhood sports memories are dominated by a single team: the Orioles. Sure, I have a couple memories of watching the Ravens those first couple years and even of going to a game, but by that time I had entered my brief rebellious anti-sports phase. It wasn’t until high school that I really got into the team, and by then, the powerful mystique of sports had already ebbed away, the athletes gone from superhuman legends to mere mortals.

The scenery of my youth, then, comes with Cal Ripken posters (that free, life-sized “got milk?” one that every kid had), Memorial Stadium hot dogs, tears from the’96 playoffs, and the two (!) foul balls I’ve been lucky enough to catch at Camden Yards. The Orioles were the only team there for me when sports were still larger than life. Even during my anti-sports phase, I went, unable to break the tradition of going to the park with my dad. Of course, those are the things I remember most: trying to stay up past bedtime, walking out of the stadium with the game still going strong, the sound of a home run being hit while we were a few blocks away, and the crackle of the last inning on the radio in the parking garage.

I am forever grateful for those memories. The Orioles are the one team that stretches my whole life, the only one that takes me back in time whenever I watch the game. Baseball is stereotypically the nostalgic sport, the old-timers game that connects us to our fathers and grandfathers. Its popularity and well-known records stretch back decades before football or basketball was ever in the mass consciousness. Yet, for me, it is more an accident of history. Had the Colts stayed, they would be mine just as the Orioles are. The Sundays spent watching the Ravens on the couch with my dad and brothers would have been a lifelong routine with the Colts. I would have had a team in Madden on Sega Genesis, just as I had one in Frank Thomas Big Hurt Baseball. Knowing what it was like to have one team, there is still a sting when I think of what could have been.

The Colts are my ghost of Christmas past. In a way, they are my real football team, their absence still shaping my sports attachments, putting the smallest of barriers between the Ravens and me. Above all else, they are the paranoia that has crept into my head with the building Orioles losses.

The losses didn’t used to matter. I used to get excited for our shitty prospects.  I used to watch every game, despite our terrible record. Every loss used to ruin my day, even when I knew the season was over. I even paid a bunch of money to get the MLB package while at college in Michigan; just so I could watch the O’s lose a bunch of meaningless games in September. But this season is different. Our star prospects, the ones that were supposed to portend a bright future, have fizzled. The Yankees look stronger than ever. The Rays have passed us by and look set to contend for a decade. Even Toronto is playing around .500. Our long-term plans seem to have failed, our chances of winning appearing bleaker than I can ever remember.

And the fans are tuning out. This will be our worst-attended season since moving to our stadium in 1992, another downward blip on what’s become a worrying trend recently. Fans turned on owner Peter Angelos years ago—even walking out on a game  in 2006—and the animosity has only gotten stronger. As opposed to some of our previous struggles, fans can now turn to the Washington Nationals, who noticeably lack an owner as loathed as Angelos and have recently dominated local media coverage with the arrival of Stephen Strasburg. The Orioles can’t even rely on a Ripken-like player to boost interest with star wattage. Our lone All Star was also-ran Ty Wigginton (who can’t even spell it “Wiggington” like he should).

It’s been 13 years since we had a winning season. That’s enough to produce a Lost Generation. That’s enough to institutionalize the downward attendance and buzz. And I’m terrified that it’s enough for some attractive market without local competition—maybe Las Vegas or North Carolina—to call. Yes, this is irrational. Yes, there are several other teams in worse attendance shape than we are. Yes, we have a beautiful stadium. But … they’ve done it before. I saw it happen to the Seattle Supersonics just a few years ago, and they didn’t go anywhere nearly as attractive as Vegas or Charlotte (sorry, Oklahoma City). Of course, the last team we lost went off to the middle of Indiana, of all places. But now the ghost of the Colts is whispering in my ear. It’s telling me to tune out. Try to break the bond, so it hurts less when the O’s finally leave.