Dig we must for a greater New York hockey team. 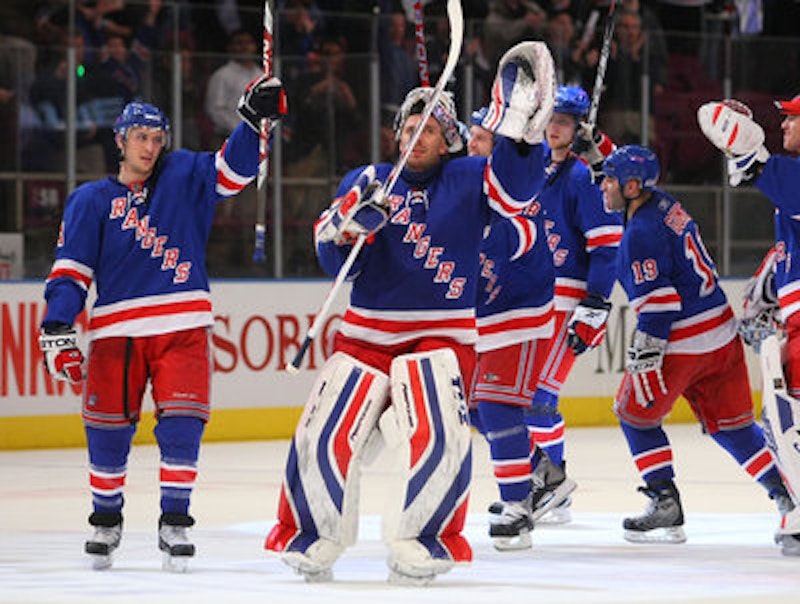 The Brother Jimmy’s BBQ on the southeast corner of 8th Ave. and 31st Street used to be the Penn Bar. Pimps would hang out there during the day wearing hats with feather plumes of brilliant colors. There was neon, shineboxes and payphones. The nervous bartender was an underemployed illustrator from Philly. Directly across 31st St. is Madison Square Garden, and before the recent Game 4 of the Rangers-Penguins Stanley Cup Eastern Conference, the corner was pre-game boozy and mostly white male. Commuters trying to use Penn Station openly commented on the public drunkenness of ticketholders mustering outside the “world’s most famous arena.” Overheard cell phone conversations uniformly had an angry edge as users beelined and marched their way into the station/arena.

The Rangers were down 2-1 in the semifinal series and had been shut out by Pittsburgh in two straight games after the Blueshirts won game one in overtime. Brother Jimmy’s had a chalkboard outside proclaiming the venue as “official playoff headquarters” for Rangers fans. It took all of three minutes for bar space to open up and a $6.50 pint of Bud to slide forth as the MSG and NBCSports pregame shows played simultaneously overhead with Southern rock blaring over the sound system. A glance at the staff’s garb indicates the NHL lawyers must be slacking off with their trademark protections. Brother Jimmy’s shirts had the New York Rangers crest appropriated with the frat joint’s slogan “Put some south in your mouth.” What would Tex Rickard say about that?

Around the corner on 8th Ave., the Blarney Stone has kept its old neon sign but gutted its interior to look like every Fuddrucker’s from Connecticut to South Jersey. Happy white guys sat at the bar with dazed countenances and a few Penguins supporters congregated in the middle of the floor with plenty of elbow room. The Garden escalators were chock-a-block as the teams finished their pre-game skate arounds. Next to the Blarney Stone was Taboo, a dark narrow “clubby” space with a mistake name and a wall of Poland Spring cases being delivered to the deli next door blocking its front. At the corner of 30th St. still stands the Molly Wee, which seemed to always be the pregame stop for Dancing Larry—the bald Rangers fan employed to inspire the groggy MSG crowds with his emphatic arm-pumping dance from the “cheap” seats. No sign of Larry this late into the pre-game. A $6.50 pint of Harp was produced as a gaggle of Asian IT guys talked about encryption. The windows had been thrown open to the cool Manhattan dusk. An ambulance was stuck in traffic, a Rasta dude was trying to sell an office lobby plant to anyone passing by, including a cop. The monitors were showing Pierre McGuire’s awkward interview with Ranger Derek Stephan with both standing motionless on the Garden ice.

Somewhere deep in the rear of Molly Wee’s there was a toast to the return of Chris Kreider and his sore hand, which was sorely missed by the Rangers of late. No one was buying the Rasta plant, and the tech guys parted their sea of nerdiness to welcome a Lori Petty-esque Tank Girl type with pink hair and a Vans trucker hat slightly askew. The brogue-laden bartender kept the techies from completely mobbing the lass and it was time to move on.

A few commercials later and the puck was dropping. The Thirsty Fan back on 31st St. in the middle of the block looms like an airplane hangar. Overstaffed and underattended, a $7 pint of Magner’s helped ease some urgent shouting from some dwarfed guys in Rangers jerseys imploring their team from the bar. The MSG escalators were empty as the usual corporate malingerers were honoring playoff hockey by actually showing up on time. Two minutes into the first period, Evgeni Malkin scored on a sweet backhand spin and the Penguins are off and running again. Suddenly the whole Garden neighborhood was as quiet as the Serengeti Plain at dawn. Wire basket trash can tumbleweeds came to a halt. Even the parking garage flag wavers were stunned. A Kebab House next to The Thirsty Fan, however, was undisturbed. Its flatscreen was showing the Indiana Pacers NBA playoff game in some type of isolated hockey fatwah.

Neighboring the Kebab House is the Church of St. John the Baptist which columnist Dennis Duggan used to write about in Newsday and the Daily News—something about the latest confessional hours in the city, handy for sinning commuters and barflys alike. With the Rangers down 1-0 it was time to see the forgettable façade of the Garden.  On the other side of 31st St. among the TV truck clutter, two guys in suits and one casual Friday guy were negotiating with an actual scalper. They were trying to get him down to $120 a pop because there was only eight minutes left in the first period. At the corner, a sturdy hot dog vendor lady—an Albanian wearing a soiled TruTV cap—served up a $3 frankfurter. “Are the Rangers going to win this?” she was asked. She pointed over my shoulder. “Looks like they’ve already lost one,” she said.

The Garden video screen is showing the game broadcast for all to see on 7th Ave. There’s Martin St. Louis, a Broadway bust, standing and inept at the blue line again. A cop guarding the subway entrance faced front but had his head swiveled to watch the Rangers Game 4 travesty unfold. Newspaper box ruins provided a nice leaning spot for the hot dog dinner, and across the avenue the Hotel Pennsylvania sulked. It was the Statler Hilton on my first ever visit to New York City as a fifth-grader accompanying my dad on his business trip. We saw the Rangers play and Nick Fotiu, a Staten Islander who skated for the Blueshirts, fired souvenir pucks up into the cheap seats after the team warm-up. It was about the coolest thing this 11-year-old had ever seen.

Fotiu would never stop throwing up if he were subjected to watching the Rangers awful power play bungle its way to 36 consecutive scoreless shifts. This was probably the Rangers’ final home game of the season as game five loomed in Pittsburgh, with the Penguins up three games to one. I was visiting a pal in Brooklyn who teaches a sommelier class. He was laughing at a help wanted ad in one of the trades. The New York Yankees were still looking for a sommelier for one of their big-time corporate suites at the new Yankee Stadium. They wanted someone with at least three years of fine dining experience. The pay, as he worked it out on a calculator, ended up being just below minimum wage, proving once again that in the land of the Steinbrenners and the Dolans and the rest of the charming sports franchise owners, you cannot eat beans and burp chicken.