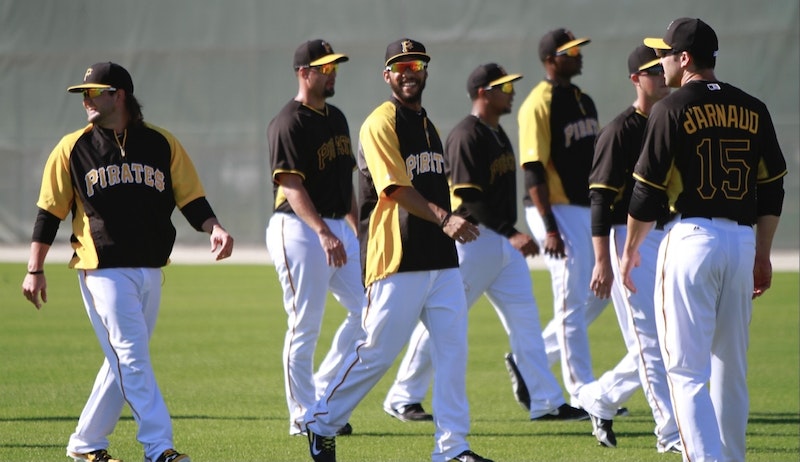 Some 150 years in as one of America’s great inventions, the sport of professional baseball has simply become hard to embrace.

On several fronts, it’s imploding with self-planted squibs, making it the World Trade Center Building 7 of the major sports leagues. It has isolated the younger generation, pissed off its old-school fans and in the case of the recent lock-out negotiations, transformed the present-day narrative into a mind-numbing morass of bickering millionaires. The owners are a cabal of Skull and Bones society hucksters with closed books, no salary cap and no enforcement of their own rules regarding revenue sharing and luxury tax. The new CBA is just another Leisure Class problem for these one-percenters who are being exposed for their audacity with every interaction with the player’s union.

Even a diehard fan like myself had trouble surviving the late-winter Punch-and-Judy show between MLB player’s union rep Tony Clark and the Nathan Thurm-style stooge attorney-turned-commissioner Rob Manfred. I’d much rather remember Clark for the time he hit a home run so high and deep in the Tokyo Dome during a 1990s-era Yankees Opening Day Abroad junket that it struck a Bladerunner-style scoreboard that appeared to be 700 feet from home plate.

As the old game changes with new rules like the Tenth Inning Tragedy that puts a beer league softball runner on second base to start the frame, the “get off my lawn” jokes ensue for all who protest these abominations. These are professional players. The league’s insulting them, and the fans, with claptrap like the automatic runner in extra innings. People who watch baseball, especially through the long-haul of nine innings, aren't interested in shortening the game by 27 seconds by implementing these types of changes, including the banning of defensive shifts next year. Manfred, like every commissioner before him except Fay Vincent, should be embarrassed that they allowed these ideas to survive.

Did you know we’ll have to endure another Yankees number retirement in August? Paul O’Neill, whom most Yankee fans hated upon arrival having given up Roberto Kelly to get the little-known right-wing schizoid Ohioan who couldn’t handle lefty pitchers well at the time of his acquisition? Enough with the lame number retirements in the Bronx. The Andy Pettitte ceremony was the worst. Until Luis Sojo gets his number retired in the Bronx, I’m not on board with any of these shenanigans.

The Game is on in early-April and that’s when I was born. I’m a third-generation Pittsburgh Pirates fan until I die. The team owner refuses to use the revenue sharing and luxury tax money to invest in players, and that makes me want to punch him in the face, which I could’ve when I worked in an office with him back in 1987 in Wheeling, WV. Had I known he would someday in the future own my team, I’d have shoved him down the elevator shaft given the opportunity. It would’ve been a baseball version of The Terminator acting on behalf of Skynet supported by an underground nation of hopeful Bucco fans who’d embrace Mark Cuban’s efforts to buy the historic black-and-gold franchise.

Every spring, the Pirates emerge with some exciting young players, many of whom will be New York Yankees within four seasons. Oneil Cruz is one of them, a six-foot-seven sideshow shortstop who routinely crushes baseballs as a lowball lefty powerhouse in the batter’s box. We got him from the Dodgers in the 2017 Tony Watson trade. Presently, he’s already been demoted to the AAA camp, but his anticipated arrival at PNC Park this season will no doubt be another repeat of the slow rollout of Brad Eldred, Pedro Alvarez, Josh Bell and Gregory Polanco. Most Pirates fans wanted Cruz in the Opening Day lineup, but they have no creds, these fans who inexplicably buy the tickets.

I watched a few Pirates Spring Training games and the damn equipment manager keeps giving out uniform numbers that should be shelved until Cooperstown eventually calls. Pitcher Zach Thompson, whom we got from Miami in the nutty Jacob Stallings trade, took the hill in Bradenton the other day wearing Dave “The Cobra” Parker’s number 39 shirt. They also gave Manny Sanguillen’s sacred 35 jersey to some ham-and-egger relief pitcher. This is what sends me over the edge.

If you’re over the age of 50 you trade in baseball nostalgia, especially if you support a small-market team owned by a tightwad with no interest in winning, things like uniform numbers are elevated to extreme importance.

I do like the fact the Pirates have added girth and have tried a gene-splicing experiment to reanimate Matt Stairs/John Kruk via Japanese heavyweight Yoshi Tsutsugo and former Brewer Daniel Vogelbach, a cartoon character of a barrel-chested Floridian. With the new DH in the National League, both will get at-bats or play first base. Tsutsugo is listed at 225 pounds, while Vogelbach weighs in at a generous 270, according to the website Baseball Reference. That’s 495 pounds of slugging right there.

Vogelbach used to kill the Pirates when he was with Milwaukee, so I’m looking forward to watching these middle-of-the-lineup portly Pirates, though manager Derek Shelton puzzled everyone by batting Vogelbach lead-off during several March games. The fact that we have two catchers both named Perez I think bodes well in terms of luck.

As for the rest of the National League, I see the Phillies as a dangerous squad able to slay West Coast foes in the post-season via their fans and the weather. Atlanta can’t get it done without their All-American storylines from first base. Also, very tired of hearing about Dodgers supremacy. Fuck the Mets and all of their spending. Injuries will once again kill them.

Last season, the MLB.com propaganda machine was pushing the Padres as the second coming of Odin’s Army. They finished third in their division. This year, the Blue Jays seem to be getting the PR boost from the league shills (maybe the online MLB hacks are obsessed by dreadlocks?). Not buying the shores of Lake Ontario hype from the Great White North. They will cancel out Boston who will cancel out the Yankees.

I like the Seattle Mariners as out-of-nowhere overachievers and they will outfox the White Sox and advance to face the Fightin’ Phils in the 2022 World Series. Who wins? I don’t know. I’ll be busy and distracted preparing for the 2022 World Cup soccer tournament from Qatar, which will fill up the holiday season with proper sports watching and wagering. Can’t wait. The U.S. is in, Italy’s out. Senegal’s in, Egypt’s out. We’ve been drawn with England, and we’ll face them the Friday after Thanksgiving. Praise Jesus and his FIFA credentials for that. The soccer tourney begins three days after the 44th anniversary of the Jonestown Massacre and one day before the 59th anniversary of the John F. Kennedy assassination and just a few weeks after the conclusion of the World Series. In other words, it all bodes well for an upset. How great will it be to watch the Detroit Lions play NFL action on Thanksgiving Day, then watch the U.S. play England in the World Cup while everyone is off work and there’s nothing else to do? The ratings numbers will be through the roof. The last time the U.S. played England in the World Cup, the local arthouse cinema in my town broadcast the game on their big screen and it was sold out and rowdy with lots of kids making noise. I hope this happens again as it’s delightful that the stars have aligned for both England and the U.S. to probably advance to the next round in the tourney.

Gotta love the agenda of pro baseball ending and international soccer beginning just a few weeks later. Looks like 2022 will fulfill its role as the comeback year in that regard, ending a rather volatile two-year losing streak for the sports fans in this God-forsaken country.