Making the most of a pandemic with limited activities resuming in Georgia, including baseball team the Savannah Bananas. 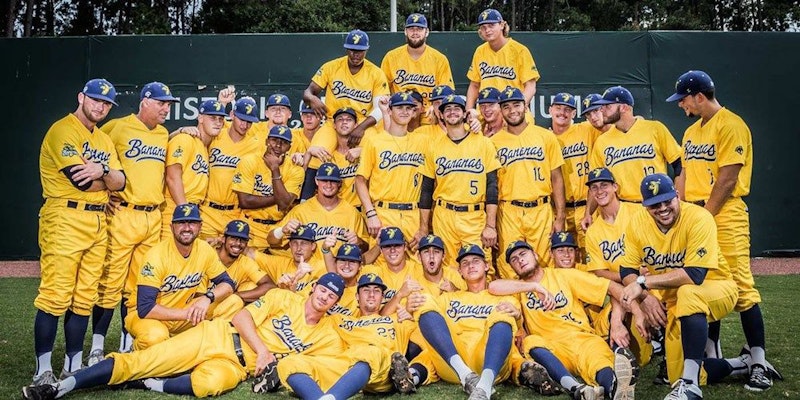 There’s small likelihood that you’ll attend a baseball game at a stadium—any stadium—in the foreseeable future. That is, unless you happen to find yourself in Savannah, Georgia or nearby towns, in July and August. The Savannah Bananas, and teams in the Coastal Plain League have your hardball cravings covered.

Whether or not you agree with Georgia’s re-opening, the Savannah Bananas will begin league play on July 1st at their home, Grayson Stadium, on—where else—Victory Drive in Savannah. Grayson Stadium opened in 1926, and has seen Ruth, Gehrig, Cobb and Mantle all play on its field. Capacity is technically 4000. Due to the pandemic, the Bananas will play in front of deliberately distanced crowds of no more than half that many fans. But they’ll play.

The Savannah Bananas were born in February, 2016, and are currently on a 60-plus game sellout streak, and that’s not going to change any time soon. To experience the Bananas is to see baseball unlike anywhere else, yet at the same time, to maintain the traditions and culture of baseball at its best.

Owner Jesse Cole is a marketing genius. Dressed for each game in one of his seven yellow tuxedos and top hat, Cole exhorts the home crowd, takes selfies with his adoring fans, and seems never to operate at less than a fever pitch. In 2018, Cole brought kilts to baseball.

During a front-office brainstorming session, one team exec suggested having the team play in kilts. On the day they took the field so attired, Mother Nature frowned, and the game was called, due to a storm, after less than an inning of play. The following week, the team was able to try again, and headed into their final at bat down several runs. An extremely unlikely rally followed, the Bananas won, and were, from that moment, known as “undefeated in kilts.”

St. Patrick’s Day is a big deal in Savannah, and the Bananas don’t play in mid-March, but that doesn’t stop the team from celebrating the day in their own style. The party comes four months later, on July 17th, when the kilt game is played. Last summer, the Bananas ran their unbeaten-in-kilts streak to two games. Once you get over the initial shock of seeing baseball players in kilts, the game is just the game—Banana-style.

Safety and security announcements are sung to the crowd to the tune of a current pop hit. A baby is presented, Lion-King like, dressed in a banana onesie, in the center of a circle of kneeling, kilted ballplayers at home plate. Between innings tomfoolery includes a chance for one young fan to plant a whipped cream pie in his father’s face, no less than three times. Another break brings several Bananas to the roof of the third-base dugout to dance to DJ Otzi’s “Hey, Baby (ooh, ahh) Will You Be My Girl,” with well-timed flips of the kilt. The party never stops.

It may seem that $18 is a steep price to see college ballplayers, but bear in mind that the ticket includes all-you-can-eat hot dogs, burgers, sausages, chips, cookies, soda and water. When a Bananas staffer learned I was at my first game at Grayson, she left me in the concession line and returned moments later with commemorative buttons declaring my “First Banana” attendance. I’d be remiss if I didn’t mention the dancing geriatric crew, the Banana Nanas, or the cooling Banana-fana, available at the concession stands for your comfort in the sultry Georgia evening.