The very east-coast game is thriving in Colorado, but don't look for it in many other states. 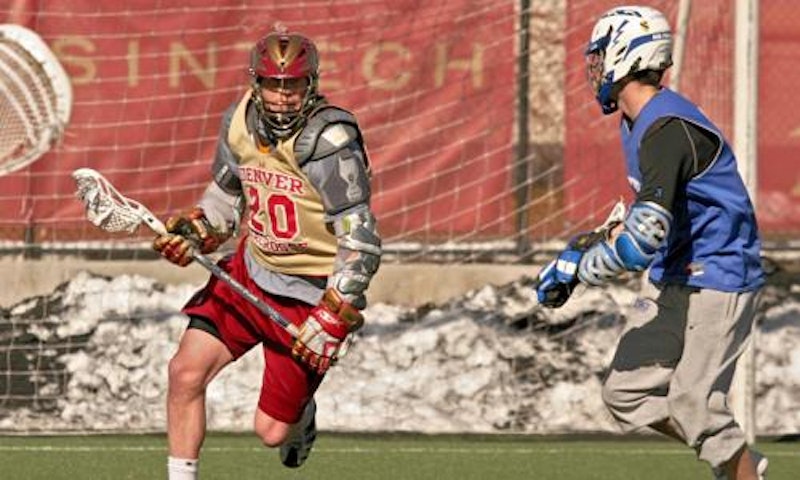 The NCAA lacrosse season is underway and like every other year, the same teams remain in the Top 25 rankings. The order has been slightly re-arranged since 2008, yet once again the front-runners of this exclusive sport remain in the athletic bubble east of the Mississippi River.

This isn’t to say that the sport hasn’t grown. In recent years, Division I lacrosse games have benefited from nation-wide coverage on ESPNU, and the National Championship has transitioned from a tiny fan-based audience to a relatively large spectacle. As more and more people become aware of the sport, youth programs are popping up across the country. A few years ago in a state like California, lacrosse would have found its place between curling and shin-kicking in a top-20 list of obscure sports, but this state has now become a hotbed of competitive youth and high school programs. California players have slowly begun to infiltrate the Division I rosters which were previously dominated by Virginia, Maryland, and New York. However, although the sport is expanding on the youth scale, collegiate progress remains stagnant. The West exists simply as a feeder program for the traditional powerhouses of the East, with no Division I team to call its own.

One notable exception to the rule is Colorado, which boasts the only two DI lacrosse programs in the West, University of Denver and the Air Force Academy. Denver in particular has remained competitive on the national scale for years, which led to their inclusion in the ECAC in the 2009 season. This marks a huge step for the expansion of the sport, yet despite the nationwide explosion in lacrosse’s popularity on the youth and high school level, the state of Colorado remains in its isolated box.

Colorado’s story is unique. According to Denver’s head coach Jamie Munro, the sport developed in the 1960s, when East Coast kids traveled to Denver in masses, taking their lacrosse sticks with them. The sport progressed to the point where it had gathered enough support to sponsor the Vail Tournament, which brought several elite teams to Colorado to compete. In 1988, the professional American Lacrosse League was formed and the Denver Rifles became one of the six franchises that participated. The league lasted a mere five weeks, but the players stayed and the grass-roots development of the game continued until the University of Denver put out a Division I lacrosse team in 1999.

Colorado remains an exception, but as the sport is currently experiencing a similar but broader boost in popularity, it makes one wonder why collegiate-level lacrosse has hit a dead halt in its expansion. One common answer is Title IX, the number-one killer in men’s athletic programs. Since the gender-equality legislation was passed in 1972, it has brought an end to several men’s athletic programs across the country, primarily in the sports of wrestling, swimming, cross country, gymnastics, volleyball, fencing, and lacrosse. The unifying factor in all these sports is the lack of commercial appeal; these games and meets don’t bring in massive ticket sales, so they are the first programs to be cut when the quota needs to be filled.

However, the recent boom in lacrosse’s popularity demands that a change be made. Western lacrosse players are in a bind. Most Division I programs have a long-established recruiting network with the top high schools of the east and only recently began to expand their scouting gaze toward the Pacific. Since the West Coast has no Division I lacrosse options, the sport has thrived in this region on the club level.

Inside Lacrosse stopped posting club team rankings in 2006 (since no one outside those who actually compete have any real interest in the results), but the 2006 rankings show that club lacrosse is dominated by the west. Eight out of the top ten club teams in ’06 came from the West Coast, which stands as a testament to the expansion of the sport. Granted, if these teams were adopted into Division I, they would be annihilated for the first 10 years or so, but that’s the case in any sport. The West needs a chance to develop the way that Denver did, and in time, collegiate lacrosse will become a nationwide sport.

Given the current economy, this is not much more than a pipe dream. Women’s lacrosse has expanded to the point where a Western athletic division, the Mountain Pacific Sports Federation, became necessary, boasting six teams that have remained competitive in the Division I sphere. But the reason that women’s lacrosse has moved forward where men’s has hit a wall isn’t entirely the result of Title IX. The reason that schools are so quick to cut and so hesitant to start Division I men’s lacrosse programs is the enormous amount of funding the sport requires. Athletic directors are looking at a minimum roster of 30 players, all of which require a helmet, a stick, gloves, shoulder pads, arm pads, jerseys and shorts, compared to women’s teams whose only expense besides uniforms and sticks are a pair of cheap goggles.

So what’s the solution? There are several universities whose Division I football programs generate enough revenue to be self-sustaining. A cut in their funding could create room in the budget to put out a lacrosse squad here and there, but considering the amount of political pull these coaches have with their schools’ administrations, this possibility is highly unlikely. Realistically, lacrosse’s dead crawl toward the Pacific will not make any progress without the help of outside contributors, loyal supporters such as those who saved the Arizona State wrestling program from its Title IX-induced elimination. With the future of the sport in their hands and the hefty bill that new teams require, it appears that lacrosse will sadly remain an East Coast phenomenon for a long time.