Orioles Fans Should Celebrate While They Can

The front office’s refusal to hire legitimate starting pitchers dooms the O’s to the cellar once again. 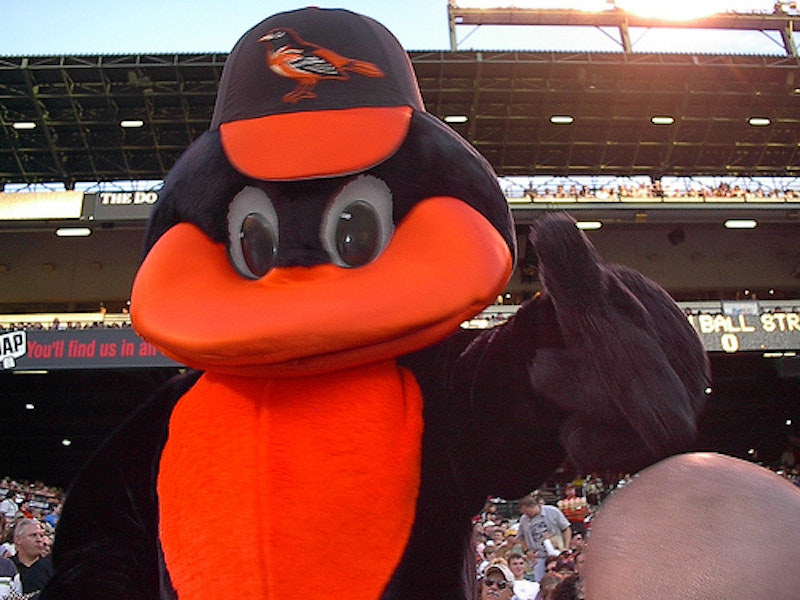 The family and I attended our first game of the ’09 season at Camden Yards on Sunday afternoon, and aside from a wind that whipped around our seats near the press box, and the O’s getting slaughtered by the Rays, and the ever-infuriating out-of-town scoreboard that rotates, every five seconds it seems, AL and NL games, it was pretty swell to see live baseball again. The Orioles have surprised everyone in town by taking four of six in the first week—against the Yanks and Rays—and who knows, the team may once again tease the dwindling diehards and stay in the hunt until around Father’s Day, and then utterly collapse for the rest of the year—but I smell real trouble brewing.

First, the inescapable reality of the recession. As I said, it was chilly, but a crowd of just 15,531 for a Sunday day game (Easter notwithstanding) against the reigning American League champs doesn’t bode well for those summer weekday nights when the team has lost eight in a row. The O’s lineup is a lot better with a maturing Adam Jones, bona fide All Star Nick Markakis and Brian Roberts still reaching first base and promptly stealing a bag or two. And the defense is far superior to the sad-sack clubs of the past decade, especially with an outfield that puts the Yanks’ “defenders” (the au courant term now for “fielders”) to shame. But the pitching? Yeesh.

As a friend of mine, and long-suffering Orioles diehard—he’s too young to remember the days of Palmer, Robinsons Brooks and Frank, Cuellar, McNally, Blair and Earl Weaver—said the other day, “I don’t understand what the Orioles did with their pitching this year. It’s fine to worry about rushing the young arms, but it’s malpractice not to break spring training camp with more than two major-league arms.”

That, of course, brings up my current hobbyhorse regarding this team: Would it really shred owner Peter Angelos’ portfolio to splurge on the $5 million that the inexplicably still-unsigned Pedro Martinez is asking? Yes, the broken-down Pedro’s in the last year or two of his Koufaxian career, but even in this economic climate you’d think the $5 mil—and Martinez, although a proud man, would likely retreat to $4 mil—would be worth every penny not only to attract more fans and win maybe eight games, but perhaps more importantly act as a mentor to the young O’s pitchers. It’s a no-lose situation; then again, Angelos and his succession of cautious general managers seem resigned to losing on and off the field. Sure, current GM Andy MacPhail is a smart guy, but he moves about as fast as Boston’s Mike Lowell or the O’s Aubrey Huff do on the base paths.

There have been whispers—and I emphasize “whispers” because it’s no fun being called flat-out nuts—that the O’s could be this year’s Rays. Not a chance, unless they find starting pitchers with a little more on the ball than cast-offs Adam Eaton and Mark Hendrickson.