Give Me Back My Baseball Innocence 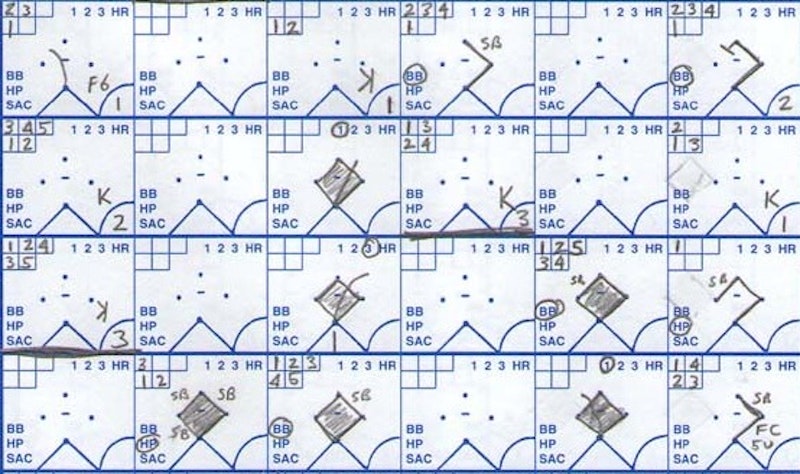 There are two options for this year’s baseball season: ignore everything you’ve learned, throw history and statistics to the wind, play the ignorant fool or resign yourself to another lost season, another doomed failure without a scrap of hope. Can you feel the excitement?

This is the least excited I’ve ever been for a baseball season of watching my beloved Baltimore Orioles. I have no one to blame but myself (and maybe Bill James) for my Faustian quest to understand the game of baseball. Soccer may be the beautiful game, but baseball is the perfect game, structured, measurable at every turn. Luck is but a whim in baseball, washed out over the course of the six-month, 162-game season. The cream rises to the top. There is a marvel in all of this, almost a feeling of justice—finally, a true meritocracy in a cruel, unfair world.

Like many fans, my first introduction to the world of statistics came via Michael Lewis’ Moneyball, a profile of innovative general manager Billy Beane. It unearthed a bevy of statistics that Beane was using to measure the performance of players around the league—statistics that weren’t necessarily new, but certainly weren’t part of the mainstream baseball management discourse. I was fascinated. It was a startling revelation: maybe everything I grew up thinking and knowing about the sport was wrong. With so much information, fans were at a crossroads: understand the game fully or retreat to blissful nothingness. I chose the latter, but I don’t know if I chose correctly.

The next step was my foray into the world of Baseball Prospectus, a team of math nerds/savants that have boiled stats down to a series of acronyms that provide a nearly exact measure of each facet of a baseball player’s output. It’s gotten to a point where the combination of players’ offensive and defensive stats can be converted into the amount of wins that an individual player brings to his team. By comparing the statistics of today to the trends of the last 100 years, they can pretty accurately predict a player’s output from year-to-year. Thus, they can pretty accurately predict a team’s record from year-to-year.

And here is where the loss of innocence comes in. Check out Baseball Prospectus’ predictions for the 2008 season. Now, compare those to the actual records. They can’t predict everything, but for the most part, they are soundly able to nail down the basic records of each team. They even were ahead of the curve in predicting a winning season for Tampa Bay Rays.

Day to day, these predictions and stats don’t necessarily hinder the game-watching experience. Even the worst clubs win at least 60 games a year, and some of those are against far superior teams. Being able to understand why Manny Ramirez is a great player beyond the visible “Wow, I am terrified of his hitting ability” definitely enhances the interaction with the game. For teams clustered at the top, these predictions and statistical anomalies become nearly irrelevant when you’re talking about two teams with stellar projected records duking it out over the game or two that separates both their hypothetical ability and their actual win total.

But if your team is stuck in the cellar, your hopelessness only gets magnified. While statistics provide little comfort to the top, they smother the dreams of those at the bottom. You can’t hope for miracle seasons because there just isn’t any evidence that they actually happen. “Surprise” teams like last year’s White Sox only seem to creep up in divisions where the teams are clustered around the middle. Last year’s AL Central didn’t have a single projected 90-win team. What’s so disheartening is the seeming inability for projected lower tier teams to break through to the top.

The Rays and White Sox were projected as average/slightly above average teams that caught a few breaks to accelerate their progress—there were no teams projected in the bottom third of their respective league that were able to make a leap beyond their expectations.

If the Orioles start off terrible, continue to play terrible, and end the season being terrible, it won’t matter what this year’s lousy projections were, it will just be a terrible season. But if they start playing well at some point, as they did in the first half of 2005, then I won’t be able to get excited like I once could. After that disastrous season, I began delving into the world of modern baseball knowledge. I realized then that you can’t overcome fate or statistics. Those Orioles were destined to be lousy and they were, despite a tantalizing blaze of hope. And now, the Orioles’ 2009 season of inevitable woe is likewise already written in stone. Although this year has just barely begun, the only thing left to do is hold out hope for next year.