The Fickle Fandom of a First Grader

How I told my kids LeBron left the Heat. 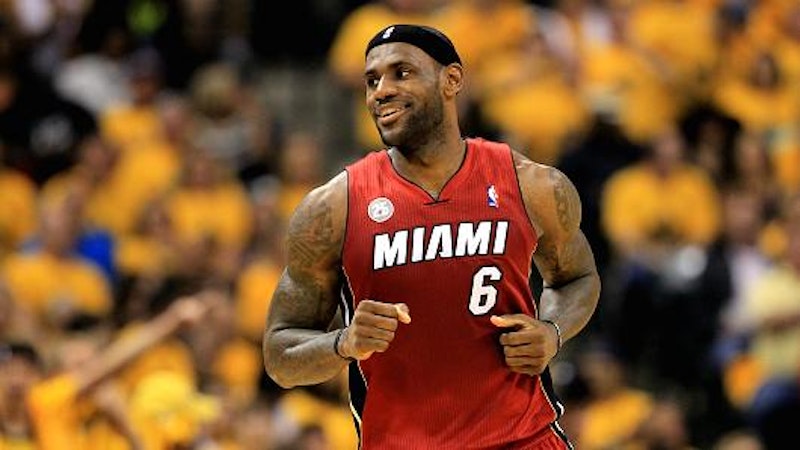 As a Miami Heat fan since 1989, the team's recent LeBron James-fueled run of success was tremendously entertaining. As my interest in the nearly unwatchable NFL waned over the past few years I found myself following more and more pro basketball. I passed the interest onto my kids with the help of the NBA's Gametime app. My son and daughter, ages seven and four, know two things about basketball: 1) they root for the Heat and 2) LeBron James is the best player in the world.

Miami's sad performance in this summer's NBA Finals against the San Antonio Spurs brought an abrupt end to another rewarding season. I chalked up the failure to the Spurs' hot shooting and the ineffectiveness of Dwyane Wade. There was reason for optimism as just last summer Manu Ginobili fell flat in the Finals only to bounce back 12 months later to exact his revenge. Why couldn't Wade take the same path? I figured the team would be right back in contention next season just as soon as Wade, James, and Chris Bosh signed new long-term contracts.

After the season ended I braced my son for the possibility that James would leave the Heat for another team. He didn't seem too concerned, and frankly neither was I. The only real competition for LeBron's services seemed to be the Cleveland Cavaliers and, given the Cavs’ owner's childish rant after James' departure four years ago, a reunion seemed like a media-fueled pipe dream.

A slight miscalculation on my part, but a much larger one for Heat President Pat Riley. I was unsure of how to break the news to my son that James was heading back to Cleveland. He'd become a big LeBron fan over the past two years and was now faced with the prospect of rooting for a LeBron-less Heat team.

"Sure. You can root for whoever you want."

"Will you still root for the Heat?"

I tried to explain that rooting for a Cleveland sports team is like rooting for the antelope in a National Geographic documentary but the reference didn't register. The little guy carried on undaunted, pledging his newfound allegiance to LeBron's new/old team. His little sister was no defector. She announced that she was still a Heat fan, and incidentally she wouldn't know LeBron James if he came to our house for dinner.

Pat Riley's Heat squad rebounded to re-sign Bosh and Wade to new deals and import Luol Deng and Josh McRoberts. The Heat are still one of the top five Eastern Conference teams on paper but James' Cavs are a safe bet to add Kevin Love in the next month, a move that’ll send preseason expectations through the roof.

I hold no ill will towards James, especially since his free agency didn't bring my traitorous offspring to tears. James was largely responsible for the most successful run in the history of Heat basketball but he'll always rank behind Alonzo Mourning, Glen Rice, and Wade on my list of favorite players. James is a delightful footnote; to my son he was the whole story.

Last week it was announced that Miami and Cleveland would face each other in a nationally televised Christmas Day matchup. I suggested to my son that we place a friendly wager on the game, figuring that gambling was cool for elementary school kids as long as we traded in sugary treats and not cash.

"Well, if the Cavs win I'll give you my Christmas cookies."

"And if the Heat win you get my cookies?"

"Nah, let's just watch the game together and eat our own cookies."

"Good idea." Perhaps the best idea ever conjured by a Cleveland sports fan.