Justin Verlander Is Not an MVP

Now can we please start talking about Miguel Cabrera? 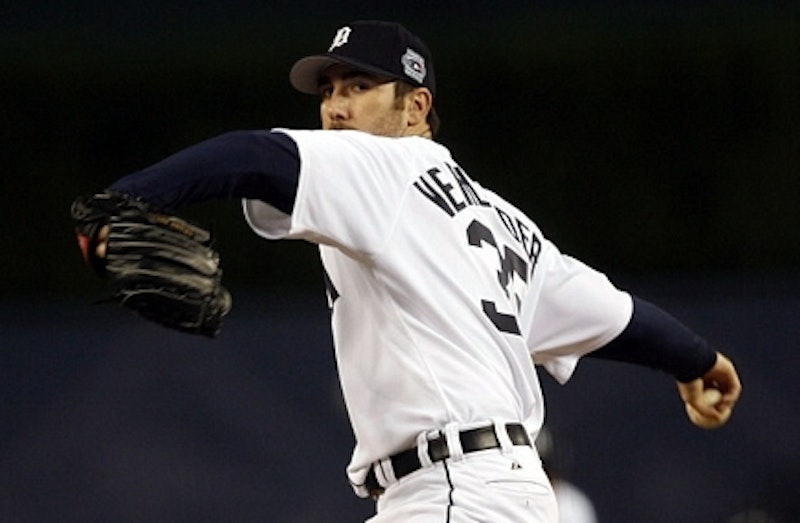 Sportswriters everywhere are patting themselves on the back for acknowledging that Justin Verlander is an MVP candidate. And that’s all he is, a candidate. Verlander was easily the best pitcher in the American League this season, possibly in all of the Majors, but that still doesn’t put him over the top in terms of MVP votes. This isn’t because I believe pitchers shouldn’t be in contention for the award; Pedro Martinez was absolutely robbed in 1999. Verlander simply doesn’t deserve it. Position players like Jacoby Ellsbury, Jose Bautista, Miguel Cabrera, Dustin Pedroia, and Curtis Granderson have outmatched the hurler in terms of value.

Without his MLB leading 24 wins, the Tigers’ ace wouldn’t even be in the discussion for the trophy. Wins are supposed to be a statistic of the past, right? Apparently not. Aside from his W’s, innings pitched and ERA are the only stats Verlander led the league in. I’m not trying to be a snob or a stathead. Those are two very important numbers, and definitely define a Cy Young award, but not the MVP. After that, the righty is third in K/9, eighth in BB/9, 13tj in ground ball percentage, and fourth in FIP.

FanGraphs tags his value at an even 7.0 WAR, right behind CC Sabathia, 7.1, and Roy Halladay, 8.2. Not only does Verlander lose out in the Major League WAR leaderboards, he doesn’t even lead all pitchers. The stat has its flaws, though, and the reason he’s so far behind Halladay is because FIP didn’t like his performance this season nearly as much as most sportswriters do. And that just re-starts the argument over scouting in combination with basic statistics and sabermetrics favoring advanced, unproven stats. FIP isn’t perfect, but that doesn’t mean it should just be discarded.

For now, though, we’ll focus on Verlander’s stiff competition, which grew a little thinner after the Red Sox were eliminated from post-season play. Ellsbury looked like the clear favorite before last Wednesday night, when he ended his breakthrough year with a .321/.376/.552 line, 32 home runs, and 39 stolen bases. If the month of October is what’s keeping Jose Bautista from winning the award, then the same rule should apply to Ellsbury. Bautista is the most deserving player, clubbing 43 homers with a .305 average, .447 OBP, and an astounding 20.2 BB%. Curtis Granderson of the Yankees is another name to consider, as he almost dethroned Joey Bats as the home run king. His pedestrian .262 AVG and poor defense in center field will suppress most of the first place votes, but you can never tell with Yankees diehards.

With the unwritten playoff rule taken into consideration, Miguel Cabrera is the real MVP. He led the Majors in both batting average and on-base percentage, blasted 30 home runs, and was the cog in Detroit’s offense all season. Writers use Verlander’s 24 wins as evidence that the Tigers wouldn’t be in the playoffs without their ace, but without Cabrera, Verlander never would have won so many games. Regardless of who’s pitching, without Cabrera, Ozzie Guillen would still be in Chicago.