The Rays Are the Real Moneyball Team

Scant financial resources haven't stopped the Rays from putting together a great team. 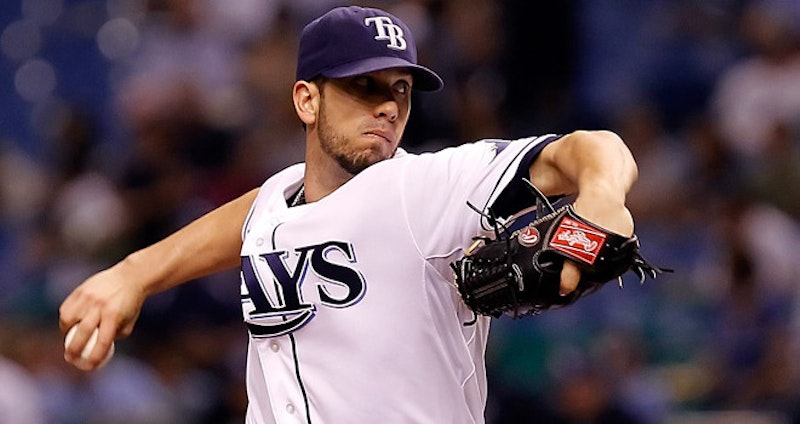 The release of Moneyball, based on Michael Lewis' book, was perfectly timed with the Tampa Bay Rays’ race to the American League Wild Card. Much like Billy Beane's Athletics of the early 2000s, the Rays are baseball's ultimate underdog. Tampa's $41 million payroll is the lowest in the America League and yet they have now qualified for the postseason for the third time in four seasons. Lewis wrote the book and Beane had the interesting back story but Tampa is the real home of Moneyball.

Moneyball, the book, focused on Beane's quest for undervalued assets that he could acquire cheaply in an attempt to field a competitive team with limited resources. The book centered on Beane's use of statistical analysis to uncover these undervalued players, with a focus on players with high on base percentages. Though no longer the case, OBP was undervalued at the time. Moneyball as a baseball philosophy is often misinterpreted as "get guys who get on base." In reality Moneyball is a business book about finding inefficiencies in the market and taking advantage of them before the competition catches on. The concept could apply to any industry. One thing that the book, and the resulting overuse of the term Moneyball, overlooked was Oakland's incredible starting rotation.

I'm not saying that Beane didn't deserve a lot of credit for turning the A's into a winner, but I don't think that signing Scott Hatteberg to play first base and having a preoccupation with Kevin Youkilis are what made the A's winners. Oakland went to the playoffs in those years because they had Tim Hudson, Mark Mulder and Barry Zito at the top of the rotation. Young, cheap and productive makes for a fine starting rotation. Just ask the Giants of 2010. The Giants weren't considered a Moneyball team because of their payroll but just like Oakland they won because of excellent young starting pitchers. Beane should be commended for developing a tremendous young rotation and using his limited budget to supplement them with enough offense to be consistently competitive.

That brings us back to Tampa. If you haven't read Jonah Keri's excellent book The Extra 2% do yourself a favor and buy it now. The story may not be as romantic as Lewis' Moneyball but the results are even more impressive. Keri's book covers the transformation of Vince Naomoli's laughingstock Devil Rays into Stuart Sternberg's low budget powerhouse Rays. Sternberg and General Manager Andrew Friedman are the book's central figures. The Rays, just like Oakland and most other teams these days, use a number of advanced metrics and ever evolving statistics to evaluate players and dictate in-game strategy. The Rays’ goal is to put each player on the 25-man roster in the best situation to succeed. Manager Joe Maddon is the perfect man for the job and he masterfully pulls the levers in the dugout. Where Moneyball contended that A's manager Art Howe could have been replaced by a monkey with a laptop, The Extra 2% gives Maddon his due credit for the Rays’ remarkable success.

Of course, for all of Friedman's and Maddon's work acquiring guys like Carlos Pena, Casey Kotchman, Matt Joyce, Ben Zobrist, JP Howell, Kyle Farnsworth, etc. for next to nothing, the key to the Rays’ success has been cheap, young, outstanding pitching. You can do all the statistical analysis you want but James Shields, Jeremy Hellickson, David Price, Wade Davis, and Jeff Niemann are the reason Tampa is in the playoffs. The Rays have already made room for youngster Matt Moore in the playoff rotation. The Orioles, under Andy MacPhail, operated with the slogan "Grow the arms and buy the bats." They have failed to do either. The Red Sox, with their vast resources, didn't have one impact young pitcher to call up in an effort to right their sinking ship in September. The Yankees for years refused the temptation to deal Phil Hughes or Joba Chamberlain in any deal for an established starter. What do they have to show for it? Three years of baffling, frustrating results and Freddy Garcia as their number three playoff starter.

The Rays have mastered the hardest thing to do in baseball, consistently develop high quality pitching. And perhaps more importantly, they've kept those young arms healthy. Tampa's 2011 payroll of $41 million won't keep the current rotation together for long. In fact, the team's current five-man rotation would probably be worth about $550-600 million on the free agent market. It is imperative for the Rays' farm system to continue to crank out high quality starting pitchers in order for the team to maintain its incredible run of success. You can find relievers anywhere and cobble together a bullpen, a point made in The Extra 2%, but there is no substitute for excellent starting pitching.