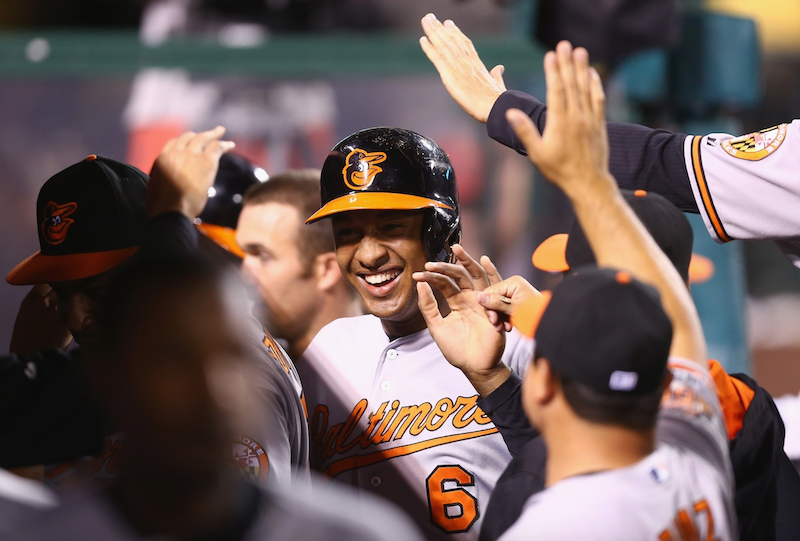 The Baltimore Orioles have spent the past two weeks sabotaging their Wild Card hopes. A poorly timed combo platter of terrible starting pitching and offensive ineptitude has choked out the team’s postseason dreams. There’s plenty of blame to go around in Baltimore with GM Dan Duquette receiving much deserved criticism. Stalwarts of previous playoff runs like J.J. Hardy, Matt Wieters and Chris Tillman have failed to pull their weight. The recent collapse has given O’s fans an early start on what figures to be a long offseason.

The O’s face an uncertain future with Wieters, Chris Davis, Wei-Yin Chen and Darren O’Day heading for free agency. The farm system simply isn’t equipped to absorb the loss of such established big leaguers. The franchise will need the continued maturation of players like Jonathan Schoop, Mychal Givens and Kevin Gausman. Schoop has certainly done his part.

The second-year second baseman was off to a hot start in April before suffering an injury. Schoop spent nearly three months rehabbing his knee as Buck Showalter attempted to get by with the Ryan Flaherty/Everth Cabrera duo at second base. When Schoop finally returned to the lineup in July the hope was that he could stay healthy and add some pop to the bottom of the Baltimore lineup. Schoop has done that and more over the past two months.

Schoop struggled at the plate as a rookie in 2014. He hit just .209 on the season and struck out in more than 25 percent of his at-bats. Schoop’s 16 homers offered some hope, but his .244 OBP made him a lineup liability. He spent most of last season hitting in the bottom third of the O’s lineup. The saving grace for Schoop was his stellar defense and fantastic throwing arm.

Schoop has improved in every offseason category in his second year with the O’s. Schoop’s game-tying homer in the ninth inning on Wednesday night gave the waning Camden faithful a much-needed thrill. It was also his 11th home run to go with 12 doubles in just 60 games. Schoop has managed to up his slugging percentage from last season’s mark of .354 to .498. The second baseman has also raised his average to .290. Schoop’s current .343 BABIP may take a hit but he does consistently hit the ball hard.

After entering the season as an unproven youngster, Schoop’s recent productivity has earned him a bump up in the lineup. He’s been hitting sixth regularly in an effort to provide additional offense for the slumping birds. Schoop has the power to hit 30 home runs and, with Wieters and Davis likely parting as free agents, he may be counted on to do so as early as 2016. Given his power and defense Schoop looks like a long-term asset for the O’s making second base one less offseason question in search of an answer.