The Dodgers Have a Strange Prospect Strategy

Why did Corey Seager toil in the minors for so long? 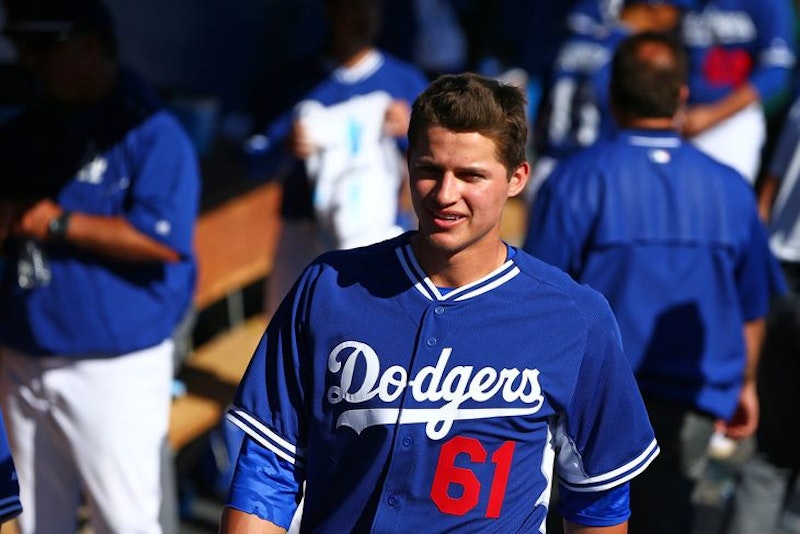 As a baseball fan and man of simple pleasures, late night West Coast baseball comforts me. I’m not a Dodgers fan but that team is my late night fare of choice. The Dodgers’ home broadcasts feature living legend Vin Scully and a 40 percent chance of seeing Clayton Kershaw or Zack Greinke clown big league hitters. The available combos beat the heck out of the local news for viewing pleasure.

As a frequent, though emotionally unattached, Dodgers observer I remind myself that the team is costing Magic Johnson and his fellow owners more than $250 million this season. Aces like Kershaw and Greinke don’t come cheap and the Dodgers lineup is mostly made of fading stars or league average players. Adrian Gonzalez is a nice player, but he shares an infield with the Chase Utley/Jimmy Rollins keystone combo recently imported from Philly. The Dodgers’ outfield has been so unproductive and injury-depleted that the team actually traded for Mariners’ castoff Justin Ruggiano earlier this week and immediately started him in left field. Third base is manned by late-bloomer Justin Turner after the team cycled through Juan Uribe and Alberto Callaspo. A team with that kind of payroll shouldn’t have this many weaknesses.

Another strange thing about the Dodgers has been the team’s unwillingness to push consensus top prospect Corey Seager. While the Cubs (Kyle Schwarber and Addison Russell), Twins (Byron Buxton and Miguel Sano), Astros (Carlos Correa) and Mets (Michael Conforto and Noah Syndergaard) have called on top prospects to boost their playoff chances the Dodgers held Seager back until Thursday. The desire to run out Rollins and Utley in the middle infield every day while Seager toiled at Triple-A is the kind of cost-conscience, present-be-damned strategy that club president Andrew Friedman made trendy in Tampa. The Dodgers operate under no such financial restrictions, made obvious by the team’s staggering payroll and recent acquisition of Utley.

Perhaps I’m just being hyper-critical and Seager really wasn’t ready until now. The 21-year-old is considered a top five talent among minor league prospects and should immediately begin spelling Rollins at shortstop and Turner at the hot corner. Seager, the younger brother of Seattle third baseman Kyle Seager, slashed 48 extra base hits between Double-A and Triple-A this season to go along with an OPS of .831.

Friedman’s handling of third base this season has been curious. The Dodgers spent more than $60 million to sign Cuban import Hector Olivera in May and jettisoned him to Atlanta in July after less than 80 minor league at-bats. Juan Uribe, last year’s starter, was sent off to Atlanta in an earlier trade before ending up with the Mets. Justin Turner is a nice story as a Mets castoff, but he’s expected to be sidelined after suffering a hand injury earlier this week. Turner’s injury finally opened the door for Seager.

The Dodgers have a comfortable lead in the National West and can only be helped by the addition of a supremely talented rookie. While Freidman’s season-long infield shuffle apparently didn’t cost his team in the standings the better-late-than-never promotion of Seager should provide the Dodgers with an added dimension come October.