The Orioles' star pitcher, likely leaving after this season. 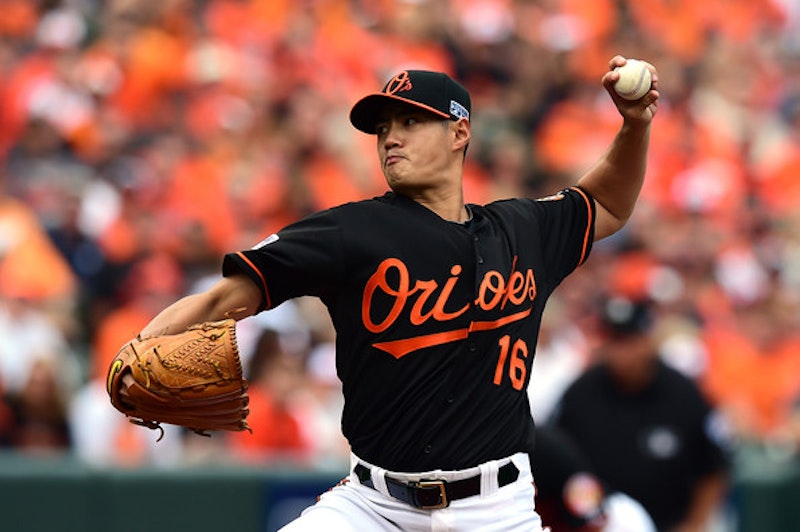 If you didn’t spend much time perusing Twitter on Thursday, and you’re not left-handed, you may have missed that August 13th is #lefthandersday. With the Baltimore Orioles seemingly stuck in neutral this seems like a perfect time to reflect on the performance of Charm City’s super southpaw, Wei-Yin Chen.

Chen will be a free agent following the 2015 MLB season. Given his impressive performance, and the Orioles agonizingly passive approach to free agency, Chen likely has about seven more weeks in orange and black before Scott Boras scores him a fat new contract in a new city. While David Price, Johnny Cueto and Zach Greinke will be the big ticket items at baseball’s Winter Meetings, Chen will be a more affordable mid-rotation starter that should be attractive to most teams with a hole in their rotation and $60 million to burn. Sadly, the Orioles only meet one of those criteria.

Chen joined the Orioles before the start of the 2012 season. He was a relative unknown import from the Japanese League and Dan Duquette’s first major free agent signing after accepting his front office job in Baltimore. Duquette signed Chen and Tsuyoshi Wada as a couple of lottery tickets in an attempt to stabilize the Orioles’ rotation. Wada never panned out due to injury and has since moved on to the Cubs. Chen posted an encouraging rookie campaign in 2012 and played a vital role in helping the Orioles return to the postseason for the first time since 1997.

Durability concerns dogged Chen’s sophomore season but he has been Buck Showalter’s most consistent starter since the start of 2014. Chen has out-pitched free agent import Ubaldo Jimenez, presumed staff ace Chris Tillman and the highly regarded Kevin Gausman. Chen’s low walk totals make his starts a joy to watch. The 30-year-old has saved his best for last, posting a 3.21 ERA, career high strikeout rate and career low hits per innings ratio in 22 starts. After winning 16 games in 2013, Chen has been hurt by Baltimore’s inconsistent offense. Don’t let Chen’s low 2015 win total of six fool you. He’s having his best season and with each start is likely diminishing his chances of returning to the Orioles.

The Orioles no doubt have the cash to retain Chen, along with Chris Davis and Matt Wieters, but access to funds and willingness to spend don’t go hand in hand. Dan Duquette has consistently fielded competitive teams during his four seasons in Baltimore, in large part by hitting on low-risk gambles like Chen. The Orioles have gotten remarkable return on their initial four-year/$15.5 million investment in the lefty. Duquette’s lottery ticket morphed into Jimmy Key with a translator.

Chen compares favorably to other upcoming free agent starters like Yovanni Gallardo and Mike Leake, with a notable exception. While Gallardo and Leake have amassed the bulk of their above average work in the National League Central, Chen has done his heavy lifting in the American League East. His proven ability to pitch effectively in the AL East should put Chen high on the wish list of divisional foes like the Blue Jays, Yankees and Red Sox. Boras will likely seek a contract for Chen that pays him more in 2016 than he made over his four seasons in Baltimore. Orioles fans will wish the lefty well and hope that his next stop takes him far away from the AL East.