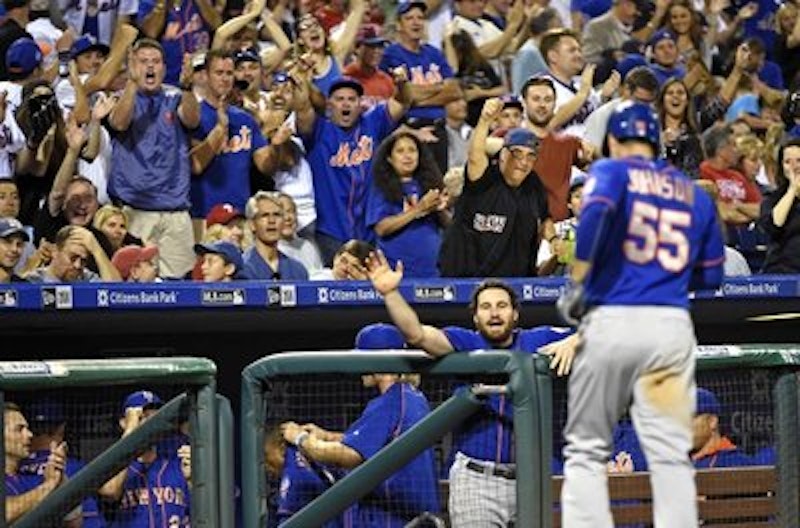 The baying glee of Mets fans has finally sent me to the edge. “First place in the NL East!” in case you haven’t heard. They’ve poured Resident Evil-like out of video stores, library parking lots, the gamester section of Best Buy, and the restrooms of Dairy Queen to board their triple-parked bandwagons. I want it to end. I want Jimmy Breslin to interview the gravedigger prior to the upcoming funeral for Competitive Balance in the National League. I want Daniel Murphy to jump the shark on his stalling Puch moped. I want the famous about-to-be-traded, crying shortstop to run ahead of the rest of the team like Bambi outpacing his doomed mother in the snow. I want the Phillies, Marlins, Rockies, Braves, Diamondbacks and Padres to just install postage meters in the dugout if they are going to mail it in against Terry Collins’ charges. I want Yoenis Cespedes to trip and fall thanks to the pawnshop he’s wearing around his neck. But enough about my needs (though it should be noted it is very difficult to stop hating the Mets when you were raised with the old NL East.)

One glance at the injustice of the National League standings is enough to make a fan of an NL Central team cringe and then never stop retching with dry heaves.

As Labor Day looms it’s time to dust off the faux-hatred and the superstitions. Yes, these are the divisional cards that have been dealt from the Park Avenue MLB wonks, so we install coping mechanisms. Such as never buying Vitamin Water because David Wright gets the dough, or never making a Seinfeld reference in a conversation because he’s a dopey Mets fan and never taking my hat off and turning it inside out to become a “rally cap” because I saw so many revolting dorks at Shea Stadium participate in that embarrassing headwear ritual through the years and I cannot ever resemble these pasty cretins. Ever. And as for the St. Louis Cardinals, no Anheuser-Busch products will be consumed during the active baseball calendar when that team is in operation. The color red is also to be avoided.

It’s been many seasons since the league has been so lopsided with one of the three divisions blatantly dominating the proceedings. So now this magic bullet of “two wildcards” sits wedged permanently into the chamber of one division where the Pirates, Cubs and Cardinals will participate in their own little BCS-style round-robin to see who plays the winner of the Mets vs. Kershaw/Greinke series. Who knows, maybe Bartolo Colon will issue the third no-hitter against the Dodgers this season and the Mets will win at least one game against Los Angeles in the postseason?

As for Jake Arrieta and the Cubs—to be 20 games over .500 and in third place, like the Northsiders have been much of mid-summer—it’s indeed a revolting development when you look across at the third-place Atlanta Braves and their 54-win-18-games-out sandbag operation in the NL East.

The Mets have a September cakewalk ahead of them full of Phillies and Reds AA mound opponents, with only the six games against the emasculated Nationals and three games against the Yankees as possible pratfalls. Hopefully the Yankees will schedule Luis Sojo Day in the middle of that series and dedicate his plaque in the Monument Park janitor’s shed while the team is across the fetid Rikers Island Channel playing the Mets at Citi Field.

I will not join the chorus demanding an end to the one-game Wild Card playoff. This is the structure dictated by the league, so we deal with it and try not to turn the sport into college football where whining gains results and every two years the system is upended. Nothing has to be changed with MLB, unless of course Buster Posey somehow gets injured and then everything must be altered to preserve his image and well-being. Word is Posey, who is secretly above Gen. Al Haig in the chain of command, had final say on the Iran nuclear deal. But don’t tell anyone.

There was a touching moment in Pittsburgh earlier this summer when I went west to see the Bucs sweep the somehow-in-first-place Dodgers. Under the moonlight hours after the Friday night victory on North Shore Boulevard, I had emerged the Hyatt Place hotel for my usual beer run and here approached a tall man in a suit. A very tall man. He had a Willy Loman gait because he was carrying two valises—well, just two soft briefcases in this case—and we were the only two souls on the street, though the area around PNC Park was still buzzing. I soon recognized the profile of Kent Tekulve, the Buccos lanky submariner closer from the 1979 World Championship squad. He’d finished another night of studio analysis of the Pirates game for their cable network ROOT Sports. Earlier in the day—much earlier during the “block party on Federal Street”—Teke, as he is known, sat under a tent sponsored by a Godawful Midwestern craft beer company to sign autographs for loitering Bucco fans. It was under-promoted and he’s certainly often seen around the ballpark, so there was not a lot of buzz surrounding his appearance. But my 10-year-old daughter got a thrill when he shook her hand and asked her name and signed a nice photo for her. She sees him on television nightly in upstate New York via DirecTV’s lifesaving MLB Extra Innings package which I have enjoyed for 15 seasons running.

“Good job, Teke, we got ‘em again,” I said later, under the darkness of the North Shore. “Thanks,” he said. “We got a long way to go.” Neither of us broke stride and he continued to his car in the parking lot across from the hotel. I stopped in my tracks and turned and watched him continue his stroll as the facts settled in. Here’s a man who has experienced the pinnacle of the game and shows up not only for the studio job but for under-promoted autograph sessions and doesn’t even get a decent parking space. Every Pirates fan over 40 loves this guy. Just a year ago, after a near-fatal Christmas heart attack, Tekulve underwent a successful heart transplant. He was weak but steady when he got to throw out the first pitch for the 2014 NL Wildcard Playoff at PNC Park against the Giants. It was a huge thrill to see him then, and even moreso to see him strong again this past summer striding along in the dark. Teke’s hearty recovery is one reason I believe the 2015 Pirates will survive and advance this October.

The August trip to Pittsburgh was mystical. We stopped in Altoona to ride a turn-of-the-century roller coaster—the oldest one still operating, according to Lakemont Park officials. The cars that carry you along at 10 mph look like something drawn by Dame Darcy, an eccentric illustrator/cartoonist/musician I met after moving to Brooklyn from Wheeling, W.Va., in the late 1980s. She would’ve liked Tekulve’s trademark “buggywhip” delivery. The amusement park also featured a water ride area, and all of the lifeguards were wearing Pirates caps. The truck stops east of Altoona carried lots of dusty Phillies souvenirs, but once we were in Altoona, we were obviously in Bucco country.

Dazed by continuous Pirates victories, the next night saw much of my family wandering the other direction on North Shore Boulevard in search of post-game dinner. We found the Jerome Bettis Grille 36, owned by the Hall of Fame Steelers running back. It was packed in the front bar area, but there were many empty tables covered with used plates and glasses in the rooms beyond. I asked the kid at the desk for a table. He seemed distracted and said there was a 45-minute wait. Baffling. Then I looked up and saw the televisions. Bettis himself was on TV giving his Pro Football Hall of Fame acceptance speech over in Canton. Live. Well, duh, I thought. Pittsburgh will always be a football city, but with the Pirates winning so much, I walked into the home of The Bus and didn’t even know he was being enshrined as we spoke. Oh well. I hope to do the same in October during game two of the NLCS, which is slated for Sunday, October 18, when the almighty Steelers host the Arizona Cardinals, of all people during NFL Week 6. Who knows? It could be a twin-killing. And the Pirates would go on to meet a legitimate American League foe in the Fall Classic—perhaps even a team with more than 85 wins.