The Orioles have squandered the right-hander’s talents. 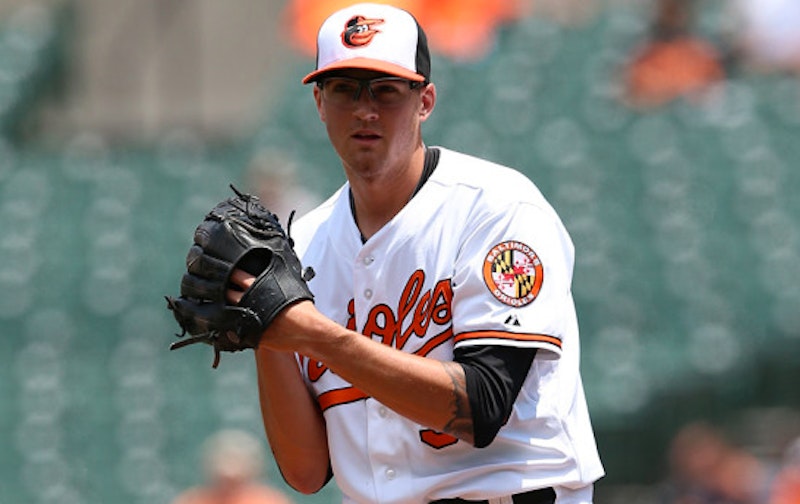 The Baltimore Orioles’ handling of Kevin Gausman’s early Major League career has been curious. Gausman’s been jerked around since early in the 2013 season. Shuffled from Norfolk to Baltimore and bullpen to rotation more times than I can count. Now, on the heels of a possible career-ending injury to prospect Dylan Bundy, it’s time for the Orioles to take the reins off Gausman.

It’s been a tough year for Baltimore pitching prospects. The Orioles felt reasonably comfortable trading lefty Eduardo Rodriguez to the Red Sox last summer for Andrew Miller because the southpaw ranked behind Gausman, Bundy, and Hunter Harvey in the organizational pecking order. Bundy, who has logged just 22 innings for Double-A Bowie this season, has been shut down due to shoulder inflammation. The setback marks the second time in three seasons that Bundy’s lost a season to injury. He’s pitched a total of 63 innings in the last three seasons and has moved from prospect to suspect. Harvey, who emerged early in 2014 as the salve to the ongoing Bundy drama, has also been hampered by injury. Harvey hasn’t thrown a pitch since last July. Gausman emerged as one of Baltimore’s best starters late last season, but he was relegated to the bullpen for the Playoffs, and has thrown just 17 innings for the O’s in 2015.

The fragility of young pitching should be apparent to the Orioles. With the organization currently getting nothing in return for the investments in Bundy and Harvey, every pitch Gausman throws for Triple-A Norfolk is a waste of resources.

The O’s have clawed their way back to the top of the American League East thanks to a stellar bullpen, a rejuvenated Ubaldo Jimenez, the emergence of Manny Machado and the continued finagling of manager Buck Showalter. The team’s received nothing but heartburn from starters Chris Tillman and Bud Norris. Tillman was the nominal ace over the past three seasons but he’s experienced a Revenge of the FIP in 2015. After outperforming his peripherals over the past few seasons, Tillman actually sports an ERA (5.67) nearly a full run higher than his FIP (4.76) this season. Norris has been downright atrocious. Even a dubious disabled list stint, and corresponding minor league rehab assignment, for a case of bronchitis hasn’t helped Norris right the ship. After winning 16 games in 2014 Norris has allowed a staggering 71 hits and 11 home runs in 55 ⅔ innings this season.

Norris was hammered again Monday night against Texas, giving up four homers and five runs in six innings. Barring injury to another starting pitcher Norris should not start another game for the Orioles. Gausman last pitched on Sunday for Norfolk, a shortened three-inning outing, and is line to take the mound for the Orioles on Thursday.

The Orioles should hand Gausman the ball on Thursday with the intention of him starting every five days for the rest of the season. The addition of a healthy and rested Gausman would rival the return of Tampa Bay’s Matt Moore for the most impactful July transaction in the division. Of course, that’s assuming the Yankees or Blue Jays don’t trade for Cole Hamels.

The Orioles have played roster games with Gausman for long enough. Dan Duquette has apparently valued Gausman’s remaining player options more than his ability to contribute. The young right-hander was a key contributor to the Orioles’ squad that won the AL East crown last season and he deserves the chance to do it again.