He chokes at the U.S. Open golf championship. 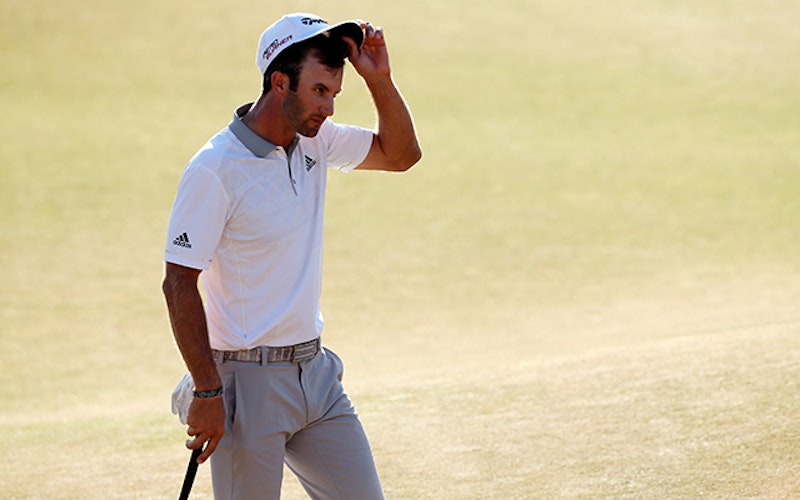 At the U.S. Open Golf Championship last Sunday, it came down to two players. It was the current wunderkind of the golf world, 21-year-old Jordan Spieth vs. Dustin Johnston, a 31-year-old player of immense talent (10 PGA Tour wins) who hasn’t yet entered the ranks of the true elite by winning a major golf title.

Spieth had a birdie on the final hole and his round was over. Johnson, playing just behind him, crushed his drive so hard on the par five 18th hole that he was on the green in two with just a mere five-iron. This left him with a 12-foot eagle putt for an outright victory. Two putts would have tied him with Spieth, and they would’ve had an 18-hole playoff on Monday. The situation was well under control.

There was only one thing that Johnson couldn’t do. He couldn’t take three putts to sink the ball. Three-putting in this situation would be about as likely as a good shooting guard missing three straight foul shots at the end of game seven to lose the NBA finals. But this is Dustin Johnson, and the man has a history.

The backstory behind the dramatic one-on-one conclusion at The Open is a fascinating study in contrasting competitors. Spieth is the fresh new sensation on the PGA tour who’d already taken this year's first major golf title in Augusta, Georgia with a runaway victory at the Masters. He's the squeaky clean sort, a humble, well-mannered Texan. That’s not implying he’s a pushover, because you don't accomplish what this Dallas native has without having some backbone.

On the final Friday of the tournament, contested on Puget Sound's Chamber's Bay golf course, Spieth was not living up to his reputation for humility. He was caught complaining on an open Fox Sports mic that the 18th hole—which had either been a par five or par four in the tourney, depending on the day—was "the dumbest hole I’ve ever played " and "unbelievably stupid." Given a chance to explain himself, Spieth stood his ground and said he was thinking of approaching the 18th green from the adjacent first fairway if the hole was set up as a par four on Sunday. Such a radical move (which I’ve never seen attempted) would’ve been very embarrassing for tournament officials, who moved the tee box back and configured the hole as a par five for the final day.

Dustin Johnson, while comparable to Spieth in talent, has few bona fides in the Eagle Scout department. Probably the best pure athlete in professional golf, the Columbia, South Carolina native is no stranger to TMZ headlines. There’s his known fondness for controlled substances. Though the tight-lipped PGA Tour won't disclose it for some reason, Golf Magazine has reported that Johnson has tested positive for marijuana once and cocaine twice.

There’s been speculation that Johnson was suspended for six months for drugs last summer, but the PGA, often operating with the secrecy of Yale's Skull and Bones, announced that he was taking a "leave of absence." Although Johnson has publicly denied he has a drug problem, he has admitted to troubles with binge drinking. Indeed, there have been many bar sightings of him near his home in Jupiter, Florida.

Johnson’s reputation as a "player" on and off the links is well-established. Respected Fox Sports reporter Robert Lusetich tweeted that Johnson was known to have slept with two players’ wives, and that one broke up a marriage. Besides often behaving like an overgrown frat boy, Johnson has also acquired that dreaded reputation as a "choker" on the back nine of big tournaments. His worst collapse came in the 2010 PGA Championship, where he illegally grounded his club in a bunker on the final hole of the tournament. Johnson had taken a one-shot lead before teeing up on the 18th that day and things were looking good, but the resulting two-stroke penalty gave the win to Martin Kaymer. Golf fans and commentators started putting him in that category of great golfers who may never win a major.

Johnson carried a lot of baggage into this year's U.S. Open Championship, while the untarnished new superstar Spieth flew in as light as a businessman on a commuter flight. Golf's bad boy had made changes though since his "leave"—bringing in advisers to help him manage the pressures of competition, and recently having a son with his fiancée, hockey great Wayne Gretzky's daughter Paulina. The lush life seemed to be a thing of the past.

All he had to do when all eyes had turned to him at The Open was sink the ball in two strokes, an almost automatic task for a pro. You just lag it short of the hole and tap it in, like Spieth had done a few minutes before. What he did, however, was roll the ball four feet past the hole. A four-foot putt is not automatic, especially with greens conditions that had been compared to "broccoli." He missed it.

Dustin Johnson's collapse at the 2015 U.S. Open is now being called one of the greatest chokes in golf history—even sports history. This one won't go away fast. Johnson had a chance for a fresh start here, less than a year after he was forced to step away from his livelihood, but the pressure got to him.

Now the "choke artist" whispers are growing louder, and it has to be in his head. Johnson's foil, on that day, Spieth, picked up his second straight major, but his whispers will be of another sort. They’ll be all about his winning the Grand Slam—all four majors in a single calendar year. Not even Tiger Woods has done this. Spieth is only 21 but nobody will ever call him a choke artist now, although it could’ve happened after he'd blown his lead on hole 17 with a double bogey. That's a big burden to remove at a young age for a golfer. Dustin Johnson will just have to shake it off. Get a case of amnesia.