O’s Steve Pearce Is Running Out of Time 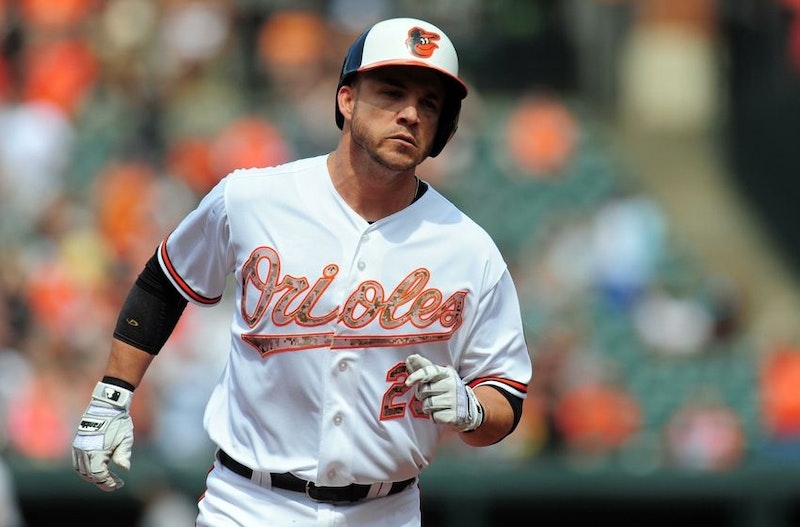 The Orioles put a historical thumping on the Phillies on Tuesday night. Baltimore launched a club record eight home runs in the 13-3 drubbing of their contrived Interleague “rival.” The O’s offense was sparked by Manny Machado and the recently-recalled Chris Parmalee. Watching Parmalee hit a pair of home runs in his O’s debut had to be bittersweet for new teammate Steve Pearce.

Now Pearce appears as though he’s beyond his expiration date. After two months of struggling, and a brief injury-necessitated position change to second base, Pearce is on borrowed time in Baltimore. O’s skipper Buck Showalter has given the 32-year-old every opportunity to re-kindle the 2014 magic, but to no avail. With his team in the thick of the AL East race, a stable of interchangeable outfielders, and several players set to return from the disabled list Showalter may soon have no choice but to show Pearce the door.

Pearce became a fan favorite and dependable power bat during last summer’s run to the playoffs. Through 46 games this season the veteran is hitting just .210 with a .643 OPS. Pearce’s power production has nose-dived with a decline in slugging percentage from .556 in 2014 to .362 this season. His struggles have prompted O’s GM Dan Duquette to turn to other reclamation projects like Nolan Reimold and Parmalee.

The Orioles will have to move an outfielder off the roster at some point in the next week or so. Reimold, Pearce, and Delmon Young are all right-handed hitters and there’s really only room for two of them. Young has been the most productive of the bunch and Reimold offers superior defense and base-running, making Pearce the likely odd man out. The Orioles also have prospect Dariel Alvarez, another right-handed hitting outfielder, making some noise at Triple-A Norfolk. Alvarez had a slow start to the season but he’s been hot in June and is hitting .271 with nine home runs.

Pearce’s versatility—he can play all over the diamond—could be his saving grace, at least in the short term. But even if he stays on the roster to effectively serve as a reserve infielder for the next few weeks it’s hard to see him still on the team after Jonathan Schoop returns from the disabled list. Schoop is expected to be back before the All Star Game to reclaim his starting job at second base. The All Star break may provide an extended vacation to the struggling Pearce.