Jacoby Ellsbury is Dead to Me

Boston ought to swap the lackadaisical outfielder, a guy who won't even stay with his teammates while injured. 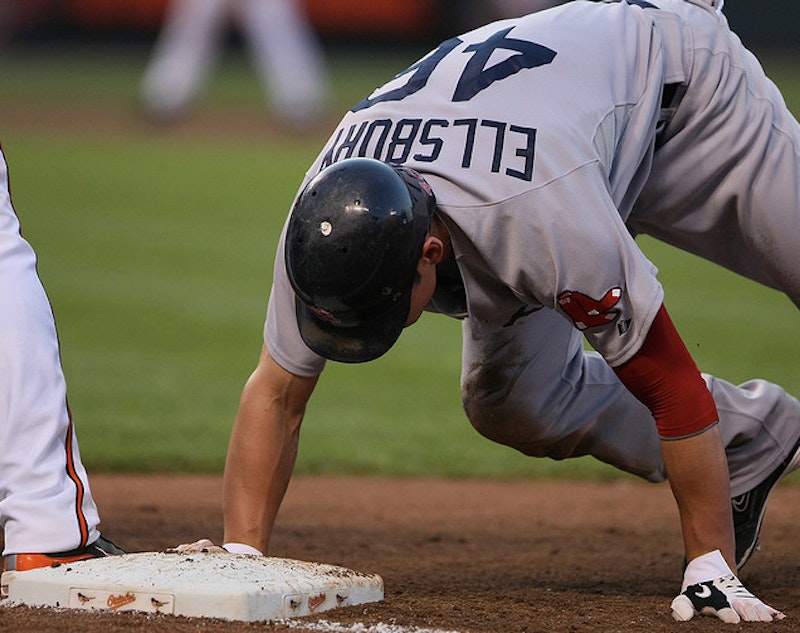 The Boston Red Sox are in a pickle this year. Eight of their key players have spent a significant amount of time on the disabled list (it’s nearly dumbfounding that J.D. Drew isn’t one of them) but the team remains a contender for the wild card. Barely. Manny Delcarmen is back in the bullpen (for better or worse), Clay Buchholz returned on July 21 and Josh Beckett is starting tomorrow night’s game in Seattle. However, outfielder Jacoby Ellsbury is nowhere to be found. Sure, he cracked four ribs, and normally I would sympathize with whomever had that affliction, but I’m not normally talking to a professional baseball player. Ellsbury’s job is to get banged up and play through pain. Red Sox principal owner John Henry is not paying him $496,500 to get massages and relax in Fort Meyers or a rehab center in Arizona. I’m a Sox fan, and for a couple of years Ellsbury—who swiped 70 bags last year, leading the bigs—was one of my three favorite players.  No longer.

While Ellsbury’s working prodigiously on his tan lines, Dustin Pedroia is hobbling through the infield to take ground balls. Sox general manager Theo Epstein values loyalty from his players, which apparently Ellsbury doesn’t have, considering his unwillingness to sign an extension (no doubt influenced by agent Scott Boras). There’s really only one solution in dealing with the pretty boy, and that’s trading him.

Currently, Ellsbury’s trade value is relatively low (languishing on the DL since the Stone Age will do that to you), but with a productive month at the end of the season he could be one of the more sought after outfielders during the hot stove months. (Then again, perhaps the market for wimps isn’t strong.) The Dodgers’ Matt Kemp has had a disappointing year so far in Los Angeles and, even though GM Ned Colletti has denied it, there are rumors about a possible change of scenery for the young center fielder. A simple swap of the players, in my opinion, wouldn’t entice the Dodgers enough to pull the trigger. Prospects would have to be added to sweeten the package, since Kemp has more upside than Ellsbury. Colletti is in desperate need of pitching, so maybe Michael Bowden or Felix Doubrant would help work out an arrangement.

There’s always the possibility of Mike Cameron remaining as Boston’s starting center fielder next year. This would necessitate Epstein nabbing either Carl Crawford or Jayson Werth this winter to take over in left field. How does DLsbury fit into this? Well, the Red Sox could potentially pitch him in a three-team deal that would bring a slugging corner infielder to Boston, or possibly an above average catcher. There are countless scenarios and landing spots for the crybaby, ahem, baseball player. I don’t really care where he’s exiled to; I just want to see Jacoby Ellsbury in another team’s uniform next year.