The country's best young baseball writer talks shop at the beginning of the '08 season. 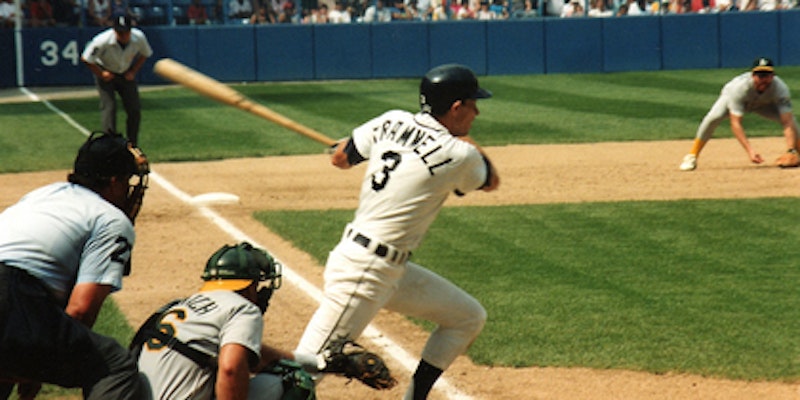 Tim Marchman, 29, is the country’s best baseball columnist that you might never have heard of. He grew up in Queens and Brooklyn, and now writes for The New York Sun, an influential if small circulation daily in Manhattan that started in 2002. Marchman’s written for The Weekly Standard, The New Republic, The Los Angeles Times and The National Review, as well as a stint as managing editor of the weekly New York Press, but it’s his iconoclastic views about the day-in, day-out grind of baseball that is cementing his reputation. In the event The New Yorker’s Roger Angell ever retires, not a sure bet even at 79, Marchman is his natural successor at that magazine. Last week, Splice asked Marchman a number of questions as the MLB season began.


Splice Today: What's your memory of your first MLB game? Mine was in '62, seeing the Mets vs. the Giants at the old Polo Grounds (before Shea), as a birthday present from my dad when I turned seven.

Tim Marchman: Mine was June 20, 1987. My grandfather took me bowling at Van Wyck Lanes and then we went to see Dwight Gooden start against the Phillies. Gooden gave up two runs in nine innings, and Lenny Dykstra scored the winning run in the bottom of the ninth. I am convinced that this day featured the most perfect, cloudless sky in the history of New York.

ST: Do you find the idea of Wrigley Field being re-named, say, Starbucks Park or IKEA Field as appalling as I suspect you would? I recall a column of yours about this subject concerning the Mets playing at Citi Field [opening in 2009].

TM: Appalling wouldn't quite be the word. In the specific case I'd object mainly because renaming [Wrigley] would require physically defacing a national landmark, and also because of the inane pointlessness of the whole project—no matter what anyone pays and no matter how many times announcers were forced to stutter over the new name, no one would ever call it anything but Wrigley Field.

In the abstract I'm not opposed to corporations buying naming rights, especially as the original naming of Wrigley Field was itself an exercise in corporate branding, but the end effect is invariably so tawdry and undignified that ball clubs would just be better off naming their parks after esteemed citizens, natural features of the local landscape, etc.

ST: If you didn't cover baseball as a living, whom would you root for? And is it possible for a sportswriter, as many claim, to be completely neutral once you've made the switch from fan to professional?

TM: If you buy into the ideal of an unbiased press I suppose it's possible, but I'm not sure I understand what the purpose or necessity of a neutral sportswriter would be. Why anyone would want to force this conflation of fairness, objectivity and accuracy with neutrality on baseball writers, I'm not quite sure.

I have no more problem admitting that I have the same bias that anyone else who grew up in Queens rooting for Keith Hernandez has than I would have telling readers whom I voted for if I were a political columnist. I'm not too keen on valuing the outward signifiers of objectivity over the actual thing, which is to describe what you see and hear, and what you think it means.

ST: What team will fare better in '08: the Pirates or Orioles?

TM: Pittsburgh, but with two caveats. The first is that Baltimore's record will probably be more impressive given that they're playing three dozen games against Boston and New York, and the second is that under Andy MacPhail Baltimore seems to be actually building a real team, even if they'll be awful this year. Nick Markakis and Adam Jones are two pretty good players to have around.

ST: Predictions for division winners, wild cards, and who plays in the Series?

Boston, Detroit, and Los Angeles in the American League, and New York for the wild card; New York, Chicago, and Arizona in the National League, with Atlanta for the wild card. Boston and Chicago will win the pennants. (I have predicted this before and it obviously will never happen because it would cause a black hole or something.)

Boston will win in a comeback in Game Seven at Wrigley Field, inducing a great wail that will whip over Lake Michigan, gain accumulated physical force, and wipe out Milwaukee as it travels north.

TM: I don't care for Schilling's political preening, and he's a bit of a self-promoter, but I think writing up 10,000 word blog entries and posting at Red Sox message boards is a window on the future, and I'm glad he's doing it. If every player was as much of a baseball dork as Schilling patently is, and as willing to reach right past the press and go to the fans directly, the game would be a hell of a lot better for it.

Rodriguez seems to me to be basically a child prodigy who's grown into manhood showing every sign of having the same problems child prodigies often have, maybe made worse by all the money. I have no problem with a guy in his position who collects art and openly talks about getting help for his psychological problems, and I think if you compare him to some other athletes it's easy to see how he could have developed in a much worse direction. He's interesting for sure, maybe mainly because he's so uninteresting, but I don't find him really obnoxious at all.

LaRussa is well beyond obnoxious. His lack of contrition for falling asleep while driving because he was drunk is fucking appalling. As far as I'm concerned, that's no different than spraying a machine gun into a crowd of random people and then saying you don't see what the problem was because after all no one got hit. That he then tried to bully St. Louis reporters into not asking hard questions after one of his players killed himself driving drunk is absolutely beyond belief. If you can explain to me why Barry Bonds and Roger Clemens are villains while this guy is considered respectable, I'd absolutely love to hear it.

ST: What player has been most egregiously snubbed by Hall of Fame voters?

TM: Probably Alan Trammell. There's really not very much difference between Trammell and Derek Jeter. Ron Santo was a truly great player and should have been elected decades ago, but at least there's a fairly widespread recognition that his case has been an epic botch and that he's a clear Hall of Famer. People write me cockeyed emails whenever I point out how good Trammell was, and the guy can't crack 20 percent in voting. Bert Blyleven also deserves to get in, but I can't get too worked up about it, as the dumb snubbing is probably the most interesting thing about his career, so it actually works to his advantage in keeping his name alive.

TM: 19-6, 2.64 ERA. (Numbers pulled out of thin air.) I like Santana, and C.C. Sabathia for the repeat, with Brandon Webb and Justin Verlander for runners-up.

ST: Will the de facto (for now) recession hamper MLB revenues in '08? And if so, do you think fans will cut down on games attended, spend less at concession stands or buy cheaper tickets?

TM: MLB really dodged a bullet in the timing of this meltdown, in that more or less all the new ballparks that are going to be built have already been built. These things are often financed with municipal bonds, and the market for those looks like Chernobyl right now. Baseball was able to use all the cheap credit to build its new parks on the public dime and get it done before the money dried up.

I don't think the recession generally will have all that much effect on revenue. I do think the financial crisis could. A lot of revenue, for instance, comes in from luxury boxes held by corporations, which can use them to entertain clients and write off the expense. Some corporations might find it quite wise to get rid of such frivolous but decadent and symbolically freighted expenditures right now, and some politicians might find it quite wise to make a great show of responding to public revulsion by trimming what amount to public subsidies for gladiatorial entertainments. (This isn't at all likely.)

ST: As a spectator, and sportswriter, what play do you find more exciting: a double steal, inside the park homer, an outfielder catching a ball over the wall or a brushback pitch?

TM: Definitely the inside the park home run, especially because with modern park dimensions and the power game it's rare enough to see a triple and the inside the park shot is always wild, with crazy relay throws, the third base coach windmilling his arm, outfielders standing around looking lost and woeful, the runner cutting the bags, and the catcher trying to figure out the angles. Action all over the field. My single favorite play is without question the eephus pitch.

ST: Twenty-five years from now, will today's younger fans look back at the early part of the 21st century as baseball's "golden age"?

TM: Probably. By modern standards, baseball kind of sucked in the 1940s—the game was racially segregated, the parks were empty during day games, teenagers and guys missing limbs could make major league teams, and most people never actually saw any games because all the teams were concentrated in a few teams in the Northeast and the Upper Midwest—and it's still held up as a golden age basically because writers who were young then decided to portray it that way. I have a pretty hard time believing that in 2033 nitwits are still going to be agonizing over drug use when they could be talking about how awesome Greg Maddux and David Wright were.

ST: What percent of MLB players do you think know who Enos Slaughter is?

TM: I'd be more interested to know what percent of baseball writers know who Enos Slaughter is. One thing to keep in mind is that a hell of a lot of ballplayers are essentially seasonal workers in a foreign country, and there's no more reason to expect them to know about the history of the game here than there would be to expect Ryan Zimmerman to know who was the best Dominican shortstop in the 1940s, or to expect Jake Peavy to know who the best Japanese starters in the 1960s were. Baseball writers have no such excuses.

ST: As a kid did you collect baseball cards and, if so, did you bring a pile of them to school and trade them and play games (up against the wall, colors, etc.) with your buddies? Or is that a tradition that was before your time?

TM: I was a madman for baseball cards and while by the time I was into them there was too much collector trade in them for people to play games at school, my mom and I would play flipsies with scrub players.

ST: You interview players and managers professionally. Who would you most like to spend time with at a restaurant, conversing about anything but baseball?

TM: Probably Dusty Baker. I don't care for the way he runs a team, but he's interested in interesting things and shows every sign of being a well-rounded and complete person who could give me some really useful advice on how to live well.