A reflection on the pain of sports relevance. 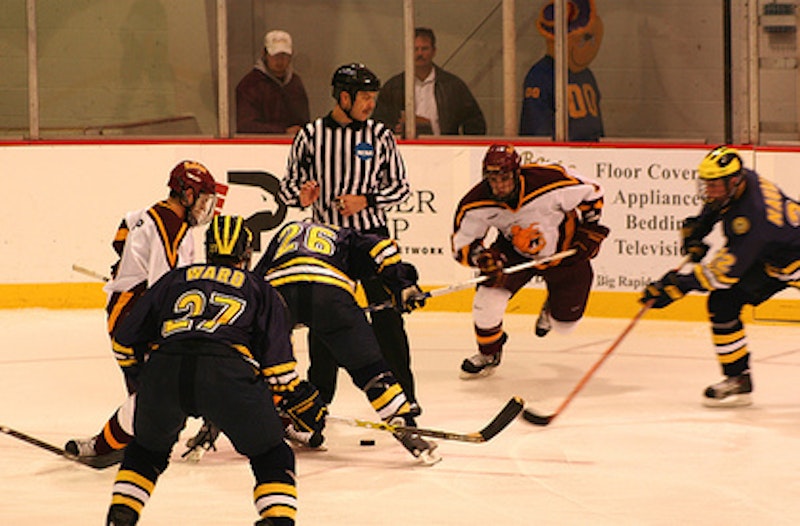 I traveled 2,473 miles, bummed two car rides, took four planes, and had a five-hour bus ride. I swung a place to stay through a bit of slightly awkward Facebook messaging with a friend I hadn’t spoken to in nearly two years. Spent the night in an airport that had immovable armrests between every chair, forcing me to sleep on the floor. And—in return for my commitment —we lost.

Last Thursday night, while you might’ve been watching The Office or getting your pre-game on, I was at the Pepsi Center in Denver watching a hockey game between the University of Notre Dame Fighting Irish and my University of Michigan Wolverines.

It’s doubtful you were aware the game existed, aside from maybe noticing it on ESPN2, and I’m almost positive that you didn’t care about the outcome. Hockey is an odd sport with influence only in a small, un-influential part of the country. Americans just don’t care about what people in Minnesota, North Dakota, or the entire nation of Canada do with their time. We’re used to seeing California and New York stand in as surrogate Americas. Texas is America. So is Missouri. Even Alabama is America.

We get NASCAR: it’s for rednecks and rednecks are American. It doesn’t matter whether or not the stereotypes are true—I’m not a redneck but enjoy NASCAR—but hockey is the sport for gentle Canadians with their socialized medicine and goofy way of saying “about.” Hailing from Maryland, I barely knew hockey existed until going to school in Michigan. I always assumed it was for kids who were too white and un-athletic to star in normal sports.

This is no attempt to preach the gospel of hockey. It sucks on TV, the stats are kind of irrelevant, and luck plays way, way too much of a factor when compared to sports like baseball, basketball and football. I love hockey simply because I love Michigan hockey. I know every player’s first name (including bench players). I’ve led the cheers at Yost Ice Arena, and in an act of sheer devotion, traveled from Ann Arbor to Denver to watch the Wolverines play in the NCAA tournament semi-finals, known as the Frozen Four.

It shouldn’t have happened the way it did. We were the number one team in the country. Michigan was playing Notre Dame, a team we’d already beaten twice and the lowest-ranked squad invited to the tournament. After four years of watching Michigan teams break my heart, this one really had a shot. We were the favorites—and promptly fell behind 3-0 in the first period—a virtually insurmountable lead. However, the team mounted a glorious comeback, eventually tying the game at 4-4 before losing in overtime. Despite the pain, it was still the best hockey game I’ve ever seen.

Here’s the thing: you don’t feel bad for me. Over four years at Michigan, I’ve experienced some of the most haunting all-time Michigan losses in person. I was there for three consecutive close losses to Ohio State, the Appalachian State game, blowing a 3-0 lead in the 2005 hockey playoffs, and countless choke jobs and last second heartbreakers. We’re Michigan. We’re supposed to win every game, and more often than not, we do—except we never quite make it all the way. We win enough to be despised, but never enough to feel satisfied.

Do you hear that? It’s the sound of 16,000 fans cheering against you in neutral Denver—fans from schools across the country like North Dakota and Boston College alongside a handful of actual Notre Dame partisans. It’s hearing “Appalachian State” shouted at you anytime you wear a Michigan hat. Wait, can you hear that? It’s silence. We can’t say anything back. The silence from 110,000 Michigan fans after the Appalachian State game goes on to this day. Yes, the school’s SAT scores are high and our football team is the most victorious, but no, we did not beat Appalachian State. Our pain is an odd one: it’s the pain of relevance.

The other team that continually breaks my heart is the Baltimore Orioles, whose struggles have already been chronicled by fellow Splice writer Pete Backof. No one really cares about the O’s. It’s a rare type that still follows the team. When we’re bad—which is always—we show up on the national spotlight every now and then, pretty much only when we play the Yankees or the Red Sox. Other teams’ fans don’t have any opinion about us. We just kind of quietly suck.

It’s the ultimate sports question, one that we rarely ever think about: do we want our teams to suffer quietly in irrelevance or fail in the face of hatred and recognition? When the Orioles lose, I don’t have to hear about it. When Michigan lost to Appalachian State, I had to watch the highlights for three straight days and constantly throughout the season. It’s the difference between dating a girl with no personality and dating an interesting, beautiful girl who constantly starts embarrassing fights in public. Dating a girl with no personality will slowly crush your soul, but the fighting girl rips your heart every now and then; plus, everyone gives you shit.

The way I see it, your personal preference for sports pain all comes down to ego. Those of you blessed with modesty can take solace in the privacy of an irrelevant team’s disaster. Or maybe you’re an optimist and can take pride in being a boutique fan, a member of a dying breed. I certainly try to tell myself this whenever I have to watch Yankee and Red Sox fans invade my baseball stadium.

But this writer has no shortage of ego. The thing about dating the pretty girl is everyone still has to respect you for it. We Michigan fans love the attention. It sucks, but we can’t help it. We consider ourselves to be one of the most prominent schools in the country and listening to ESPN harp on our losses reinforces that belief. It would be much scarier if they said nothing at all.

When Michigan breaks my heart, I don’t walk away with my head down. Instead, I get quiet and stare down every opposing fan. Because while they may have won that battle, I know we’ll win the war. Four years of being a Michigan fan have probably taken 20 off of my life. The pessimism gets ingrained in you. But somehow, so does the pleasant arrogance. You begin to take pleasure in that delightful hatred and booing, the kind that only comes with the recognition of success.

When we lost to Notre Dame, my eyes welled up with tears. It was my last Michigan sporting event as a student. I had to watch the team skate off the ice in shocking defeat as the crowd raged around us. I had to decide what to do with the rest of my time in Denver. After the final goal was notched, we stayed in the stands, holding each other, comforting each other, singing the fight song. We cheered loudly for our beloved team as they left, understanding that their hearts were just as broken as ours. I’m glad I witnessed it in person.

Your team may never win a championship. There’s nothing you can do as a spectator, and there’s something oddly comforting and powerful about that. So you just try to be a good fan and pray it pays off. After the game, my friend started talking to a guy in North Dakota jersey. He said something that actually brought a smile to my buddy’s face, “We hate you guys, but you’re really loud. You’re great fans.” And that’s the best achievement a sports lover can ever have.