Kansas in the Clutch

Junior guard Mario Chalmers hit a game tying shot to send the national championship into overtime, and the Kansas Jayhawks rolled to victory from there. From The University Daily Kansan. 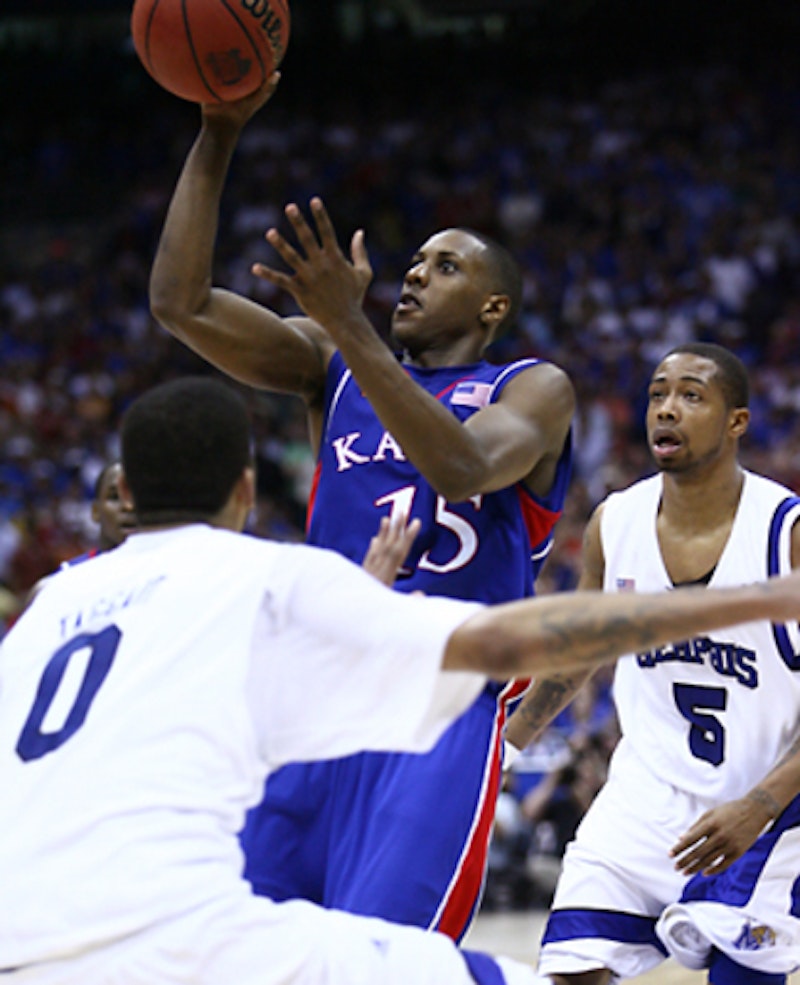 That’s right - national championship. Kansas (37-3) beat Memphis (38-2) 75-68 in overtime on Monday night at the Alamodome, winning its first title since 1988 and third in program history after coming back from a late nine-point deficit.

“God, we competed hard,” Kansas coach Bill Self said. “It’s one thing to win. It’s another thing to win the way these guys did.”

Chalmers’ celebratory dance moves seemed so natural, just like the shot he made about 30 minutes earlier that sent the game to overtime. The play started with Sherron Collins. He had 10 seconds to make sure Kansas extended the game and kept its dream season alive. He dribbled to the right wing behind the three-point line and nearly lost the ball.

Then, Chalmers separated from his man for just long enough. Collins found him. Trailing 63-60, Chalmers shot a three near the top of the key. Overtime.

The game should’ve been finished long before that play. The Jayhawks got a gift from the Tigers when they missed five of six free throws that would’ve iced the game. They didn’t waste the good fortune in overtime. The extra period was all Kansas.

Brandon Rush started out with a layup. Chalmers and Darrell Arthur combined for an alley-oop. When Collins made two free throws to put Kansas up 75-68, the game was finished. Chalmers’ shot had sparked all of it.

“I just knew we had the game after that,” Arthur said.

A happy ending seemed implausible late in the second half. Memphis’ Derrick Rose nearly killed Kansas. He was ready to put himself at the top of the list of Jayhawk Final Four villains right up there with Carmelo Anthony, Juan Dixon and Grant Hill. With Memphis down 45-42 midway in the second half, Rose scored 12 straight points for Memphis. He couldn’t miss if he tried. Really. Rose fired a long off-balance jumper at the end of the shot clock and banked it in. The basket gave Memphis a 56-49 lead with 4:10 left.

The Tigers stretched that lead to 60-51, and it looked like Memphis would cut down the nets.

“A lot of guys thought the game was over,” Darnell Jackson said, “but we just kept saying believe.”

Mario Chalmers could dance now, now that his name had been permanently etched into the Kansas basketball history books.

He moved his hips to “Celebrate” and slapped hands all around with his teammates in the confetti-filled jubilation of their national championship.

Self said those exact words to his team. Chalmers used Self’s message and the memories from last season’s comeback victories against Texas to motivate him.

Arthur took the inspirational words to heart as well. It was no surprise to see Chalmers take over in the clutch. Arthur was more of an unexpected hero.

Kansas has known all season it plays superior ball when Arthur is active. Problem was, that didn’t happen too often.

In the tournament, Arthur’s inconsistency got even worse. The one they call Shady reverted to his mind-bogglingly inconsistent ways throughout the postseason, disappearing in every game.

Monday night he was a changed man. Arthur scored two big baskets toward the end of regulation and got another one in overtime. He finished with 20 points. Arthur had played his best game in the biggest game of his life.

It’s something he’ll never forget, something all of the Jayhawks will never forget. They battled through adversity after two losses in three games in late February and didn’t lose the rest of the way.

Now, they’re champions. They’ll go down as one of the best teams in Kansas history. It’s something Russell Robinson has hoped for since the season started.

After all the dancing, high-fiving and screaming stopped, Robinson sat in the back of a golf cart with his head in his arms and a net around his neck, thinking about the accomplishment.