Baltimore baseball fans are prepared for mediocrity in 2014. 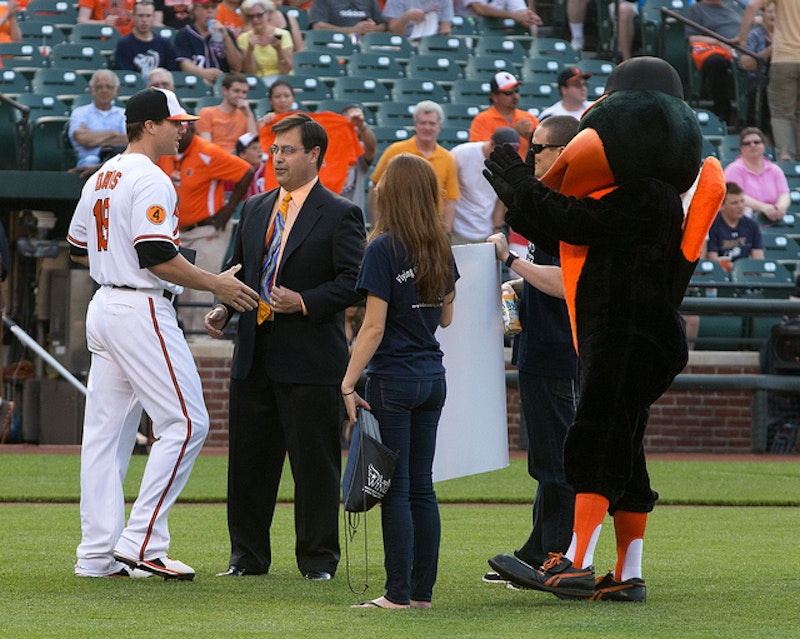 The Baltimore Orioles’ organization received a national beatdown last week when Jonah Keri of Grantland.com wrote in depth about the team’s benign offseason, checkered on-field history, and the whereabouts of all that MASN money. Keri’s revelations weren’t surprising to any Baltimore sports diehard but they certainly painted an ugly picture when thoroughly detailed. Orioles’ fans are accustomed to ugly pictures.

The O’s still have a chance to save an offseason that has to rank among the most disappointing in baseball. Ervin Santana, Ubaldo Jimenez, Kendrys Morales, A.J. Burnett, and Nelson Cruz remain on the free agent market as the start of Spring Training approaches. After whiffing on the likes of Grant Balfour, Fernando Rodney, and Bronson Arroyo there’s little reason to think that the Orioles will land any of the aforementioned free agents.

Why? In short, the Orioles are cheap. The club belongs to Peter Angelos and he’s allowed to run it any way he sees fit. Profit has long trumped on-field performance as the O’s ultimate measuring stick. Just because Chris Davis burst on the scene, Manny Machado looks like the reincarnation of Brooks Robinson, and Chris Tillman finally morphed into a frontline starter doesn’t mean that Angelos is going to alter the management philosophy that’s gotten him this far. Angelos, not the Orioles, are the prime beneficiaries of the MASN deal.

I’m as guilty of bitching about the Orioles’ unwillingness to spend, their artificially restricted payrolls, and moratorium on long-term deals for pitchers, but where has it gotten me? Where has it gotten you? Sure, it’s fun to blow off some steam with friends, and the O’s and Angelos are convenient punching bags, but ultimately all the wailing is about as meaningful as a Dan Duquette minor league signing.

Duquette is in a tough spot with the Orioles. He has a pretty solid roster with several young stars, acquired almost exclusively by his predecessor, and apparently no power to augment the team or proactively work to keep the team intact. My seven-year-old son excitedly sported his new Chris Davis t-shirt as we ran errands on Saturday. Instead of being pleased that I was passing on my love of the O’s to my kids all I could think of was how much it’s going to suck when Davis is playing for the Red Sox in two years.

It’s coming folks. It may not be Boston but Davis is as good as gone. As a Scott Boras client, Davis, and Matt Wieters too, is destined to test the free agent market. If he posts numbers anywhere close to what he’s done over the past two seasons Boras will no doubt trumpet Davis as the sport’s next $200 million player and someone will take the bait. The largest contract in Orioles history is the six-year $85.5 million extension that Adam Jones signed in the summer of 2012. There’s no chance that this organization is signing Davis to a contract that will guarantee him more than double the money that was guaranteed to Jones. It’s a matter of choice and the Orioles, through words and inaction, have made it clear that they have no intention of operating at the top end of baseball’s financial stratosphere.

Duquette’s stuck in the middle. He’s a smart and seasoned baseball man with clear marching orders; keep the payroll down while fielding as competitive a team as possible while Angelos and the Nationals work out a new MASN deal. Duquette has spoken openly about his plans to build the Orioles through the player development system and avoid costly forays into the free agent pool. Drafting and signing talented players and developing them into viable Major Leaguers is really the only way to build a sustainable competitor, but failing to address the team’s weaknesses after two seasons of contention borders on incompetence. Duquette isn’t stupid or incompetent. which means he’s simply following orders.

The Orioles have been linked to Santana, Burnett and Korean hurler Suk-Min Yoon. Burnett is likely to prefer a return trip to the National League to pitch for Pirates or Phillies rather than spend his last few seasons taking regular beatings in the AL East. Santana is almost assuredly seeking a deal in excess of three years, a no-no in recent Orioles’ history. Yoon is a Korean right-hander coming off an injury-marred season. Who do you think Duquette will sign?

The signing of Yoon is seemingly inevitable and will rightfully be met with a collective groan around Baltimore. After more than a decade of irrelevance the Orioles are achingly close to being a true contender. Sadly, we’re all stuck in the middle with Duquette.