An Open Letter to A.J. Burnett 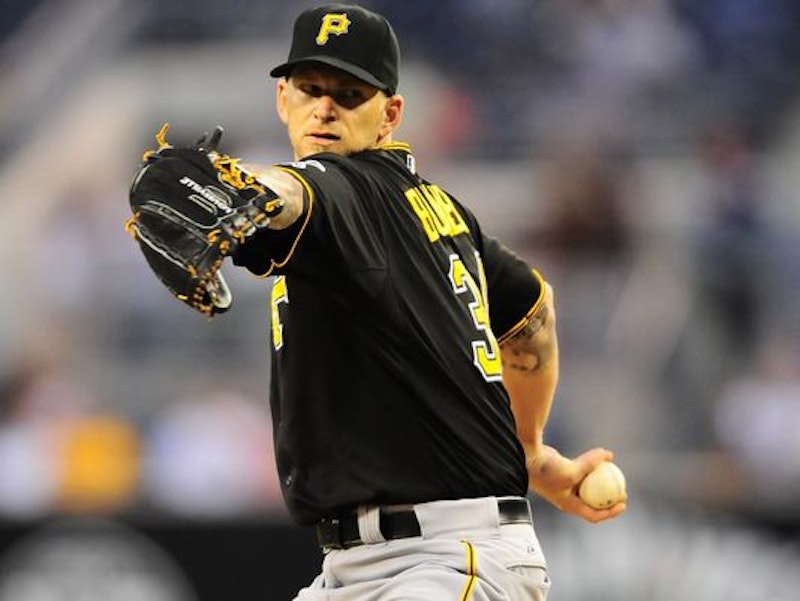 Don’t be like those Arkansas ballplayers that came before you. Your recluse types like Kevin McReynolds and Jeff King, or David Carter “Mutt” Williams who pitched for the Washington Senators back in 1913 or even Ellis Valentine who had a strong arm but struggled with addiction. Don’t go out with some whimper like they did. Be a man and ride your quad back into Pittsburgh where you have unfinished business.

At 37, you have the strong arm of Valentine and you can eat up innings, work up the fans, and keep the clubhouse redlined with the right mixture of zany intensity. You can make new inspirational t-shirts, go out to McKees Rocks and get an additional tattoo to commemorate your final season.

Of the options supposedly open to you and your agent Darek Braunecker, you would be foolish to select the closest one to your home in Monkton, Md. Yes, Camden Yards and Buck Showalter’s overly-organized sock drawer are only 39 minutes from your house. Also at the end of that short commute are the rest of the American League East and these creatures called Designated Hitters. You have already been down that path in the Bronx and I don’t think you want to repeat that experience, do you? And how embarrassing to be running into your neighbor/employer Peter Angelos at the local liquor store after a Friday night drubbing by the Blue Jays?

The next closest commute from Monkton, as you probably know, is Bryce Harper’s Baseball Academy in Washington, D.C. MapQuest says it is an hour and 26 minutes from your castle, but Bryce could reduce that to about 82 minutes given his pace. Is it really worth it to try to have some caveman competition with Jayson Werth for the clubhouse filled with Alpha Males (not including Ross Ohlendorf)? I think not.

That leaves the Phillies, one hour and 57 minutes from your doorstep. Ryne Sandberg in charge now. Chase Utley limping around, Ryan Howard looking for his old swing. You share your agent with Cliff Lee, who has become enigmatic on the mound. Go ahead, then, I dare you. Go to Philly, sign a big deal and get tortured by the media and fans and once-caustic now-bland blogs like “The 700 Level.” If you’re not coming back to Pittsburgh, please take Philly, and enjoy your final season with the Astros of the east coast.

Pittsburgh is a four hour and 23 minute drive from Monkton, which is basically a Red Sox vs. Yankees game in its entirety.

Think back, A.J., to the dozens of standing ovations you received at PNC Park, your quick recovery from eye-socket surgery after the failed Spring Training bunt, your morning jogs around the north shore after notching another W the night before. Recall how you channeled Bob Veale and John Candelaria on your brilliant opening day assignment against the Cubs last season. And you need not be reminded that pitching coach Ray Searage—who could probably get Helen Keller to throw a pretty good splitter within a fortnight of his tutelage—has Edinson Volquez on board as his latest reclamation project. You could help Edinson, maybe even call him Edin for short, and get him to stop nibbling and running up the base on balls for crying out loud. You could also finish your mentoring of Jeff Locke, who with his Greg Brady hairdo decided to take the second half of last season and throw it in the Dumpster behind Mullen’s Bar on Federal St.

Yes, I agree that passing you over for the start of NLDS Game 5 in St. Louis last October was not handled with the greatest aplomb. But you would probably agree it didn’t matter who started that game with the Redbirds starting pitchers on fire the way they were. Let us move on. Carlos Beltran has been extracted from St. Louis. The Reds have been weakened without their hit-by-pitch specialist Choo. Milwaukee has Ryan Braun issues despite some pitching improvements. This could and should be our year to own the NL Central.

In conclusion, I implore you to sign with the Buccos. And as a final note I defer to one of your Japanesey tats with this Japanese proverb passed on to me by a new-agey masseuse who was riding in my taxi last summer: “When passing a mirror, notice the frame.” In 2014, Pirates fans are the frame, Allan James. Get thee back to the ‘Burgh this instant!

Yours respectfully and with high expectations this season as I turn 50, Spike.