Predictions for the MLB Playoffs

It's all about Hamels vs. Jonathan Sanchez. 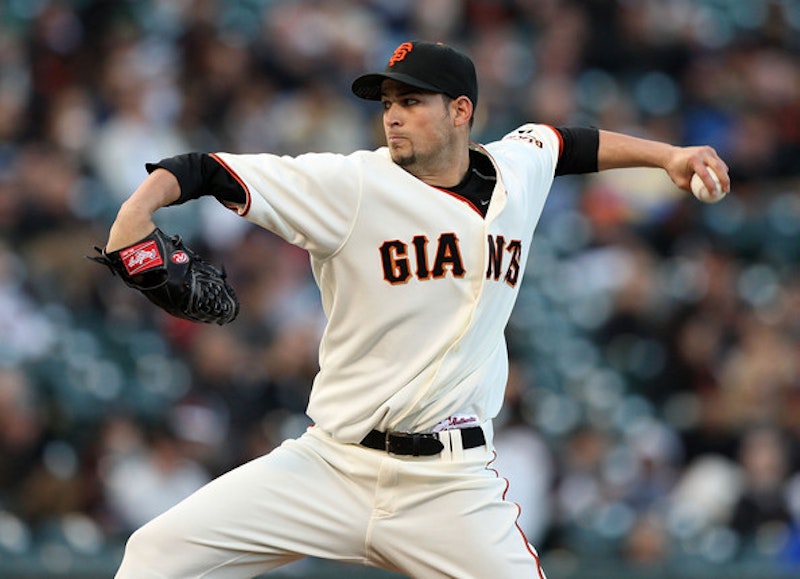 The MLB playoffs began yesterday with a bang. The Rays lost at home with their ace David Price on the hill and Roy Halladay carved up the Reds. If you didn't get a chance to see the Phillies/Reds game you missed a masterpiece by one of the game's greats. After toiling in obscurity for years with the Blue Jays Roy Halladay made his post-season debut by tossing a no-hitter against Cincinnati. It was just the second no-hitter in Major League Playoff history. Halladay's performance has set the bar for staff mates Roy Oswalt and Cole Hamels.

I thought about picking the Giants to upset the Phillies. Like Philadelphia, the Giants feature a “Big 3” of their own. Sadly, Philly's “3” is just better. Both teams have run through the NL like a buzzsaw for the past month. I'll take the Giants over the Braves in four and the Phils over the Reds in a sweep, setting up a clash of exciting pitching matchups in the NLCS. Then, the Phillies in six well-pitched and fairly low-scoring games. The TV networks may not be excited about Hamels vs. Jonathan Sanchez, but the baseball dork in me is already salivating.

Here's my take on each series:

Rays vs. Rangers
The Rangers hold a 1-0 lead in the series as I type this. James Shields faces a must win in game two for Tampa Bay. He's been nicknamed “Big Game” James and he'll have the chance to earn that moniker. But I'll take Texas in 5.

Key Players:
Rays: Shields—Price laid an egg in Game 1. Tampa can't go on the road down 0-2.
Rangers: CJ Wilson—Wilson has logged 204 innings in 2010. His previous career high was 73 in 2009. Texas needs him to be a complement to Cliff Lee. Does Wilson have enough left in the tank?

Yankees vs. Twins
I hate the Yankees, but I'll bet the fans Minnesota hate them more. The Yankees have owned the Twinkies in both the regular season and playoffs over the past few years. It pains me to say it, but after last night’s win, I think the Yankees take it in four.

National League
Reds vs. Phillies
I think Cincy will get steamrolled. They've been a great story and I'd love to see them make a run, but I think they'll get swept.

Key Players
Reds: Scott Rolen—He's provided a veteran presence in the young Reds' lineup. The Phillies won't let Votto beat them so the burden falls to Rolen to knock in some big runs.
Phillies: Brad Lidge—After a disastrous 2009 season Lidge came back to post solid stats in 2010. If he can keep it up and stays away the gopher ball the Phillies could be World Champs.

Giants vs. Braves
As I mentioned earlier I'll take the Giants in four. These teams are moving in opposite directions. The Giants are on fire and the Braves have been frantically doing the doggy paddle since early September.

Key Players
Braves: Derrek Lee—He's performed admirably since his trade from the Cubs. The Braves need his bat to get hot in the middle of the order.
Giants: Buster Posey—He's the presumed NL Rookie of the Year and has quickly developed into the team's cleanup hitter and signal caller for a very impressive pitching staff. If Posey can handle the pressure of his first post season the Giants may just have what it takes to knock off the Phillies.