The unheralded utility player could be a star. 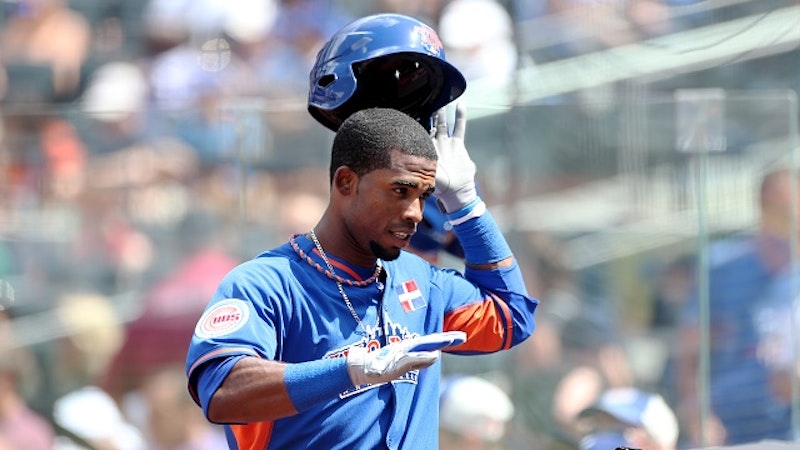 The Chicago Cubs have been stockpiling high impact offensive prospects since the day Theo Epstein left Boston to head up the baseball operations in Wrigleyville. The Cubs have spent each of their past four first round picks on offensive prospects. The recent Jeff Samardzija trade brought back Addison Russell, a Top 10 prospect, from the Oakland A's. The Cubs were represented in last week's All Star game by a pair of 24-year-olds having terrific seasons at the plate. Recent first round picks Kris Bryant and Javier Baez are a modern day Bash Brothers tandem at Triple-A Iowa. Cuban defector Jorge Soler has battled hamstring issues all season but has bashed Double-A pitching over the past three weeks. In a system filled with impact bats sitting on the doorstep of the big leagues it's an unheralded middle infielder from the Dominican Republic that has provided a glimmer of hope at Wrigley Field.

Arismendy Alcantara was recalled from Triple-A Iowa to fill in for a few days when Cubs' second baseman Darwin Barney went on paternity leave. Alcantara responded with a four-hit/three RBI game in his second start and homered in his fifth. By starting games at second base and center field Alcantara has already exhibited the type of flexibility that figures to make him a valuable part of the Cubs' future. Alcantara played shortstop for the majority of his minor league career but shifted to second last season to make room for the more heralded Baez. Alcantara added to his resume this season by starting 11 games in center field for the Iowa Cubs.

Alcantara signed with the Cubs as a 16-year-old free agent out of Santo Domingo in the summer of 2008. He was overshadowed at Iowa by the presence of Baez and the midseason arrival of 2013 first round pick Kris Bryant. While Baez and Bryant put on a power display that had Cubs fans salivating at the thought of balls flying on to Waveland Ave., Alcantara quietly earned a trip to the Major Leagues by posting a .890 OPS and slugging 46 extra base hits in 89 games for Iowa.

Darwin Barney is back from his brief maternity leave, Bryant and Baez are still crushing balls at Triple-A, Soler is terrorizing the Southern League, and 2014 first rounder Kyle Schwarber has already advanced to High Class-A Daytona, but Alcantara is a Chicago Cub. The rest of Chicago's top prospects will likely have to wait until 2015 to make their Wrigley debuts as Alcantara settles alongside Anthony Rizzo and Starlin Castro in the Chicago lineup. The biggest question may be what position he ultimately occupies.