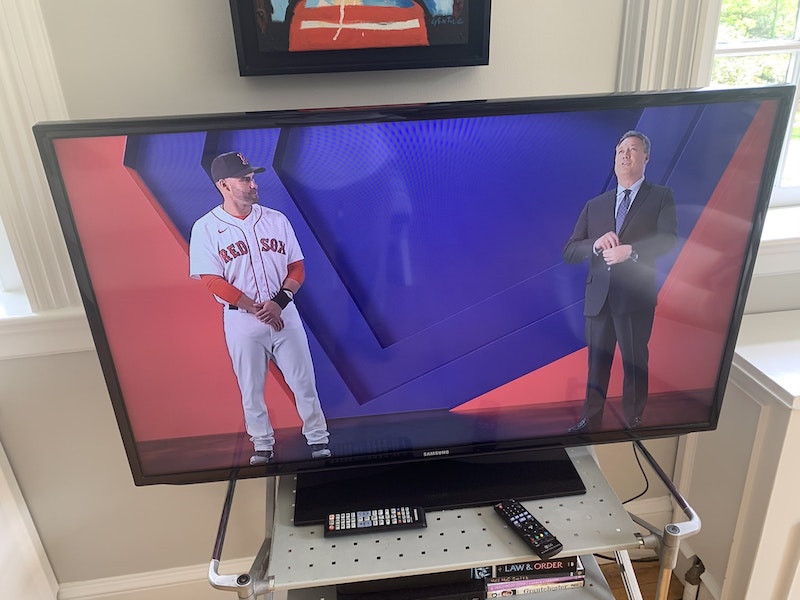 Since Major League Baseball has returned to its 162-game schedule—as opposed to the bizarre 60-game season last year—it’s fair game for devoted fans like myself, who get anxious an hour before their team (in my case, the Boston Red Sox) takes the field to carp about this or that breach of standards for what was once called “America’s pastime.” (Like the Little League seven-inning doubleheaders and man-on-second during “free baseball.”)

At the end of March every year, 2020 the exception, I steel myself to spend at least an hour on the horn with Comcast to purchase “MLB Extra Innings” (known simply as “the package” in my household), a relatively new TV feature that was unimaginable when I first began following baseball in the early-1960s. (Living on Long Island, with eight stations available I was lucky compared to most fans: the Yankees and Mets games were televised, as well as NBC’s Game of the Week; and because we lived near the Sound, it was possible to get Red Sox radio broadcasts on my transistor radio. I’ll never forget hearing the sound of Jack Hamilton’s errant pitch hitting Sox star Tony Conigliaro smack in the face on August 18, 1967.)

The MLB “package,” routinely described as “expensive” at around $180 for the season, is in reality a bargain for any serious baseball fan. Consider: for the cost of one game live at a ballpark (taking the routine example of a family of four, who shell out for tickets, perhaps parking, and the exorbitant, and usually crummy, food, beverages and bobbleheads from vendors or concession stands) a viewer has the choice to tuning into every single game on a given day for the entire season. It’s not dissimilar to when people complained about the price of a newspaper—back when newspapers were purchased—when for a quarter, then 50 cents or a buck, you could read for 90 minutes. Best deal in the world.

I live in Baltimore, so don’t have the option of seeing Red Sox games on its TV station (NESN), but with “the package” that’s alleviated. Except for when the Sox play the Orioles, and a “blackout” rule is in effect, and I have to watch MASN’s coverage of the games, which can be excruciating. I do look forward to Jim Palmer’s commentary; he’s smart, tells great stories about baseball decades ago and isn’t an outrageous “homer.” My son Booker, often my wingman, thinks Palmer’s too bitter about missing out on huge free-agent paydays, but I’d guess that’s not uncommon. I’d like to see the pre- and post-game shows of NESN (at least when the Red Sox win), but no complaints here.

This year has brought some changes to MLB Extra Innings, some good, some bad. Now, for example, when the Sox are on the road, I still get the NESN feed, as opposed to the broadcasters of the rival team, who are almost always really bad (though I get a boot out of the Texas Rangers’ crew, which gives off strong religious and cookie-eating vibes). On the other hand, due to some deal with the MLB Network, the commercials are never local (which was always interesting, whether they came from retailers in Boston, Houston, Seattle, New York or Tampa Bay, giving a taste of regional cultures, although, as I wrote last week, America is quickly becoming one entity as opposed to 50 discrete locales) but rather very stupid house ads. One that drives me nuts features Sox slugger J.D. Martinez with former Mets pitcher Ron Darling—who’s an excellent broadcaster for the Mets’ SNY team—and the former asks his co-“star” what it was like to win a World Series. (Never mind that Martinez did just that in 2018; or that Darling’s ring came by defeating the Sox in the ’86 Series, the “tie-in,” I suppose from the dopes who produces these spots.) Every other inning you see Martinez and Darling together, or the irritating John Smoltz juggling baseballs, and I try not to lose my mind. Because a mind is a terrible thing to waste, sure is, sure is.

Another defect is that the games are on about a 30-second delay from what’s happening on the field. For example, earlier in the season, I had NESN on, and the White Sox’s fantastic Tim Anderson was at the plate, and I happened to read on Twitter that he hit a leadoff homer. I thought it was a joke, but very shortly Anderson’s hit landed in the bullpen. It’s also annoying when texting about the Sox with my longtime friend Rick, a former neighbor in Tribeca who now spends most of his time at his family house on Martha’s Vineyard. I’ll text, “Think Cordero whiffs?” and he’ll respond, “Pitiful. On three pitches,” while on my screen the count is 0-1.

I’m biased, but I don’t think there are two better “color” guys in baseball than the Sox’s Jerry Remy and Dennis Eckersley (both played for the team for parts of their career). Eckersley, especially, is volcanic, throwing out gems like, “I can feel a three-run Johnson from Devers now, especially with the salad [also-ran reliever from opposing team] is throwing.” Eck cracks himself up, and Remy laughs too. Last week, the Sox won a very ugly game against the lowly Tigers, and play-by-play broadcaster Dave O’Brien said, “Well, it wasn’t a Monet, but Boston wins.” Eck: “Whoa, Dave, you’re dropping a Monet on me!” Remy: “Who the heck is Monet?”

I don’t like O’Brien at all (as a broadcaster; odds are that he’s a good guy in person) because he’s a cookie-cutter, bland, safe and root-root-root-for-the-home-team bore. Nicknamed O’Bloviator because he goes on and on about nothing, O’Brien’s a speaking cliché: “Nothing ever good comes from a leadoff walk,” “He didn’t try to do too much with that pitch,” “You need 27 outs to win,” and “Once again, the groundkeepers have done a marvelous job,” just off the top of my head.

O’Brien’s a company man, though in fairness, was put in an awkward position by having to replace the extremely popular Don Orsillo (now with the Padres), whose rapport with Remy was so obvious that even if the Sox were getting creamed, I didn’t switch the channel, because the two were so funny, making fun of each other, or some goofballs in the stands. When Orsillo was inexplicably canned in August 2015, with, disgracefully, no ownership explanation, it was reported that Remy wept. That wasn’t an uncommon sentiment, as fans knew they’d never again hear Orsillo say, with one strike away from a Sox victory, “And the Fenway Faithful stands as one.” A model of grace—not a given in the broadcasting business—Orsillo kept his own counsel, didn’t publicly complain, and finished out the season. I won’t ever forget the last Boston home game in 2015, when player after player tipped his cap at the broadcast booth.

The Mookie Betts trade was all about money and is still debated. But Orsillo’s dismissal was punitive and petty, far worse in my estimation.