You Can Look But It'll Just Hurt More

Laura Mulvey just didn't get it. 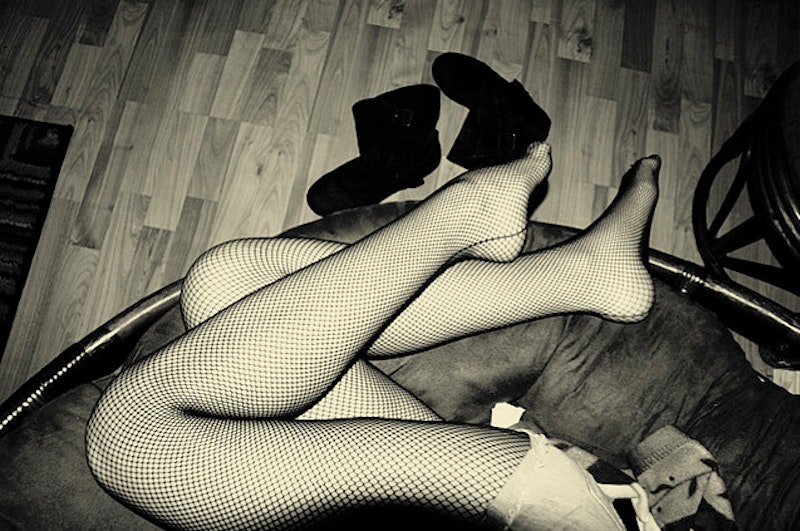 I ran into an acquaintance the other day who’s radioactively hot. I talked to her pleasantly enough for a few minutes while internally my brain bellowed, "Wow! She's radioactively hot!" And I kept responding, "Yes, I know. Shut up, now, please."

Having a low level crush on a marginal acquaintance is not especially stressful at this point in my life. Mostly it's amusing, not least since the attractive woman in question happens to look quite a bit like my wife (I told my wife this, actually. She rolled her eyes. She's good at that, bless her.)

There was an extended period of my life, though, when crushes, low level or otherwise, seemed to define my existence—and not in a good way. I recall one, in particular, during one of my first jobs. I don't even remember this woman's name anymore or even what she looked like. But the affect of the crush stands out among lots (and lots) of similar crushes, I think, because of the space in which it occurred. I had an office off in the corner, and there was a young woman who’d walk across the doorway, innocently ferrying papers, utterly unaware that every time she passed she drove a spike through my eye and into my stupid heart. I was pinned in my seat, watching the movement of a figure who provoked desire, but with whom I could neither interact nor affect. It was like watching a movie.

There's a lot written about movies, desire, and the male gaze. One of the first essays on the topic is Laura Mulvey's 1975 article "Visual Pleasure and Narrative Cinema." Mulvey argues that classic Hollywood cinema positions women as passive objects to be looked at, and men as controlling actors who look. The man's role in the film, Mulvey says, is "the active one of forwarding the story, making things happen." She adds that the man in the story, "controls the film fantasy and also emerges as the representative of power in a further sense: as the bearer of the look of the spectator."

For Mulvey, then, the male position is supposed to be empowering. The one who looks, the one who fantasizes, has control over the objectified, displayed female body. This is not how my crushes felt to me. On the contrary, looking for me—and I think not infrequently for other men—feels incapacitating, even paralyzing. You could argue, I guess, that the difference was that I was not watching a movie; there was no masterful Cary Grant or George Clooney to sweep my object of desire off her feet on my behalf.  I think that the truth, though, is that I felt paralyzed and incapacitated precisely because all those movie stars were there. Their ghostly images flickered across my daydreams—my iconic, romantic hero self, who tripped towards the happy romantic credit fade, rather than just sitting there like some ineffectual creep.

My crushes were painful, then, not because I looked but couldn't have, but rather because looking made demands on me that I couldn't live up to. The issue wasn't sexual release (which even I had figured out you could manage by yourself). The issue was failure.

This is, I think, why men sometimes react with anger when they're told they have power over women. Men historically and still today did and do exercise power over women in a lot of ways. But it often doesn't feel like power. It can feel, on the contrary, like castration. Mulvey is right that Hollywood cinema, and much of the society that makes Hollywood cinema is organized around and for a male gaze that turns women into desired objects, severed eroticized body parts which sell everything from alcohol to kid's board games. And she's right, too, that that same gaze places men as desiring subjects who act.

But what she misses is the way in which it often feels less like the guy is manipulating the look than like the look is manipulating the guy. To be the subject of the gaze is also to be the subject of the gaze. The storyline of film, and not just of film, demands that men identify with and perform male action and desire. You're supposed to be the master, but that imperative to be the master is a command that seems to come from outside. It's not that you don't want to follow those commands; it's that what you want is itself commanded. Which is why I think men so often blame their desire on the way women dress, or simply on women's bodies. Someone put these emotions in me; someone wrote this story where I act. If it wasn't me, it must have been you.

Often this drama gets put off on biology; we've got ape genitals, so what can you do. In that account, marriage is a civilizing force; the ball and chain men put on their eyes and hormones to discipline both to more productive purposes. Maybe some people experience it that way, but personally, marriage has set me free. I hated constantly having a crush on somebody; hated being trapped in the same stupid, repetitive narrative with the same stupid hero I despised and despised myself for not being. Marriage was a different and much more congenial narrative, not least because it was built on much less linear gazes—those rolling eyes only glance off to come back again. I never did have a crush on my wife, which isn't exactly how the story is supposed to go. But sometimes different stories are better.