What Happened to Nudity in Playboy?

It seems to be written for hip college bisexual lesbians. 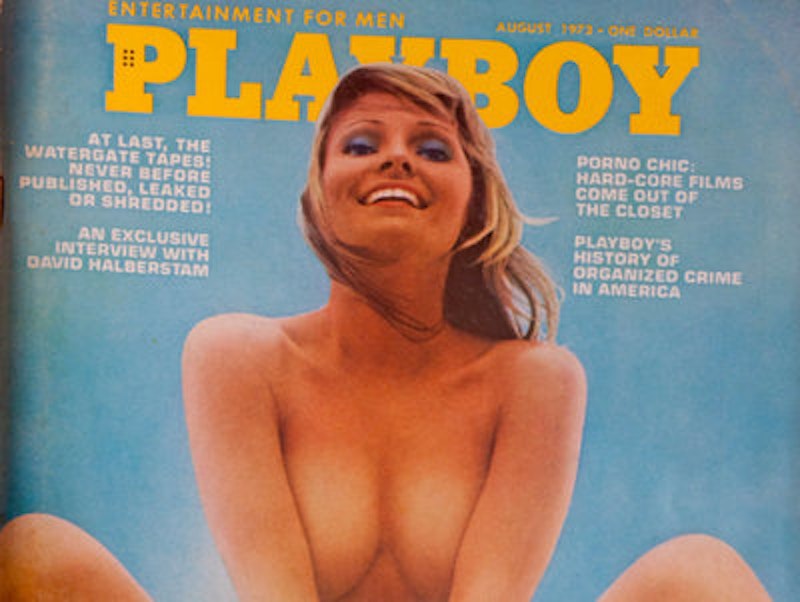 As if the world wasn’t confusing enough, with new technology we must learn and re-learn every time some corporation decides it’s time to “update,” one thing I thought would never change that did.

Some of most comforting thoughts of my pre-teen and teen years involved a stone fence built over 200 years ago, a case of Coors, which at the time was impossible to get east of the Rockies, and the staple magazine of all young men.

There was nothing more comfortable than running into the woods behind our house, finding that section of the rocks with the third one from the top loose, with that funny red mark that almost looked like the Playboy bunny. I’d remove that rock, grab one of a stack of Playboy magazines I’d stashed—stolen from my neighbor’s father’s son—and find those cold six-packs of Coors soaking in cool murky pond water. There was nothing like tasting something forbidden and looking at something else equally forbidden.

She was hot. For a line drawing.

Also in those magazines, I’d find articles about gadgets like the ones James Bond used and stories about people’s names I’d heard on the news but didn’t really care about. And every year, there was the all-college girl issue, which gave me wet dreams, and “Sex In The Cinema,” with photos from movies I wasn’t allowed to see of people “doing it.”

It was a very pleasant experience, and over the last decade or so, I began collecting new issues to pass down to my son if I ever had one. Or the kid next door. But not some of my nephews. Their parents already broke them.

Last month I received my newest issue of Playboy in its usual cellophane-wrapped white card stock package. But when I opened it, it was, well, for lack of a better term, “girly.” Not only did they ditch the glossy covers with the hot chicks that made you want to peek inside right away, but also the girls in the magazine were somewhat clothed.

The cover was now made of that matte paper that every other artsy magazine has like Paper, Monocle, or Dwell. Or anything from Europe. And on that shitty pretentious magazine was a photo of a woman who looked as if she just got off the L train from Brooklyn during the summer months. To make matters worse, not only are the boobs and boxes covered with either clothes, hands, or nature, the girls themselves looked bored. Not sexy. Bored. Even to the point of sticking out their tongue to the photographer. And worse yet, the centerfold looked dead.

The girl this month is in her underwear, of course, and when they list facts about her, it’s not measurements or turn-ons, it’s “What I studied In College”, “My Favorite Sport” and some really hipster bullshit she spews with the title “An Insider’s Tip For Visiting Paris” even though the girl lives in New York City’s Chinatown.

While Playboys of yesteryear, or two months ago, had interesting and insightful interviews, now we get unfunny, disjointed and stupid Qs and As with Bob Odenkirk. Don’t get me wrong, I love the guy, but they way he was presented and handled was so lame and politically correct, I began to think about skipping my second favorite television program. There’s also a cock-tease of a title of an article called “The Hottest Topless Porsche Ever.”

But what really gets me is how damn sissy the whole damn thing is. It seems to be written for hip college bisexual lesbians, because that’s what’s in and has been for the last 20 years. The sex column is written by sexy sounding girl named Rachel Rabbit White, but is about relationships of all things. Shoot me.

Then there’s the branding. Branding, branding branding. That’s the new youth bubble, how to properly brand everything from your line of hipster clothes to yourself. I understand that the Internet is hard to compete with, and that Playboy had to make some kind of change to sell magazines. But to write for and sell to the Bernie Sanders Club is just so vapid and transparent, it ends up as Playboy for Pussies.