There is no good answer to a question about your sexual history, mainly because we all just get embarrassed. 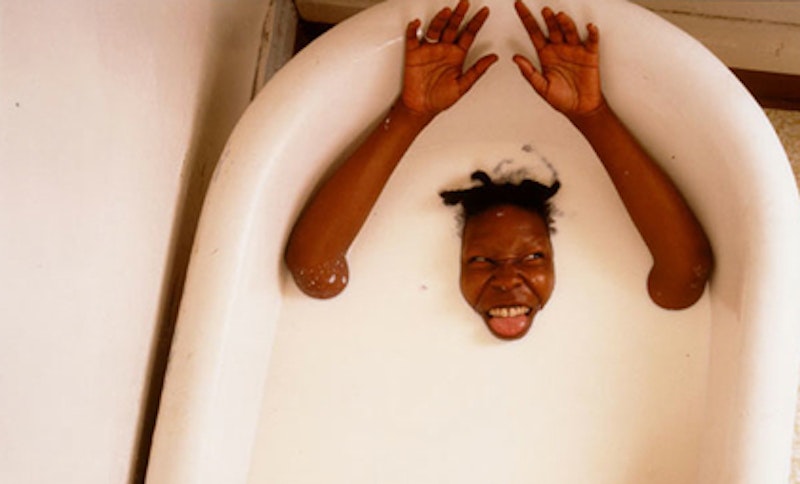 Whoopi Goldberg, who's been with like a bajillion people, as photographed by Annie Leibovitz.

And now, the kicker: “The bright side is that I’ve never been with a black guy.” Madison: “Well, I’m certainly glad to help you meet your quota.” There’s nothing like Affirmative Action dating.

I don’t really know how I wanted Jess to respond to my query. I mean, it’s not like he’d actually tell me the real number. I think most people decrease their number by intervals of 10 for significant others, but add on 20 to 30 in front of friends. In reality, nobody really knows how many people someone has been with at any given time.

So, how many lovers are too many?

My home girl Whoopi Goldberg recently came out as a slut on The View. I really gotta watch daytime TV more often. The four individually fierce bitches were cawfee tawkin’ it up with France’s smoking hot first lady, Carla Bruni, when Bruni admitted to having 30 lovers. But Whoopi was like, hahaha bitch! I got you beat. I’ve had over 50 lovers.

Can I just say that the bombastic reaction to Whoppi’s “Over 50 lovers?” comment by various media outlets has been a little unfair? First, why does anyone care? Everybody’s like, “I always knew Whoppi was a heffa!” People, please! Media personalities just love everybody else’s sex lives, don’t they? Britney’s a ho. Lindsay is a celesbian. Madonna is cheating. Lance is “out.” Chace is “in.” Sex sells, but damn.

And I’m sure that a “Whoopi-Bukkake Tell All” would sell millions.

That said, the issue isn’t that Whoppi traded her Nun’s Habits in exchange for over four dozen cocks. No. It’s that people are often embarrassed not just about sex, but about their own sex lives. Not like ashamed or anything, but embarrassed.

Why else do so many people exaggerate or conceal the number of partners they’ve had? Why else do I get red and giggly when my boyfriend touches me inappropriately in public?

Or maybe it’s that when you get into a relationship, nobody wants to know about past sexual adventures. Unless it involves, oh I don’t know, Chlamydia. And you certainly don’t want to be in bed and then your partner’s all: “Well actually, I really liked it when Bob approached it from this side and wore a poncho,” or, “You know what? Kim used her tongue and did a swirl at the end.” There’s something about feeling that your partner is fresh, clean, innocent, and that s/he would never do anything even remotely scandalous without you, because you want to be the one who totally rocks them out.

Isn’t that why everybody likes a virgin?

I’m not Dr. Ruth or anything, but it seems to me that the number of lovers you’ve had is a likely index of your potential to be unfaithful in a relationship. Sure, people stray for any number of reasons: curiosity, distance, loneliness, the relationship sucks anyway, or they are just wired to keep having sex with lots of people. It’s not like getting into a relationship means that everybody else morphs into eternal ugliness. But think about it: if you’re 30 and get into a relationship having already slept with 2000 people, it may be a bit difficult to keep your hands to yourself.

My friend Brian-the-Artist said this to his current bf: “I really like you but
I need to go to D.C. for the summer to participate in this artists-in-residence program. I’ll be back in August. Will you wait for me?”

The bf goes: “That’s fine and all. But I really need to have sex, so I’m going to do it with a lot of other people. Is that okay?” That’s what he actually said. Not so long ago, it wasn’t unusual for a gay to have had thousands of partners. Just read Samuel Delaney. But to be honest, I don’t think the number actually matters, for gays or heterosexualists. What does is the idea that your bf/gf has been/is going around the block, whether they’ve had five or 500 partners. It’s all in our heads. Because don’t nobody want to feel like their mate’s been picked over. I mean, unless you get off on that kind of thing, which is cool too.