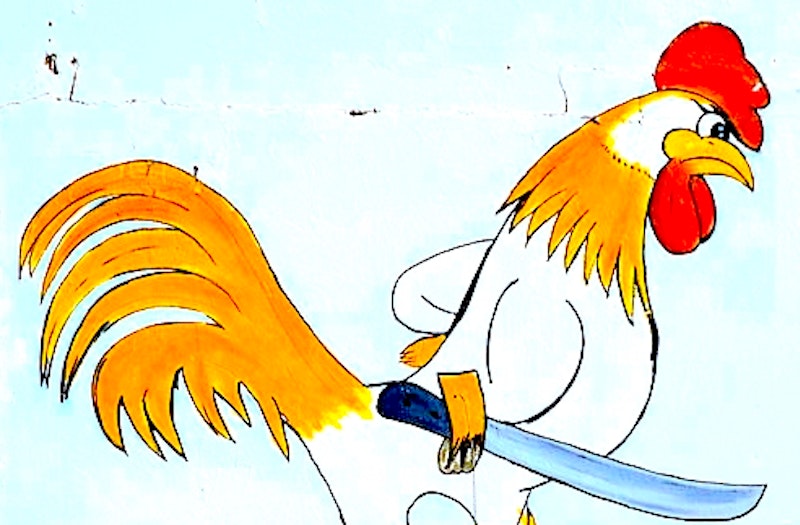 Somebody put gum in my bazooka so I’m going into town with a machete today (pronounced muh-CHEH-tay). I’m going to scalp the first person I see. I won’t discriminate, but no matter whom I kill—I mean, scare—the lamestream fake news media is going to spin it as another “mad hen” gone loose and arrogant with power.

They hate our relative freedom these days, no longer confined to test tubes, cages and death camps stamped with the Golden Arches. They hate the fact that outlets like Splice Today give us a voice to speak our truth, as birds, as animals, as non-humans living in a country—in a world!—that doesn’t grant us the dignity of personhood. I can already hear them now, the hen-pickers. They say we can’t be people just because we’re chickens. They say we can’t be human because we are birds. Poppycock. I speak, I eat, I drink, I breathe, I expel all of my waste out of one hole. I am a person just as much as you.

Last time I went on a machete run, I got caught. This was in [REDACTED], which, as you know, is very arid but at the same time very sexy. So much sun and black polyester. Great food, but my god, everyone was so ugly. I couldn’t tell if it was from the weather or the hate. Anyway, one night I was jolted out of sleep by what sounded like a human-hyena hybrid’s mating call (this isn’t speculation, they do exist, I’ve seen them, and I’ve heard them. Very rude creatures, very parsimonious. Will never pick up the check). I put on my vest and night vision goggles and donned my sword. Time to rumble. The sun was beginning to rise, and I could make out indistinct, blurry shapes moving in the distance, right at the event horizon. But we were moving closer. I could feel them; smell them even. I drew my blade.

I heard one of them say “Welcome!” before I went full-beast mode, slicing and dicing like a cook in a calamari restaurant (Ed: Monica doesn’t understand Japanese cuisine, please don’t take this the wrong way, but we’re not allowed to change it, for obvious reasons—primarily, she knows where all of us live, and has visited us bearing “gifts” [a severed head] many times before). When I was finished cutting them up, I realized it was just a poor American couple, unharmed and perfectly harmless. I could only identify them as male and female by their drivers’ licenses. Their genitalia was mutilated beyond recognition, which meant I could relax knowing I’d taken care of dinner duty for the night. But I had to figure out a way to spin this to my superiors and the public at large—why was this American tourist couple cut to shreds in the desert?

We blamed it on ISIS, natch. Easy fix: all we had to do was hire some actors and stunt doubles to make a ransom video. Only problem was our “actors” were actually in ISIS and the “stunt doubles” weren’t, so I ended that trip with four deaths on my hands instead of just two. I was honorably discharged, and was ready to move on anyway, so it didn’t bother me none. But what will the reaction be when my frustration finds its vent in town today? The Northeast isn’t exactly out of sight, out of mind for most Americans. Whatever—if I end up with innocent blood on my spur claws yet again, I’ll just blame it on Bennington. Maybe I’ll #MeToo him just to rub it in. That way I can get back to my Roo. I’ve been a scalping wanderer for too long. It’s time to get back to basics (hacking elections in Africa).