Significant Other or Co-Dependent Captor?

Love means not having to hang onto one another for dear life. 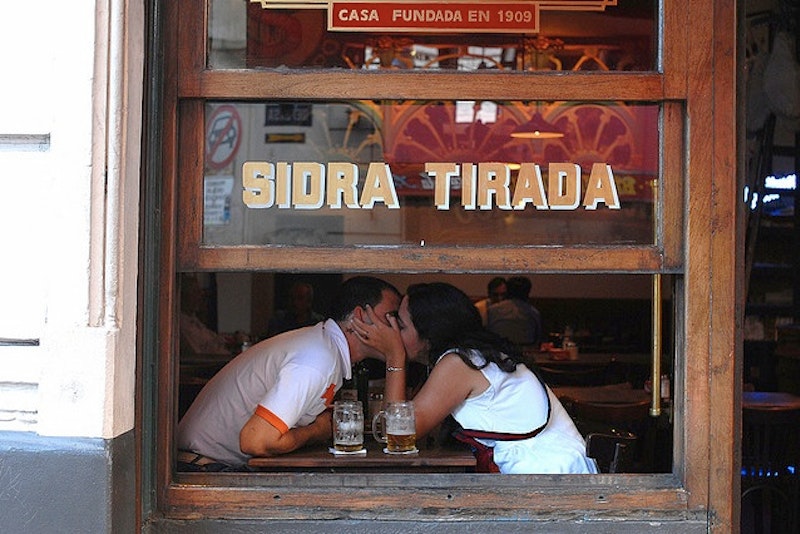 Fashion trends come and go with the seasons, yet people never seem to get tired of being worn, or of wearing one another. It’s the fingers through the lover’s belt loops. It’s the hand in the significant other’s back pocket or clutching the back of his shirt or wrapped neurotically around her bare shoulders, lest she suddenly break free. It’s the prolonged from-behind immobilization-qua-embrace, the imprisoning “X” of crossed arms, the bowlegged burdening cheesed off with fake laughter. It’s sitting right next to your boyfriend at Carrabba’s when—for logistical and conversational reasons alike—you could just as easily sit across from one another. It’s waking up one morning and deciding by mutual agreement that it’s definitely the right day for both of you to wear identical American flag-themed ensembles. For decades, politics kept Nelson and Winnie Mandela apart, but they weathered that storm better than most couples one often observes in public, for whom a separation distance of mere inches would seem to represent a yawning, unconquerable gulf.

You know those scenes in movies and television shows—usually these are crowd scenes, on the street or in some bustling enclosure or at some multitudinous event—where one person approaches another from behind, nudges that person with a gun or knife, and whispers something along the lines of “act normal, follow my lead, make a sound and you’re dead”? When I happen upon one halfwit wearing another halfwit like a scarf indoors, that what I think of.

Now, don’t get me wrong: I’ve got no problem with holding hands, the occasional affectionate lip-on-lip peck, a quick tickle in the produce aisle. But there’s something disquieting about the need on the part of so many to project a sense of ownership or possession of another person in public spaces, as if securing branded chattel: something profoundly desperate, something that doesn’t quite resemble true love.