The Vatican is tying itself in knots over the issue. 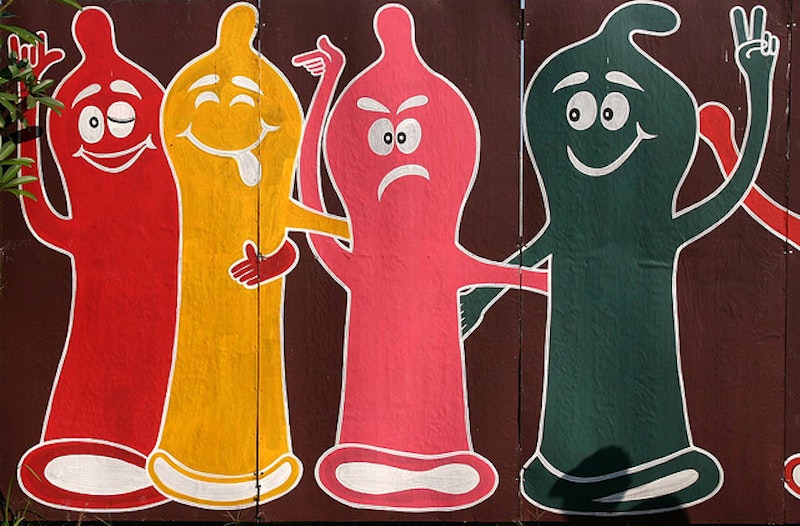 Imagine, if you can, 200 white-haired and balding bachelors, supposedly celibate, sitting around a conference table discussing conjugal love and concluding that it has divine approval as long as it’s not done for pleasure alone. That was the gospel truth as well as Roman Catholic orthodoxy until Pope Benedict XVI seemed to put the pleasure back into sex by validating the use of condoms in certain toxic situations. Sex apparently can now do its insidious work.

Those two sentences contain several qualifiers and modifiers because no one is quite certain, including, apparently, the Pope himself, exactly what or who the Pontiff had in mind. Theologians, including the Pope’s official spokesman, have been debating, clarifying and qualifying the remarks ever since they were revealed a week or so ago in a new book based on interviews with the Pope. Religion has a lot to learn about sex.

Those 200 pontificating prelates were America’s Roman Catholic bishops who assembled in Baltimore a year ago to draft a manifesto on sex. Their conclusion: Sex has a higher purpose than pleasure. Now comes Benedict XVI, no flaming progressive, who appears to soften that shibboleth by condoning the use of condoms, especially by male prostitutes, where the exchange of bodily fluids can be lethal. Say what?

Traditionally, the church has banned the use of artificial birth control in all forms and circumstances. A year ago, the pope infuriated AIDS experts during a trip through Africa when he proclaimed that the use of condoms was accelerating the spread of HIV. His latest revelation about the use of condoms, however, was viewed as an attempt to prevent the passing HIV from one individual to another, regardless of gender, which is a revelation in itself and recognition of heretofore forbidden territory.

Politics and religion are usually considered a toxic mix. But lately they seem to intersect, ever so warily although often it’s difficult to discern whether God or mammon is winning the battle. Tea Party candidates in the recent elections campaigned vigorously for the restoration of a theocracy where Christianity is given equal billing with the Constitution even if the Bill of Rights is suspended. Recall that the Delaware diva, Christine O’Donnell, was unaware that the First Amendment is a partition between church and state.

Most prominent of all, though, is the new theology under which entire churches and religions are based on attitudes towards sex and little else to recommend them as vehicles to transport their members to a heavenly afterlife. Religion is obsessed with sex, even at the suspension of individual rights, although in the transcendental sense the Catholic Church would refer to its preoccupation as a “culture of life.” The central tenant of the Westboro Baptist Church, whose congregation is comprised mainly of members of a single extended family, manifests its beliefs by waging a kind of benign terrorism against homosexuality. It does so by demonstrating at military funerals and defiling the American flag. It is classified by some as a hate group. Other traditional religious groups have rallied around opposition to same-sex marriage and have adopted as their own Eleventh Commandment the promotion of a constitutional ban on gay unions. Still other fundamentalist denominations have found the path to salvation in attacking abortion clinics and, in extreme cases, actually assassinating abortion doctors, such as Dr. George Tiller, who was shot dead in the head while attending Sunday church services. Throughout the ages, endless atrocities have been committed in the name of Christ.

There have been great divides and schisms within the Anglican as well as the Episcopalian Churches and other denominations over the acceptance and ordination of openly gay clergy members as well as women. And Pope Benedict has welcomed into the Catholic Church those conservative clergymen of other faiths who shun the progressive sexual leanings of their own churches, even those who are married and with families, contrary to the mandatory celibacy required of its own ordained clergy.

In fundamentalist Muslim cultures, homosexuality, if a country admits that it exists, is not tolerated and the penalty is death. Iran’s president, Mahmoud Ahmadinejad, recently stated that “homosexuality does not exist in Iran.” The statement came after two young gays were executed for suspected homosexual activity. And adultery will result in a woman being stoned to death in public view. But the rewards of the good life of martyrdom in the Muslim cause are spectacular, with the promise by Allah of 70 virgins on the spiritual side of life. Sex rears its ugly but pleasurable head even in fundamentalism.

But no religion has been more in the forefront of the battle of sex than the Roman Catholic Church. Begin with celibacy. The vow of celibacy historically had nothing to do with a man and a woman having congress, as many Catholics believe. Its origins had everything to do with property rights and the church’s intent to avoid feuds with families over the inheritance rights of its clergy. Single priests, the reasoning went, presented no such problems. The church’s unbending resistance to ordaining women rests on the arcane argument that Christ’s apostles were all males, even though Mary Magdalene was arguably his most devout follower. The preoccupation of sex extends beyond celibacy with the priesthood having been viewed almost as a safe haven and as bountiful poaching ground for active homosexuals and pedophiles. The two are different breeds. The church lately has had to purge and discipline its own clerical ranks after decades of top-to-bottom abuse and cover-ups around the globe.

But the Catholic Church’s entry into the new theology of sex-centric religion formally arrived in 1973 with the Supreme Court’s Roe v. Wade decision when it was forced to realign many of its long-held teachings into a new discipline of “life.” There is very little discussion today of heaven, hell, good, evil or even the teachings of Christ which were as simple as to love and help each other.

The introduction of Roe v. Wade compelled the church to reverse its teaching that capital punishment was an absolute right of the state and that suicide, under certain circumstances, was acceptable in the eyes of God. The church now opposes the death penalty as stridently as it objects to abortion. The church also strenuously reaffirmed its opposition to birth control as well as to homosexuality in that they offended God’s command to procreate. The debate on birth control was especially strident in the 1960s when new contraception began to appear and there was a showdown between the conservative and liberal factions of the clergy. A commission at the time recommended that the Vatican relax its ban on birth control but the Pope rejected the group’s findings. More than 600 theologians signed a protest against the pope’s decision.

Here’s the Vatican’s latest take on the use of condoms as conveyed by the Pope’s official spokesman, Rev. Federico Lombardi, as it appeared in the Washington Post: “I personally asked the pope if there was a serious, important problem in the choice of the masculine over the feminine. He told me ‘no’ … It’s the first step of taking responsibility, of taking into consideration the risk of the life of another with whom you have a relationship. This is if you’re a man, a woman, or a transsexual. We’re at the same point. The point is it’s a first step of taking responsibility, of avoiding passing a grave risk onto another.”

Got that? It’s not about sex, whether homo or hetero, it’s about life. If it weren’t for celibacy, maybe the clergy would have a clearer idea of the whole sex thing.