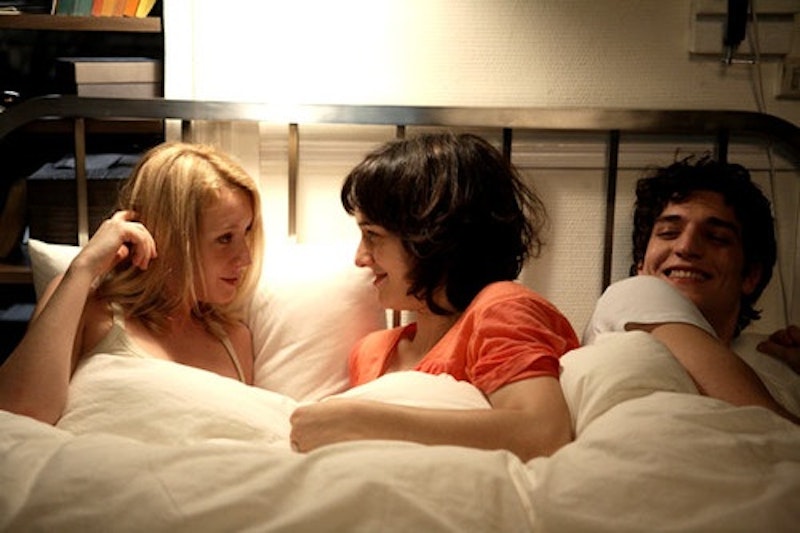 Nobody’s mature enough to make that stuff work. A polyamorous relationship is a juggling act, but with people instead of clubs or little rubber balls. The act keeps going until it doesn’t, at which point somebody’s chin makes contact with the floor. Or more than one person’s chin, perhaps a bunch. Crying takes place, and the writing of long letters shoved through door slots. What, it’s the same with one-on-one? Well, often enough, but not as often. With polyamory the hurt feelings are guaranteed. It will all end in tears, every time.

I say this from no actual knowledge of polyamory. But I know the world. Maturity isn’t something we have lying about. If somebody thinks they’ve stockpiled enough to pull a stunt like this, they’re lying to themselves. It’s a two-part lie: 1.) I’m more elevated and far-seeing than most people, and 2.) This permits me to have extra helpings of dick and/or pussy. Gurus peddle lines like that, and schmuck Westerners fall for the lines. Now a new breed of schmuck has cut out the middle man. The civilians do each other under authority of their shared high-minded patter. Instead of white light emerging from the holy man’s golaka into the recipient’s prajanu (“Let it absorb the impurities that obstruct your Svadhishthana, my child”), the ego-sticks attached to genitals tell each other stories about the new social order their allegedly decentered coupling will bring to birth. They’re like people who think flexing their stirrup muscles will make the clouds move. Except that stirrup-flexing, by itself, doesn’t cause kitten-titted juniors to sob across coffee-shop tables in college towns.

I say allegedly decentered because I have suspicions. I bet most of these lovin’ polyhedrons have a center of some kind, likely enough a guy with his corduroys crumpled on a chair while he lectures the girl underneath him. Soon her hour and 45 minutes on Thursday will be knocked down to an hour and 10, then become 50 minutes on Monday mornings, when the fellow’s en route to discussion group in the Comparative Religions/Cultural Studies building. Finally she’s left with 35, take it or leave it, and she’s crying across from her roommate’s San Cristóbal “Altos” latté. Meanwhile, Mr. Polyhedron is sitting in the library reading room and looking at a long-legged semi-lesbian with choppy hair and an interesting pair of cut-offs. He’s thinking about 9:15 p.m. to 12:45 a.m. on Saturday night. Or perhaps I’m bitter.

DVD corner. Has anybody ever seen The Master? I gave it a shot, but boy. Not four minutes in and I was out. That isn’t giving a movie a chance. Yet a pro critic (I forget his name) just tweeted out of nowhere about what a stinker the film is. He had that fact weighing on his mind and he had to let fly. Somehow I twigged to the movie’s dismality without sticking around and experiencing some. I don’t even know what did it. It’s like my mind has a gag reflex that’s triggered by dullness; the front of the brain need not take part. I suppose. Anyway, during those four minutes of The Master, the front of my brain was thinking “Shirtless, grubby men on a Pacific beach in wartime—what is this, The Dirty Dozen?” Which is inaccurate—The Dirty Dozen involved the European war, if I recall—and beside the point, since I knew a story about Dianetics would get to peacetime and the mainland in quick order. But discard the verbal crust of my perceptions and I had laid bare a truth: this movie sucked.

How do you teach such a thing? You don’t. I have a gift, and I guess that’s it.