Is The Daily Show just an all boys club?

Jezebel's recent accusations, TDS' open letter response, and the truth that falls somewhere in the middle. 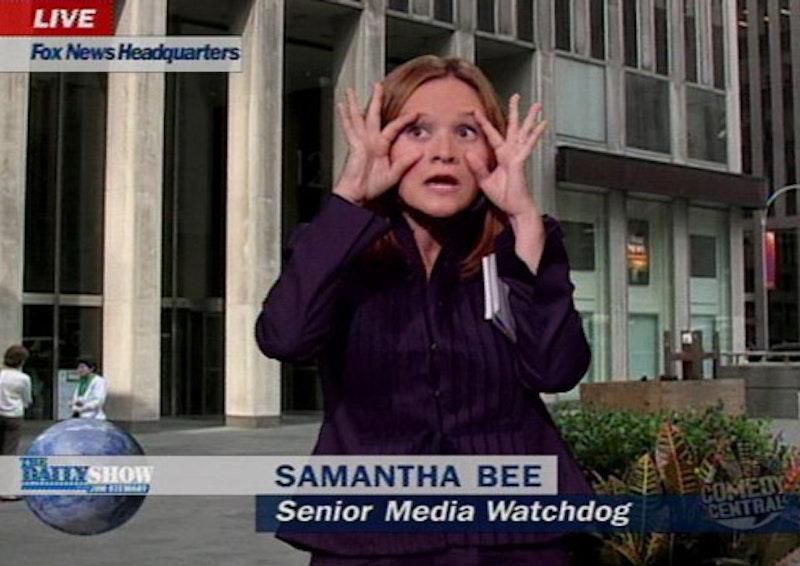 If you've noticed a dearth of on-air female staffers over the years at The Daily Show with Jon Stewart, you're not alone. Although Samantha Bee has been around, her frequent pregnancies have understandably kept her profile fairly low, and before her the show seemed to take a now-you-see-her/now-you-don't approach to lady correspondents (where have you gone, Nancy Walls, Lauren Weedman, Stacey Grenrock-Woods, and Rachael Harris?).

The estrogen-charged blog Jezebel addressed this perceived shortcoming on June 23, interviewing among others Grenrock-Woods and Weedman, who said that, yeah, the show's something of a boys' club—nothing new in the world of comedy, but still a little ridonkulous. The recent hiring of purportedly va-va-voomish Olivia Munn as a correspondent did little more than underscore the lack of respect TDS shows women.

Jezebel is mainly in the business of shit-stirring. Still, it’s worth noting that permission to interview current TDS staffers was not accorded to the website. Instead, you had the likes of Weedman, Grenrock-Woods and “one former executive” who says that “there’s a huge discrepancy between the Jon Stewart who goes on TV every night and the Jon Stewart who runs The Daily Show with joyless rage.”

How would The Daily Show respond—if at all? It took a couple of weeks, but yesterday the 31 current female staffers (including Bee and Munn) published an open letter on the TDS website, addressed to "People Who Don't Work Here" and generally pointing out that it's a great place to be, everybody's happy, sure it's tough work but we're up to the task, and other platitudes. The letter notes that "we make up 40% of the staff, and we're not all shoved into the party-planning department (although we do run that, and we throw some kick-ass parties)."

Included are a few pre-emptive strikes at those unconvinced by the show of unity (“Thanks to the male writers who penned this for us”), but the gist of the letter is that TDS is a family. No, really: “The Daily Show isn't a boy's club or a girl's club, it's a family—a highly functioning if sometimes dysfunctional family.”

That’s swell, but just how believable is it? Sticking a smile on your face and attesting in a public forum that your boss is a great guy doesn’t qualify you for bravery (or, arguably, honesty) medals. Did whoever thought the open letter up—and I’m confident it was one of the women—need to do any arm-twisting at all? “I know you’ve had some issues with Jon or Chuck or Adam, but it’s really important that we all sign off on this”?

There are problems with completely endorsing Jezebel’s version of events as well; interviewing former employees who were shown the door before they were ready to go isn’t likely to garner you many rah-rah remarks about how the environment is like a “highly functioning if sometimes dysfunctional family.”

From what I’ve heard over the years, including the infamous behind-the-scenes episode where Stewart threw a script in the face of co-creator/executive producer Madeleine Smithberg, recounted in the web article, I’d say the truth of the situation probably lies more on the side of Jezebel. That comedy has historically been a boys’ club isn’t breaking news, but it is a little disturbing to run across today, especially given the patina of self-righteousness that TDS trades in.

Then again, I may simply be guilty of, as a sidebar to the TDS staffers’ letter puts it, writing, "inadequately researched blog posts that cling to a predetermined narrative about sexism at The Daily Show.”