Selling out to vampires 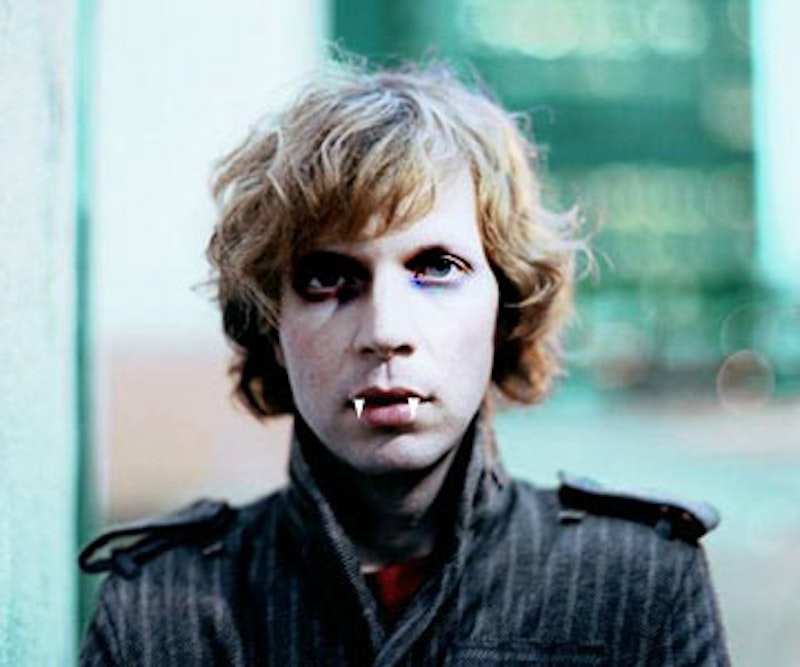 I've never read any part of the Twilight books, nor have I subjected myself to the films. I attribute this to the fact that I'm not a 12-year-old girl, a 12-year-old girl trapped in a grown man's body, a grown woman who likes to be told what to do by a threatening man, or have suffered any kind of debilitating head injury. There's nothing that comes from any facet of Twilight that lends it any kind of credibility, aside from the fact that it magically appeals to a lowest common denominator. We need to find out whatever power Twilight is harnessing and use it for the powers of energy reform instead of Burger King promotions and shirtless action figures. Other than that, Twilight just seems to be chemically designed to make middle-aged women wear t-shirts that didn't even fit them appropriately when they were 21.

This is why it's especially alarming to hear more about the finer details of the Twilight: Eclipse soundtrack. According to Rolling Stone, over 400 songs from musical artists around the world were submitted for possible inclusion. While being included on the soundtrack of a Hollywood film can be a career catalyst for the right musician, the whole thing reeks of American Idol hollowness—a final, desperate bid for relevancy amid a teeming ocean of awful MySpace hopefuls who think that they're the first to use the background music from “Mike Tyson's Punch-Out!!” in their questionable aggro-electro postmodern folk compositions. This isn't the disturbing part, though.

What unsettles me is the fact that Beck, The Black Keys, and a few others equally, adamantly iconoclastic entities have also lent completely original compositions to the soundtrack. When Beck becomes involved, the process of “selling out” quickly becomes re-contextualized into “social commentary.”

The best possible example of excellent, credible artists composing original music for a soundtrack is, in my admittedly geeky opinion, The PowerPuff Girls: Heroes and Villains album, released in 2000. The album forms an original, charmingly musical narrative that was clearly designed for the adult audience of the show, rather than the kids who were supposed to be watching. Granted, this was a program that presented an intellect spanning multiple generations, but the use of music to break through to an audience that might have been incongruous with the core audience was an innovative, brave move. It incorporated DEVO, Frank Black, Komeda, Shonen Knife, The Sugarplastic, and a few other talented bands. The results of this soundtrack project shifted my entire perception of music while I was in college, which says more about me than I usually care to admit.

So, when the gruff and snarly, lo-fi Black Keys start lending unreleased tracks to a movie for and about pale morons, is it an artistic move, or just something predicated on their newly-strengthened relationship with Warner Music Group?

The term “selling out” is a debatable one, but when an artist does something commercial, we can accept in it one of two ways: either the artist is changing their aesthetic in the interest of profitability, or they're attempting to elevate the commercial towards a more artistic vision—and coincidentally, getting paid handsomely for it. KISS doing soda commercials presumes that anyone took KISS seriously in the first place. DEVO recently composed a completely ironic narrative regarding their “selling out” to popular opinion.

Gaining mass appeal is a goal of most creative people, if only to provide a life for themselves where their creative impulses can support them and be uninterrupted. When this organic path becomes interrupted by a few inorganic, profitable diversions, the key is to actively maintain that sense of self which can easily be lost along the way. It's obvious, probably a lot harder than it sounds, and I'll tell you what it's like when I get there.

The initial terror and disappointment upon hearing that Beck had given in to the all-encompassing, soulless beast that is Twilight had abated enough for me to actually listen to his contribution: a moody duet with Bat For Lashes' awesome Natasha Khan, and it seems obvious that no IQ points were sacrificed at the teenybopper vampire altar. Let's chalk one up for the intellectuals.