Tabloid outings and the need for “either/or” categories. 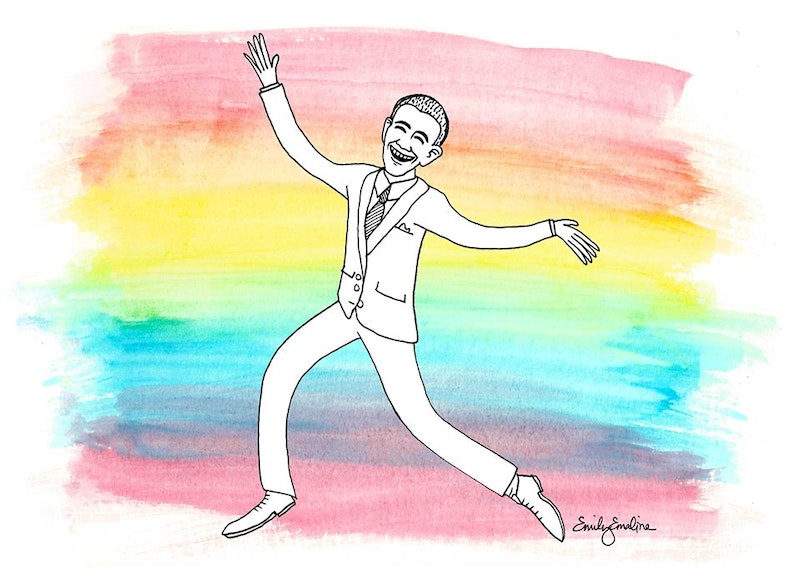 If Harvard PhD, unrepentant birther, and noted conspiracy theorist Jerome Corsi had his way, Barack Obama would long ago have been driven from the closet and forced to declare his preference for the less-fairer sex. I urge you to watch all 14 minutes of Corsi’s dive into this non-starter subject. Perhaps the most eloquent and by-the-book purveyor of the modern "paranoid style," Corsi explains that he’s done all of this research about Obama's ring-wearing past not because he has any problems with LGBTQ people but because Obama's failure to confess this past "marriage" to a Pakistani man suggests that he had an ulterior motive when he issued his personal endorsement of government-sanctioned gay marriage.

This, like most of Corsi's work, is tommyrot, but let's assume for the sake of argument that this claim is somehow borne out. If Obama had a consensual homosexual relationship of some sort two decades ago, should this color any of his subsequent statements regarding gay rights? The answer, I think, turns on a distinction between "homosexual acts" and "homosexuality" that individuals such as Corsi are either unwilling to make or are simply incapable of making. For these individuals, engaging in a single supposedly transgressive act is sufficient to forever brand the "guilty" party. The act, then, becomes an entire category of being: he or she isn’t merely someone who did something, but someone who is something.

By this logic—the kind of reader logic that propels the views and sales of cheap tabloids specializing in this brand of muckraking into the stratosphere—everyone is merely a hair's breadth away from being "outed" as a member of some genus of Not-Us. This is wholly in accord with human history, if brandings and maimings and ghettoization are any indication, yet it seems strange that these revelations retain such purchase in an era of putative openness with regard to everything from recreational drug use to consensual intimate activity.

And I suppose it’s actually an era of openness, in the sense that you must always and everywhere be openly declaring who and what you are. Elements on the moral right and left are uneasy with those who refuse to declare their allegiances in uncertain terms: they want, in the words of Homer Simpson, "[their] beer cold, [their] TV loud, and [their] homosexuals flaming." The hipster must be identifiable as such, as with the meathead, the airhead, the ethnic caricature, and other stock types. Multiple-camera sitcoms (and single-camera critical darling Modern Family, too) thrive on these stereotypes; subtlety and nuanced characterization rarely amount to gangbusters business in the marketplace of ideas.

I still recall Dylan Baker’s semi-sympathetic portrayal of a conflicted pedophile in Todd Solondz’s film Happiness with a degree of shock and horror. The pedophile, after all, is for most of us merely a classification, and a lowly and degraded one at that. The notion that such a creature could have normal feelings and engage in normal activities was repugnant to my teenage self—how could that individual be anything more than an unflattering mug shot on the right side of the screen during a local news report?

On the subject of the Watergate break-ins, philosopher Jean Baudrillard writes, “[first], the task was to dissimulate scandal; today, the task is to conceal the fact that there is none.” In other words, the force of public opinion-making must be directed at assuring everyone that fiendish acts such as that are not in the normal order of D.C. politics. Even as researchers into human sexual behaviors suggest that most of us would be amenable to any number of intimate activities, it falls to the likes of the National Enquirer and Jerome Corsi to reassure us that, no, far from it, only these specific people are the homosexuals, only these specific people are the adulterers. To which one must be reminded of these lyrics from country singer Steve Earle: “The truth is it doesn’t matter what you do, until you gaze in that mirror with an eye that’s true and admit that what scares you is the me in you.”

What affrights Corsi and others like him, then, is not that Barack Obama is gay, but rather that they themselves are a single homosexual act away from being similarly labeled. And so we are left with a weird situation in which almost all pundits, critics, and tastemakers are loudly proclaiming their membership in various clearly-defined groups (yet each of them, like evangelist Ted Haggard, is only one wild bender away from falling off the straight and narrow). Meanwhile, we members of the general public, that large and amorphous assumed audience for these line-in-the-sand drawing figures, continue to think in absolutes yet live in ways that confound the absolutes. There’s nothing particularly appealing, at least from a marketing standpoint, about reminding people that life is really complicated.

So does it in fact matter if Barack Obama is gay? Of course it does, except not at all.