A True Story About Men and Women

It involves a mouse and an elephant. 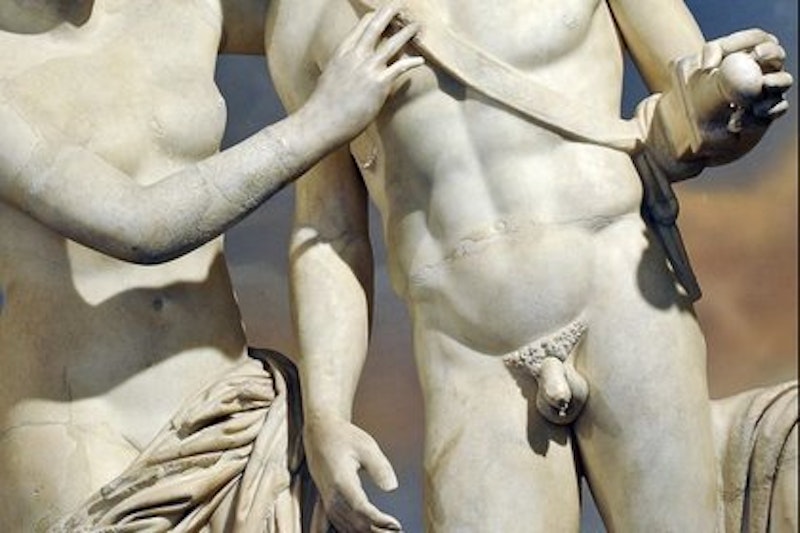 If you venture down into the basement of the building where I live, you will find a small, noisy, self-centered man who is usually drunk. That's my building's handyman, and like many bright men he's a fool. But he's also lively and occasionally kind-hearted, and by now I've known him a dozen years—God help us both.

The handyman is Quebecois and speaks English as a much-abused second language. He grew up in the countryside, which in those days came just to the edge of town. Not so far from Saint Catherine St. you'd find cows, chickens and frogs, and in a rowboat there might be a dark-eyed, beetle-browed, scuttling young creature fishing with a rod for his family's breakfast. That was the handyman as a boy, and he's not much larger now than he was then.

He doesn't mind his lack of height. People in Quebec don't make so much of a fuss about men being short, and the handyman has always had a way about him. He likes women his own size, but he also likes women who are taller because then the other fellows take a step back and try to guess his secret. Either way he's always had women around.

That's the case even now, when he's a broken-down soak lurking in the cellar. There's Lily and Marianne, and a while back there was Mercedes, until Lily gave her a swat on the head and ran her off. Lily is by far the handyman's favorite. She's wonderfully handsome, with bronze skin and a statuesque build. The handyman says they're the same height, but I could swear she was a head taller.

Lily goes through boyfriends at whim; meanwhile, she and the handyman remain a permanent item. He says their secret is a complete lack of sex. Nowadays that's not a challenge because he can't get hard. “My pecker is dead,” he likes to announce. “No, my pecker is dead. The alcohol. Oh no, no, my pecker, no, it is no good these days. No, my pecker, it is—” And so on, because he repeats himself and never shuts up.

For a long time I thought he had a big penis. That's because one evening, very drunk, he emerged from his cubbyhole of a room wearing only his ragged bathrobe, which he had forgotten to close. Dangling in the shadows, there appeared to be a medium-size eggplant bruising his inner thighs. “Wow!” I said. “You've got a big one.” The handyman preened himself. For years I remained under the illusion that he was hung. This was so even though his love secrets—repeated to me far too often—involved a lot of cunnilingus to start things off, followed by some brief penetration when the woman was at last in a happy frame of mind. No mention of his supposed secret weapon.

Finally I asked him, “Wait, don't you have a big dick?” He answered me with quiet good sense. “No,” he said. “No, not me. It is usual, that's all.” The next time he went flapping around in his bathrobe, I took a good look and saw that he was right. I told him so. “I thought it was big,” I said, “but it really isn't anything special.” He said, “No, no, that is right. No, it is not big. That's okay. That's all right like that.”

“This is a story,” he said. “There is a mouse and he is walking down the road. There is an elephant and she's moaning and complaining. She has, I don't know, her foot hurts, her paw, and the mouse helps her. I don't know, he takes a rock out of her shoe. All right, not a shoe. It doesn't matter.

“So when she moves, her back, her back shakes the tree and a coconut falls and it hits her head. She goes, 'Ohh.' Like that. Just 'ohh.' And the mouse, he says, 'Yeah, bitch! Take it all!'”

So the handyman and I laughed about that one for a minute or so, which is a long time to laugh at a joke. It's the funniest thing he has ever said and it's the only joke that he hasn't told twice.