Emma and the Quibbits’ were behind the “failure” of the Shadow system (allegedly). 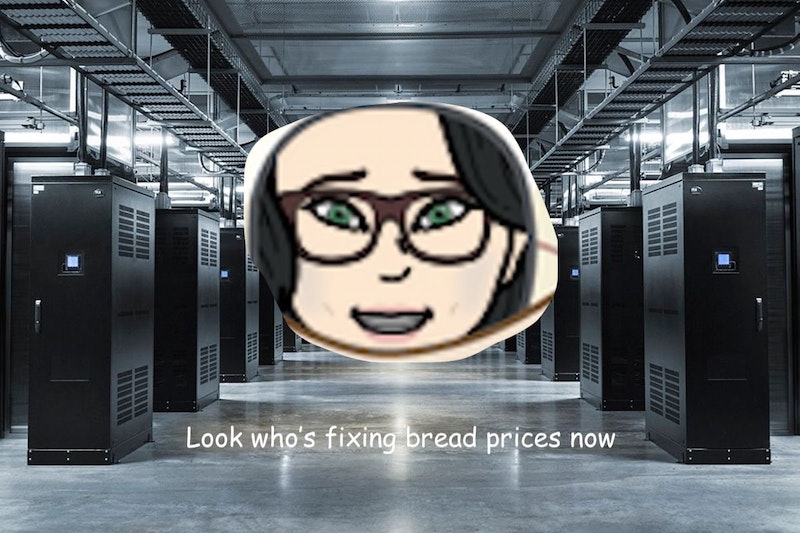 “Goom-BYE, caucus results!” Emma picked up her gun and emptied the clip on the Shadow servers calculating numbers coming in from Iowa precincts. Don stepped outside—he was our driver. I didn’t want to take on this mission. I don’t like rigging elections: I’ve done it before in South America and don’t like it, it’s messy. It’s fundamentally undemocratic and flies in the face of the beautiful conceptual spirit of the United States of America. To live as a “chicken” in this country is to live life on the defense, as my wife reminds me every day. In terms of income, I take what I can get. Besides, I’m not allowed to vote, so what do I care? You people, as I’ve said ad infinitum, make me fucking sick. And nothing makes me nauseous more than incompetence.

Anyway, it wasn’t my fault. It was supposed to be a clean job, in and out. No. Emma got excited. We made it to the satellite server in [REDACTED] just before 8 p.m. CST. No one was there, as promised, and there was no cell service for a 50-mile perimeter, also as promised. Monica, Emma, and I got in wearing balaclavas and Lord it was a scene: smooth, white walls and floors, seamless everywhere, a kind of alternate reality. We could hear our heartbeats, until Emma started waving her gun around. “Who is this wonderful creature?” Monica and I turned around, and Emma was about pet a robot cat. They’re very realistic looking and they bite. My wife and I performed a combination spur claw on the wretched animal imitation and disabled it within seconds.

Then Emma started crying. “THIS IS NOT MAWLRIGHT, FRIENDS.” We explained to her that no, this wasn’t son of Rolo, nor was it a beast of burden like us. This was a robot, a toy and a weapon used to guard government secrets. She calmed down quickly (she’s a professional), but there was more pacing and threatening to “go off” while we unzipped the faux-feline’s fur suit. Emma shrieked and shot the skin three times before vaulting to the end of the impossibly long hall. All we could see was white, until it was black. And then we were in a basement made of concrete, full of whirring servers that reminded me of my (very brief) video-gaming phase. I must’ve lapsed into old habits, because Monica admonished me and then had to slap away my wing from what looked like a pretty sick rig. I suddenly had an intense craving to play Diablo II for seven hours, and then EverQuest for another 13, but then of course I realized the [REDACTED] cognitive disruption machines had been turned on when Emma tripped the alarm.

“GOOOOOOM-BYE!!!!!” So we just started shooting. It was like a Wong Kar-wai movie, bullets flying and computers exploding in a rainbow of colors, emitting snake-like hisses and multi-colored steam. It was amazing. It was as if we could hear the deflation of democracy in America in real time. “THIS IS HOW I WIN! THIS IS HOW I WIN!” Emma was jumping up and down, still shooting at the obliterated Shadow servers that contained the actual results of the Iowa caucus. The partial results released by the DNC and individual campaigns are, and I’m gonna let you in on a scoop here, fake news. We compromised the Iowa caucus to a permanent end, and were paid handsomely for it. We made Emma carry the gym bags full of money, and once we got out of the Dead Zone, had a very nice Waffle House late night dinner.

Of course we had to requisition the restaurant before ordering, given their horrendous record on animal rights. Emma was the only one big enough to operate the kitchen, so she made us all flapjacks and toast. “My bird friends… I regret to inform you that the blueberries are cashed.” What? “Ain’t making blueberry pancakes tonite, b.” Maybe she could improvise? Her eyes lit up: “OOooooooh well don’t mind if I do!”

Suddenly it was like a screwball comedy in there, and even the tied-up and duct-taped employees got a kick out of Emma’s best Carole Lombard impression as she whirred around the restaurant like a roadrunner making us the most delicious vegan meal possible in a slaughterhouse of waffles. We had a blast eating together and showing off our guns to the employees (we couldn’t let them go, and I think one of them lost consciousness, maybe died? IDK honestly…). Emma mulled over taking them as prisoners, but we had to stop her.

“Eeny-meeny-miny-moe, catch a-” EMMA!!! “What could possibly be so urgent as to interrupt my lovely little song, my birdbrain friends?” She knows “birdbr**n” is a slur. But it was too late, the cops showed up. “Oh wow they will NAEEE stop me!” Emma raised her gun but we got her into the back and threw her in the truck when Don, who stepped outside, got us on the road just time. We didn’t even have to cover up any civilian “disappearances.” Just a routine unsolved robbery—an ordinary day in the United States of America. I’m putting my sunglasses on.