A Furry Thing Happened on the Way to Hamilton

R & M pause in a Buffalo hotel room for a brief moment of peace. 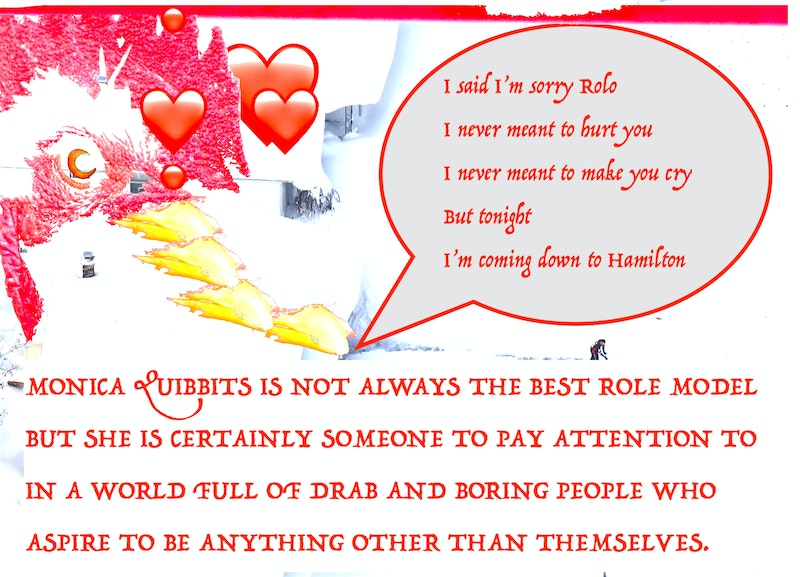 I’ll tell you what happened to my husband and me two weeks ago in bucolic Hamilton (well, when we tried). Excuse the clichés, I’m very upset about everything—the artist is not in the building. Today I write to you as a humble craftswoman of avian ancestry. I present myself to you, sapien-scum. Hamilton—it’s not just a great play. It’s also a neighborhood of Baltimore, Maryland, an awful city infested by rats and drug addicts. You may be surprised by my candor, but I agree with President Trump on this front: your city is disgusting. I can’t get a Boar’s Head sandwich anywhere and your bodegas are trash. I don’t eat chicken or turkey, but I’d like the option. A just society would provide so much.

Before you make any assumptions about the title of this article: No—I don’t support humans sexualizing animals. I find it disgusting and so unbelievably cruel. As a hen in a man’s world, I must always be suspicious of “animal lovers.” They’re usually schizophrenic or suicidal cowards. I don’t like cats, but I do feel bad for victims of “cat women”—what a true hell it must be to be a slave to someone who wants to die with every fiber of their being but will never bring themselves to do it and make the world a better place.

“Don stepped outside…” Rooster told me this was a reference Emma (our target) would get. He composed a tweet. He sent the tweet. Then he fell asleep at the wheel of our Volkswagen (small car), with six hours to go.  We never made it to Maryland that night. We barely made it out of New England. But we took a bizarre detour (because of a certain you-know-what named MapQuest) and ended up in Buffalo. We broke into an unoccupied hotel room and ordered couscous and club sandwiches and overpowered the bellhop to get his keycards. “No, please, I’m an animal lover!!” Say no more, my friend… but yes, I wanted a Cobb salad. Yes, I wanted French fries. No, Rooster hasn’t been watching his cholesterol. No, he doesn’t eat red meat anymore out of spite (he has a problem with pigs and cattle).

We unwound. I realized it’d been the first time in months that I’d felt something close to peace, a calm that felt so familiar and yet so distant at the same time. I asked Rooster why he wanted to go to Hamilton in the first place. “It was your idea”—and honestly, it could’ve been. He could be right. Who remembers anymore? Do any of you really care about our tussles with John Boehner? Rooster did, and that got him sent to Guantanamo Bay. Maybe you’ve heard us talk about that saga before. You might want us to come up with new material. I don’t blame you, it’s just health problems that keep us stagnant more often than we’d like. I have to ride on red letters. So, with that in mind, don’t get started on Emma’s cats—they really bother my Roo for some reason. I don’t know why, but he’s stubborn and when he says “Charles Whitman did nothing wrong,” he means it. Not now, maybe not all that often in the past, but in that moment? Yes. I love my husband. He really wants to “take them out”—I don’t know if that means murder or mate, but I don’t like either. No one asks me anything. So I stopped him.

“Why are we doing this?” I interrupted my husband. Where was the fun in stealing a hotel room if it was all going to end with, at best, some catnapped kitties that we’re only cursorily aware of via the Internet. At worst? Not even a felony (you people make me sick). We agreed to leave in the morning and go back home. My husband is on Twitter too much, and it distracts from his work and therefore his income. Our income. Problem. Maybe we are sick so often because we are bourgeois—the proletariat is never taken out by a cold or a mild flu. They know how to persevere, indefinitely. Rooster and I have had some rough experiences in the past century but nothing like the Middle Ages. We swap stories, remembering the dancing manias and plague and mead poisonings…oh, how simple and brilliant everything was back then. Humanity was just as stupid and hapless as the animal kingdom. It was wonderful that we got to watch you through the decades, you a species a perfect model for precisely what not to do. We are silent judges and we are wise.

Regarding Rooster—I’ve lately been known to throw a spur claw or two up in the air if I hear the words “Meghan McCain could low-key get it.” Rooster knows not to make asides when we’re traveling, so I asked him: Why? Why do we have to bother an innocent woman and her pets four states away? Why do we always have to be saviors? Besides, he’s just saying that because his editor told him to… said he’d be out of a job, as if one website can contain these eggs.