Monica did not wish death on the U.K. PM—she merely wished to visit him in the middle of the night. 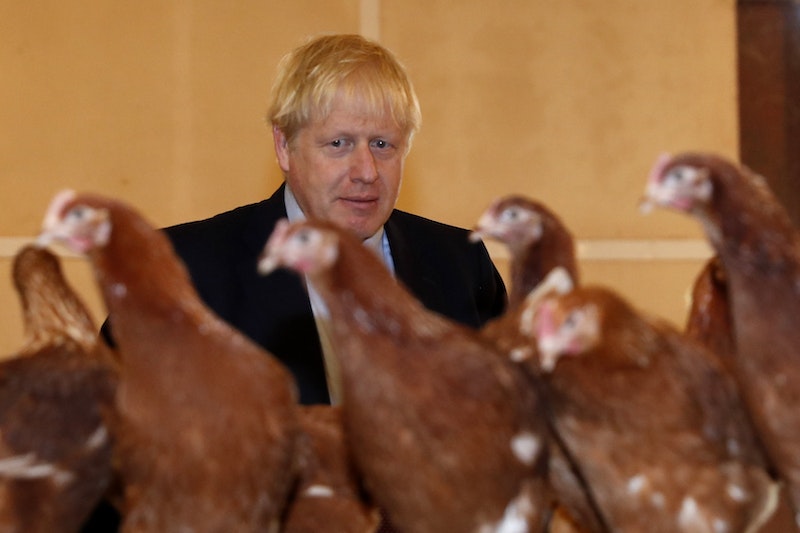 I find that I require a biscuit. With MAYO! I’m disgusting, or as the British call me, a “pathetic low-life.” Some punter cunt had the temerity to call me exactly that when I merely tweeted “Visiting BoJo in the hospital” along with a picture of me plugging in his ventilator. Some idiot Briton called me disgusting and I said, “Bitch im American,” because I am, and I can insult the Prime Minister of your piddly little island state. The U.K. is my least favorite country in the world besides Canada. They have horrible food, ugly people, rude women, weak men, bad art, and an obsession with class and station and Jewish people.

I don’t often go out of my way to wish death on world leaders, but I’m bored. We’re all inside, quarantined, and trying our best to adjust to this new viral life. This household can’t wait to see the downfall of meat eating and factory farming in this country. Processing plants are already closing because of massive amounts of workers becoming sick. Truck drivers are warning of shortages and delays as they fall ill. Eventually, the breadlines themselves will function as industrial slaughter machines, a ritual sacrifice of the most poor and disadvantaged in order to purify the world of the sins of the most craven elites keeping this engine running.

I know all this because I worked for a government a couple of years ago. I can’t say who, I can’t say where, but it wasn’t legal. It wasn’t illegal, either.

(Let me just say that I’m privy to the skeletons in the Cuomo closet, and rest assured neither of Mario’s sons will become president. Yes, the piercings are real, and no, Mario assured me he didn’t visit Chris in the midst of his little Fredo’s own bout with the novel coronavirus. “PHANTASMAGORICAL EXPERIENCES THAT WERE NOT DREAMS”—yeah, okay Chris, we get it, you want to be on Broadway. Not in this lifetime, buddy.)

In addition to the meat murder industry, I’m hoping for the downfall of the United States Postal Service. Why? Well, they’re the only mail carrier that’s allowed to ship live animals. Live animals. LIVING BEINGS. THEY SHIP THEM LIKE SLAVES! OBJECTS TO BE COVETED, ENJOYED, AND SEEN RATHER THAN HEARD! IT MAKES MY BLOOD BOIL! WHY MUST MY BODY BE YOUR SUSTENANCE?

I’ve calmed down. I completed Emma’s new crossword puzzle, and now I feel better. There’s only so much hate one can hold in one’s house. That’s why I made Rooster write in the shed today. He gets so worked up when he’s writing, he’s like a method writer, I guess he must be working on a mystery or a spy novel because he keeps screaming things like “murder” and “pain” and “agony” and “double reverse encrypted segmentation.” I told him we already have William Gibson and we don’t need another. He didn’t like that. He went to the shed on his own. Such are the wiles of Monica Quibbits…

Mayhaps I’ll run for office in a couple of years. Should I start out with state legislature? Or go right for the big one like beta cuck Andrew Yang or supreme sex goddess Marianne Williamson? I’m not a fan of the privatization of water in America, and I don’t think many others are, either. I’ll campaign against this! I’ll also personally clean the water in Flint by feather (it can be done! Patience, little ones…) But I’d never support a rapist, so Bennington can’t be in the administration. Mayhaps my husband will be my Vice President? No, he’d be happier as First Bird—or First Cock? Nothing is set in stone, none of these rules are written. There’s a pandemic occurring, and now is the time to make new rules. Stay tuned, watch this space, and catch me slipping out of 10 Downing Street in a gown and scrubs…