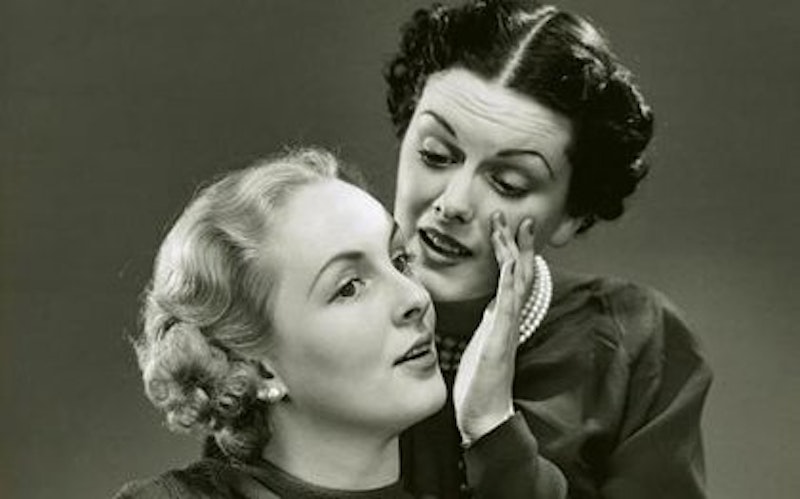 The popular media loves evolutionary psychology. There's something irresistible about the idea that our gender roles are hard-wired. You get to say, "Men are from Mars! Women are from Venus!" over and over and it's not frivolous gossipy horoscope level dreck because, hey, look science.

Olga Khazan goes through this at The Atlantic in a report on a story about sex and bitchiness (can you hear the page views ticking?). Researchers in Ontario did a study in which they observed pairs of female students when interrupted by a third young woman. In some cases, the woman (always the same one) was dressed conservatively; in some cases she showed cleavage and wore a mini-skirt and boots. In instances where the woman was dressed more sexy, the interrupted pair was much more likely to roll their eyes and make catty comments; one even suggested that sexy-dressed woman was sleeping with a professor. They were (in the researchers’ terminology) bitchier.

So, what you have is some evidence that young students in Ontario harshly judge peers who dress sexy.

The article then says this:

In short, the article suggests that women make bitchy remarks about their sexily dressed peers as an evolutionary mating strategy.

Khazan does suggest that this might going too far, citing a number of researchers who argue that slut-shaming could just as easily be cultural as biological. But I think it's worth pointing out how completely ludicrous it is to treat the connection between bitchiness and evolution as science.

Imagine that the interloper in question had been dressed, not in a mini-skirt and boots, but in a clown suit, or a modest ball-gown. Is there any doubt that the interrupted women would have reacted with incredulity, eye-rolling, and laughter? Are we supposed to conclude then that women are evolutionarily hard-wired to denigrate clowns? And why is that any more ridiculous than the suggestion that woman have been evolutionarily hard-wired to resent mini-skirts? I'm pretty sure cave people didn't wear those, either. As Agustin Fuentes, an anthropologist quoted in the article says, the short-skirt and boots combo is a "meaning-laden image," just like a clown costume. It's not an instinctual universal.

There is no scientific evidence to link Ontario student bitchiness to the evolutionary demands of mating. Khazan cites a number of studies showing that women are verbally aggressive and use exclusion and gossip—in other words, she shows that the results of this study are consistent with other studies, if not exactly cross-culturally then at least among similar populations. But there is no evidence presented that these tactics actually result in better mating outcomes for bitchy women—if, indeed, even conducting such a study would be possible, given the vagueness of a criteria like "better mating outcomes." Certainly, there's no sign in the fossil record to show the evolutionary development of bitchiness. Corroborating evidence here is not only unavailable, it’s impossible. And if evidence is impossible, what you have is not science, but a just-so story.

Again, the article shows that the use of evolution here is tenuous. And yet the headline (probably not written by the author) reads, "The Evolution of Bitchiness," rather than, say, "Study Shows Ontario Female Students Are Bitchy," or even a more tentative, "Where Does Bitchiness Come From?" If I were an evolutionary psychologist, I'd probably be fascinated by the mating implications of this fascination with evpsych. Does believing in simplistic biological determinism give one an aura of authority and certainty that improves one’s chances with the opposite sex? Or does thinking about mating constantly mean that one seizes on more reproductive opportunities, as was perhaps the case for our randy Stone Age ancestors? No doubt some enterprising university researcher is already writing grants to research these pressing questions. While we all wait for the answers, I'll just sit here and bitch.