You Want to Know About Male Privilege?

The lady in the right-hand corner told us all about it 90 years ago. 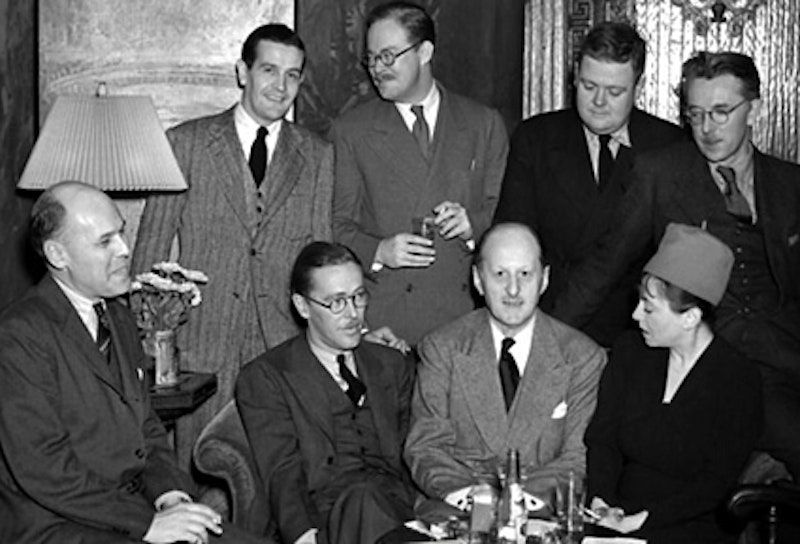 Back when alcohol was drunk at speakeasies, when America was governed by thin-lipped Protestants wearing narrow ties, there was a good-looking, smart-mouthed, talented young woman who had an affair with a young man who was also good-looking, smart-mouthed and talented. When the woman became pregnant, the man bundled her off for an abortion. Then he dropped her. She was furious, and as a result we have a short story that's worth taking a look at.

But she was a writer, famous in her time and still in print now. In large part her specialty was chatter. Her book reviews for the early New Yorker (“Constant Reader”) are written in a jingly, manic prose that sounds like a deluxe version of a bright young thing who has strong likes and dislikes but not much thinking to put behind them. Her verse (she and Ogden Nash were two of the last poets to snag casual magazine readers with work that's remembered today) goes in for neat rhymes and busy meters, often enough with old-style talk about flowers and teardrops appliquéd onto the age of dropped romances and morning-after depression. (“Oh, when I flung my heart away,/The year was at its fall./I saw my dear, the other day,/Beside a flowering wall;/And this was all I had to say: 'I thought that he was tall!'”) Many of her short stories fall into he-said/she-said Ping Pong matches where the dialogue rattles along and the young make fools of themselves. (“'Goodness,' she said, 'if you want to go so much, please don't feel you have to stay here. I wouldn't have you feel you had to stay for anything.' 'Ah, don't be that way, will you?' he said.”)

Parker became rather sour about all this. “Dammit, it was the '20s and we had to be smarty,” she recalled years later. “I wanted to be cute. That's the terrible thing. I should have made more sense.” But cuteness can be high-quality or low-quality, and hers usually fell into the first group. When she put her rattling aside she had penetrating things to say. “Mr. Durant” is an example. It's a story about a man taking the bus home from work, and it's told in drily amused prose that doesn't jingle. Instead we watch a man's soul, what there is of it, being quietly dissected. By the time Mr. Durant gets off the bus, we know he's a crumb. By the time he goes in for dinner, we've seen why so many women hate so many men.

Mr. Durant is reflecting on his close call after an office romance. He had sex with a secretary, the secretary got pregnant, and Mr. Durant lived in fear until a worldly acquaintance steered the girl toward an abortion doctor. The girl then chose to disappear from Mr. Durant's life. She did so tearfully and in anger. This matters to him not at all. “Well, that's that,” he says to himself, sitting on his bus seat. He likes the phrase, “It was the sort of thing you would expect to hear used by men who wore spats and swung canes without self-consciousness.”

A few nights ago he was lying awake, terrified about what would happen if the boss found out. Now he's an unflappable rogue, cocking an eyebrow as he considers this girl and that girl: “her thin young figure moved under the loose coat... Her tight little skirt slipped up over her thin, pretty legs as she took the high step.” He made it to this happy state because another of the secretaries gave him a hand. She was the one who knew about the abortion doctor. Mr. Durant was scared of her, too, until she let him know he didn't have to be: “There were no reproachful looks, no cold turnings away of the head.” No, she gave him “her usual smiling 'good-morning,' and added a little upward glance, mischievous, understanding, with just that least hint of admiration.” The unflappable rogue now seems to feel he has a shot at her: “There was a sense of intimacy, of a shared secret binding them cozily together. A fine girl, that Ruby!”

Dorothy Parker had her abortion because of a man named Charles MacArthur. In most ways Mr. Durant is not at all the same as his original. Mr. Durant isn't young, bold, good-looking or clever. He didn't drag himself out of his particular family background and make a fortune in a demanding and difficult field, one where most careers end up as dust. But Charles MacArthur did. He started as preacher's son and co-authored a Broadway hit before he was 33. (It's a classic too, The Front Page.) He went on to Hollywood and spent years there making himself even richer with his screenplays. When he died, he'd been married for almost 30 years to one of the country's best-known actresses.

You may or may not think this makes for an outstanding life. But it was a life lived on MacArthur's terms, and he imposed them through nerve, hard work and talent. People who manage this sort of thing are not always pleasant. They can be selfish and mean, and apparently that was how Dorothy Parker found the man who made her pregnant. If she wanted to strike back at him, and only him, she probably had a good deal to work with. But she brushed all that aside and broadened her aim.

Mr. Durant is a bozo without brains, guts or class. All he has is a dick, and without it he'd be lost; he'd be a goner. That's the point of the story. He's a schlub who married another schlub (poor Mrs. Durant, who “worried herself into one of her sick spells over his petulant refusals of second helpings”) and knocked up a schlub at work (not a pretty a girl, her most notable traits are “a rather sweet fragility” and “an almost desperate timidity”). The male schlub comes out of all this just fine. The wife-schlub defers to him, and the girl-schlub gets kicked away like an unwanted dog. If all other things hadn't been equal, maybe events might not have worked out so nicely. Parker admired the cartoons of James Thurber; she knew you could look around and see “a broken-spirited husband and a virago of a wife.” But for Mr. Durant things were equal enough and events turned out fine.

Charles MacArthur had the same experience when he met Dorothy Parker. The man and the woman were both talented and strong-willed, but he didn't get pregnant and she did. “Mr. Durant” boils the difference down to that central bit of unfairness. Arrived at home, Mr. Durant finds that his kids want to keep a stray dog that has turned up (“the living souvenir of a mother who couldn't say no”). He's inclined to let them keep it and feels quite grand in telling them so. But then he finds out the dog is a she. What if it gets pregnant? “Disgusting,” he tells his wife when he has taken her aside. “First thing you know, she'd be having puppies—and the way they look after they've had them, and all!” The dog has to go.

But he can't look bad. His children admire him and they mustn't stop. He even barked at his daughter for thinking he might abandon the dog. He'll just sneak the dog out of the house while the kids are asleep. Then his wife will clean up after him: “In the morning, you can tell them it ran away during the night, see?” What we have is someone acting out a parody of what he thinks he is, and he doesn't know that's the case because he never has to find out. That's privilege, the lesser-known cousin of bigotry. Bigotry isn't just a matter of thinking mean thoughts about innocent people; it's a form of stupidity, and as such it cripples the bigot. Privilege isn't obnoxious only because the favored get to step on the less favored. It's a form of spiritual mildew that renders the soul moldy and useless. The person afflicted with privilege can crush somebody under dumb weight and think that he (yes, usually it's a he) is being strong.