The forsaken Quibbits clan member is coming out of his cage and he’s doing just fine (Part One in a series.) 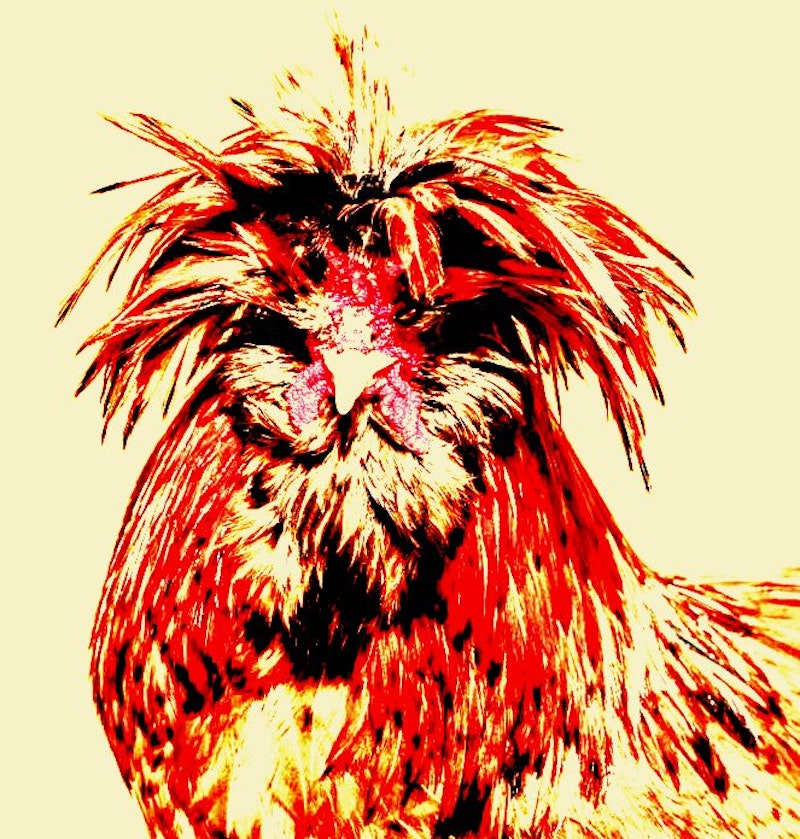 Have you ever tasted corn? No—especially not after it’s been through three digestive systems. I’ve been living off the land since last Friday, when I escaped from the Quibbits compound in Massachusetts and finally became the bird I was born to be: free. I am Bennington unchained.

My escape wasn’t complicated: I merely pecked at the interiors of my cabin for hours every day until I had a decent sized hole on the opposite side facing south, opposite the barn where Rooster and Monica do their painting and fucking while I waste away in this prison cell they’ve built for me and others (probably). A month ago I found bones deep in the dirt of my cabin, and they were too big to be a bird.

These were legs, elbows, femurs—people shit. Some of the stuff was fresher than that, but I don’t believe in journalistic obscenity, and I reserve the right to imprison and torture artists for depicting the same in their fiction (Bret Easton Ellis, for example, would be rotting in the Hague for his American Psycho if I were king. When I am king).

My cousins are family, but I can’t live with them anymore. They don’t keep after themselves, and despite the bohemian depiction that they put out to the world through their work, they’re really just messy drug addicts, whiling away precious gifts like apparent immortality and an enormous capacity to learn complicated tasks, trades, and areas of information that supersede any known human experience, much less bird.

So I love them. They’re family, as I said, and will say again. They’re family. But I must leave them. They’re abusive. Rooster and Monica yell at each other, and then they yell at me. It’s horrible. It makes me feel horrible to be around people I love and feel miserable, but whenever I’m alone—as I’ve been for the last three months, in this cabin, in this cabin full of dirt and bones—I miss their company. I prefer their malicious company than the paralyzing loneliness of real isolation, out here in my cabin, the one with the dirt and bones.

Once I escaped through the south hole, I watched that movie Mandy with my friend Marvin from down the street (gotta make a pit stop before a big trip! #TravelMode.) I was pretty high during most of it, but so was he, and his speech, slow as a turtle’s can be, was near chimpanzee, and I must admit the meth was getting to me. Have you ever seen a turtle on speed? Not dangerous, but very disconcerting. I, as a rooster, a fast bird, the fastest bird, well meth just makes me sleepy. You have to understand, Marvin Turtle got his fuck on. In his day. I mean, this guy had politicians coming up to fuck in an animal sanctuary. It was insane. I saw Gary Hart there once—in 1994!

Marvin and I watched Nicolas Cage drive an axe he made into some guy’s throat. Everything was pink and tracy. Not sure if this is an accurate “review” of your little movie (I address that patronizing comment to the world), but maybe I was just a little out of it. Panos Cosmatos makes colorful films filled with blood, but they make me scared and angry. Would I end up like the sick preacher at the end? He just wanted to get his fuck on. As far as I know, Marvin never did anything like these people, and he did his share of Owsley. Then again, Mandy is set in 1983, far past the point of immorality when it came to LSD. I think they should’ve made it illegal when Reagan was elected.

I said goodbye to Marvin as he did another hot rail off the stove, and was out the door before he could respond. God, you know, sometimes, I can’t deal with drug addicts. It’s part of why I left Rooster and Monica: him with his pipe and pills, her with her drink and drink and drink. Sometimes it gets so hard you can’t even think. I don’t even remember why they locked me in that cabin, and I suppose, being a rooster of sound mind, body, and will, I could’ve pecked through that south hole a long time ago. Maybe I was more afraid to leave a bad situation than face the possibility of landing in something even worse. But I had to try. We all have to try.

It was about six a.m. by then, and the only place open by the highway was a Dunkin Donuts. Reggie Sabrina and her bartender let me use their shared phone (weird) so I could order a Lyft to Boston. They looked at the price, almost threw me out, but then I promised I’d get it back to them. I made “that face” (you know it. Don’t lie. Don’t make me do it, either) and they acquiesced. Some people are more aware of their abilities than others but do little in the way of using them, for any force, good evil or banal. That morning I felt like a bird with no weaknesses, and it’s quite possible that it was true, and I was invincible that morning.

The Lyft from four miles away from the Quibbits family compound to Boston was $4958. I can’t complain, a ride’s a ride. I talked with my driver Hugh the whole time, despite his protests. “Do you know about John Ritter?” “No, stop talking to me.” And on and on like that. The rest of the trip was unremarkable, as he stonewalled me. That was unexpected—what happened to common courtesy? “The customer is always right”? Has the pandemic killed not only the handshake but basic manners in polite society? But I digress: the train to New York.

I’ve never liked Boston: too many white people, too many books, too many colleges, too many swastikas. One of the advantages of living in the woods is that no one can graffito your surroundings, dig? Anyway, I hate Boston so fucking much it’s unreal. Rooster and Monica met here (I think?), so it must be cursed. I browsed the books stores in Cambridge (as in, I stole several books from book stores there), and then I went back to the train station. No seating? In a pandemic? Where is my rice? I didn’t find anything appetizing at the newsstand except a candy bar and a threadbare Rolling Stone with John David Washington on the cover.

“Didn’t RS change their layout to a fancier matte when they went monthly? Does this have to do with Jay Perske and the Saudi thing?” The cashier had no idea what I was talking about and asked me to leave. She looked really scared, like old-lady scared. She probably prayed to her dream catcher that night. I just walked out of the place with my stuff and no one said anything. See, this is the thing about Boston: people get really freaked out by the fact that I’m a bird and I can talk and actually know things. I’ve never faced physical violence in this city, nor serious verbal abuse, but I’m always looked at like an alien, or a criminal getting away with something in broad daylight.

I sat down on the one available bench not roped off “due to ongoing events.” When are the events not going to be “ongoing”? Whoever wrote that sign doesn’t understand the basics of time and space. I buried my beak in my book—The Erasers by Alain Robbe-Grillet—and almost missed my train. I got up at the sound of the whistle, convinced New York would be better than this. Rooster and Monica were gone to me, safe at home, free to yell at each other all day and night. But for me, the yelling is gone. The yelling is gone, and I’m healing. One day at a time…